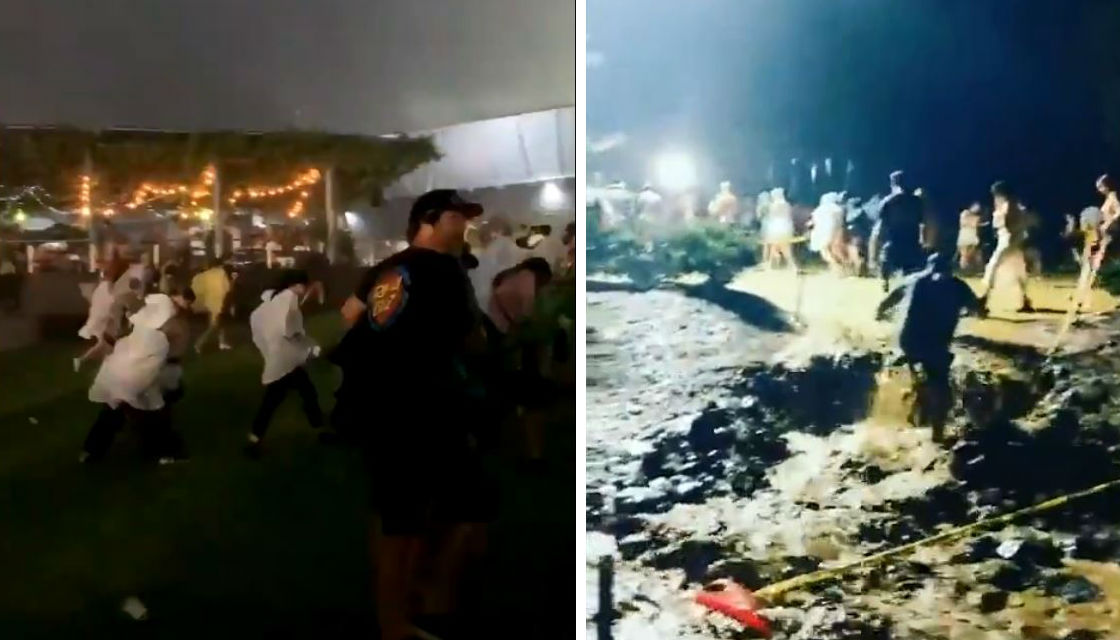 A festival in Australia headlined by The Presets, Hayden James, and Hot Dub Time Machine is being dubbed Fyre Festival 2.0 after a disappointed showing culminated in a “dangerous” weather event and festival cancellation.

Wine Machine is a traveling festival with five dates across Australia in March and April. This past weekend, the festival came to NSW where it was met with a variety of challenges including weather and staff.

While tickets to NSW Wine Machine were only $150 versus thousands of dollars at Fyre Festival, the conditions of the former are getting it compared to the latter. Around the time that The Presets began their set, a massive thunderstorm rolled in and the festival was moved to be cancelled and the attendees ushered out into the cold and rain.

“When the storm hit, you guys were not concerned about the safety of your patrons,” wrote one attendee in a now-deleted post, according to Newshub.

“It was ‘how quick can we kick them out into the lightning’. A tree came down in front of us and a guy broke his leg. So much for duty of care. You need to start thinking about your customers and not the $$$. Disgusting.”

Issues with food and drink were felt long before the weather turned bad, as well. Reports of long queues came in from attendees; this was due to “severe understaffing” from “two minibuses carrying 32 members of bar staff breaking down,” writes Newshub.

NSW licensing laws also limited attendees to two drinks per person, which only served to fan the flames of an already impatient and tired crowd.

The internet has become quick to label any festival with even mild complications as Fyre 2.0, as trolls rule the comment sections; however, from the videos and details released of NSW Wine Machine, the comparison rings more true here than many other places.

As those in attendance well know, The Hunter Valley last night experienced an extreme weather system that included torrential rain and a high multitude of lightning strikes within close proximity causing an initial show stop and eventual evacuation of the event. This sucked for every single person on site! The safety of all patrons, artists, and staff is of absolute priority. Evacuations of this nature are never pleasant. If you have feedback on the method by which police and or security managed this please email the WM team at [email protected] and we will come back to you personally.

We must also address bar lines earlier in the day. Due to the current climate in NSW, severe licensing conditions were placed upon the event limiting drinks to two per person causing unacceptable congestion at the bars. Adding to this were staffing issues from our external bar operators Prime Collective who’ve issued the following statement:

“Whilst licensing restrictions played a significant role in bar congestion at the Wine Machine NSW event, we must unreservedly apologise for our role in this and take full responsibility. Two of our staffing mini-buses carrying 32 staff were reportedly involved in an incident whilst en route from Sydney resulting in bars being under staffed.

We are currently investigating the circumstances of this and following up on the conditions of those staff involved. If you would like further information on this or the licensing restrictions please email us: [email protected] and we will come back to you.”

Lastly, stay tuned in the coming days for an announcement from Hot Dub Time Machine who is hoping to throw a complimentary make-up show for those disappointed he didn’t get to play.