REPORT: Ultra Singapore In Jeopardy of Cancellation This Weekend

UPDATE 6/4 10:03 a.m. | Ultra Singapore has issued an official statement assuring fans that the event is still going on. The event’s silence in addressing the rumors was due to the logistics of moving to a smaller venue. Ultra Singapore has been relocated from ULTRA Park to B2 Sands Expo and Convention Centre at Marina Bay Sands.

While Ultra in Miami is dealing with its own host of issues, one of Ultra’s international events might not be happening at all. Rumors are now circulating that Ultra Singapore is woefully under-prepared for their event this weekend and tickets still have yet to be sent out to attendees. 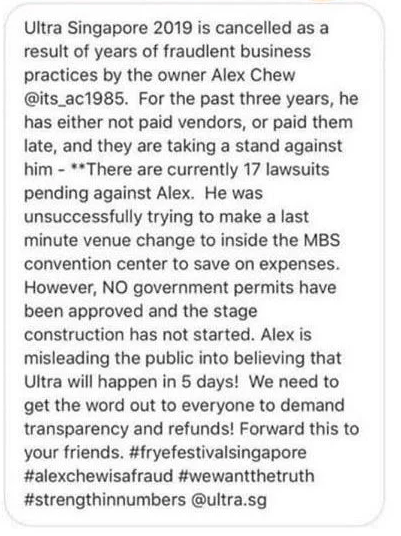 One of the main pieces of alleged evidence driving the rumors is a supposed message being circulated on social media, shared with MS News (right). There’s no sender or recipient attached to the image, but it accuses the owner of Ultra Singapore, Alex Chew, of “years of fraudulent business practices.”

(Ultra routinely works with local promoters for its international events.)

According to the message, a litany of pending lawsuits, lack of permits, and general mismanagement have kept Ultra Singapore from operating on schedule.

“Alex is misleading the public into believing that Ultra will happen in 5 days,” the message reads. “We need to get the word out to everyone to demand transparency and refunds.”

Furthermore, it’s also being alleged that construction on the stage was halted over a week ago for reasons unknown.

Attendees received emails stating that they would e-ticket and wristband redemption information today, June 3. So far, no attendees have reported receiving such information.

Representatives for Ultra did not respond to requests for comment by press time.