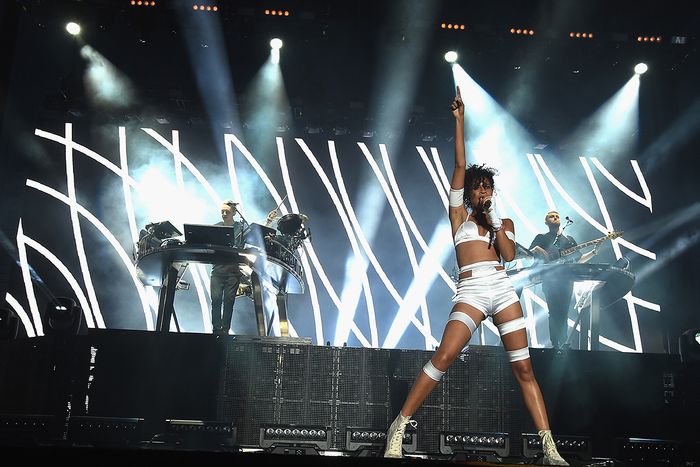 On an episode of the BBC podcast the Next Episode, a series that focuses on #MeToo and people’s experiences in the music industry, Aluna Francis of AlunaGeorge has come forward about her own experience with sexual assault.

In her conversation on the podcast, Francis told the BBC that a past collaborator, whom she wishes to remain unnamed, attempted to force her to perform oral sex on him.

After making music with this person earlier in the day, they’d gone out as a group and Francis couldn’t get home as her phone had died. He offered to let her use his charge in his hotel room, after she’d already asked everyone else in the group and hotel staff and no one else could help her. However, once they were alone in the room Francis said the man became “a completely different person – his behavior went from naught to 100.”

“He thought it was a game. Everything I did excited him more.”

She went on to add that the man “pinned me down and he’d taken his trousers down and he was trying to put his dick in my mouth. So I wrestled him off, and he was still laughing cause he thought it was a game and that I was having a really fun time having a pretend rape situation.”

Francis addresses the shame she felt for not recognizing how wrong the situation was immediately, for compartmentalizing what had happened. She claimed she never considered reporting the incident to the police.

She said escaped the situation, but later returned to the studio where she confronted the man about what had happened in the hotel room. “He did all his apologies and talked about how he was so incredibly sorry and [that] this has never happened before,” she said. “You’re dealing with it all the time. Even if it goes up to a high level, you’re still playing out this role of ‘It’s fine.'”

You can listen to the full episode here.