Today, Minimal Effort announced the lineup of DJs who will be joining them shortly before All Hallows Eve for the 5th anniversary of their Halloween festival to cast a musical techno spell even the Sanderson sisters would envy.

In addition to a lineup, Minimal Effort also announced they will be moving to a new venue! For the first time in three years, fans will not have to exert the high amount of effort it takes to not get lost in the maze of hallways that is the Belasco Theater. Instead, they will be tricking and treating themselves to “an immersive and comfortable Halloween experience” at a downtown Los Angeles venue, that is still TBA as of now. As historic and beautiful as the Belasco is, I am looking forward to the change in location. However, I hope they settle on a venue soon. Minimal Effort hasn’t always had a rock-solid record when it comes to venue selection. I’ve had both the most incredible time at a Minimal Efforts New Year’s Eve party and I’ve had one of the worst panic attacks of my life at an event as well. I’ve seen some of the most incredible art and stage decor, and have seen people decide to start peeing on the walls because there was only one bathroom in the whole venue. So hopefully they lock it down and start planning how to bring in an extra bathroom if needed.

Regardless of the ups and downs, Minimal has faced with its venues, the one thing that has never been a let down is the lineup! All Hallow’s Eve will be haunted with an extended DJ set from Bonobo, who, in addition to his own music, plans on treating the audience with a hand-curated lineup of artists as part of  the Outlier Stage experience that was perfected in Europe before Bonobo decided to unleash it on his North American fans earlier this year. Joining him on the Outlier stage will be a DJ set from Totally Enormous Extinct Dinosaurs (TEED), and Jimmy Edgar and Machinedrum’s future bass J-E-T-S collaboration.

In contrast to the sonically seductive Siren song that will be drifting across the mainstage, Cin Cin label founder Fort Romeau will headline a secondary stage filled with a heavy dose of tech-house that Minimal Effort fans have grown to crave. Alongside Romeau will be the enchanting Öona Dahl mesmerizing the crowd a broad spectrum of deep house, techno, and experimental electronica; Tiger Blood filled techno veterans Prok & Fitch; the emotive and rock-fueled techno icon Victor Ruiz; and Minimal Effort’s own Human Resources. Minimal Effort will make their return to Los Angeles’s seemingly week-long Halloween playground on October 26th. 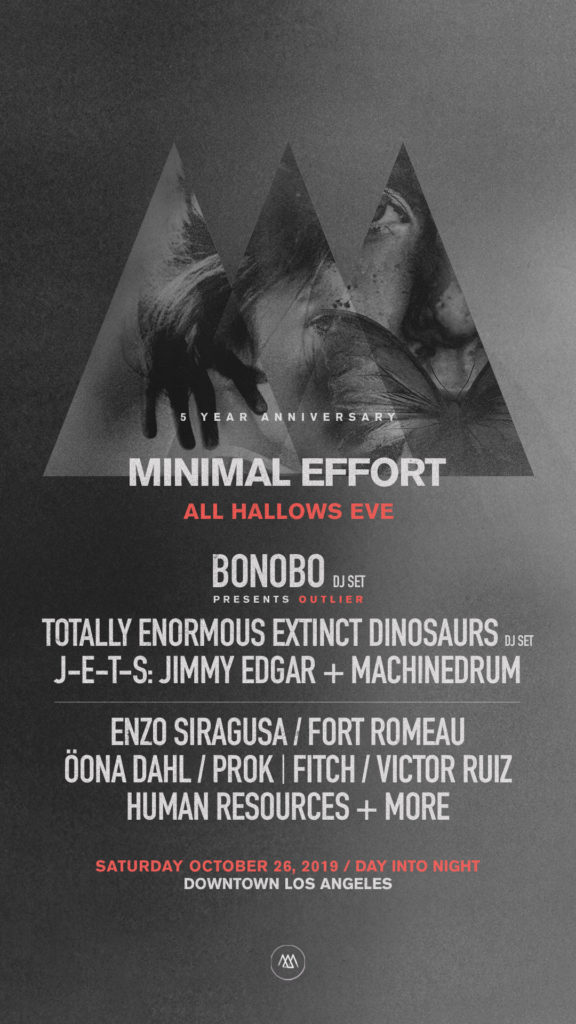