“Are you worth someone trying to spike your drink?”

The owner of Rapture Nightclub in Perth is under some serious heat for the way he responded to a young woman’s concerns about security at his club.

Shantel Smith, 19, believes something was slipped in her drink at the establishment. She attended the club Saturday night with some friends when she became disoriented after just a few drinks, only one of which came from Rapture. 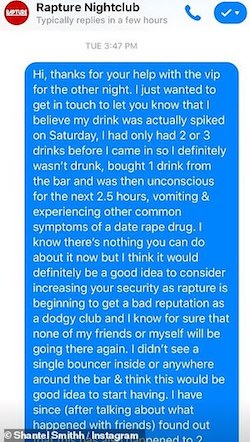 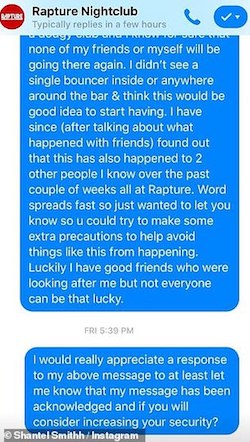 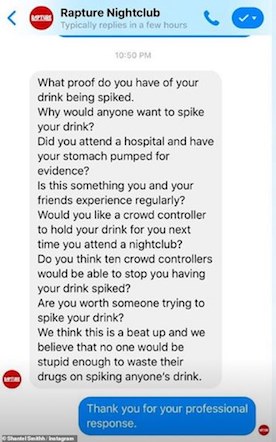 The response was rude, condescending, and severely unprofessional. Not only were her suspicions about being slipped the date rape drug completely dismissed, she was victim shamed.

Rapture’s reply, which came from owner Neil Scott, called the claims a “beat up.”

We think this is a beat up and we believe that no one would be stupid enough to waste their drugs on spiking anyone’s drink.

Yeah, because that’s never happened before.

Thankfully, the cringey response did not go unnoticed. The screenshots have since gone viral and hundreds of people have blown up Rapture Nightclub’s Facebook page voicing their disapproval.

We had 14 staff on duty, at no time did any of the staff hear about a drink being spiked.

That time span is actually 3 hours and 55 minutes. And later to 7 News, he referenced security footage of Shantel and her friends:

I could see that she obviously hadn’t had her drink spiked, and it was just a silly message.

I responded accordingly with a silly message too. That’s all it was.

We’ll leave you with this brilliant, 1-star review for Rapture Nightclub.