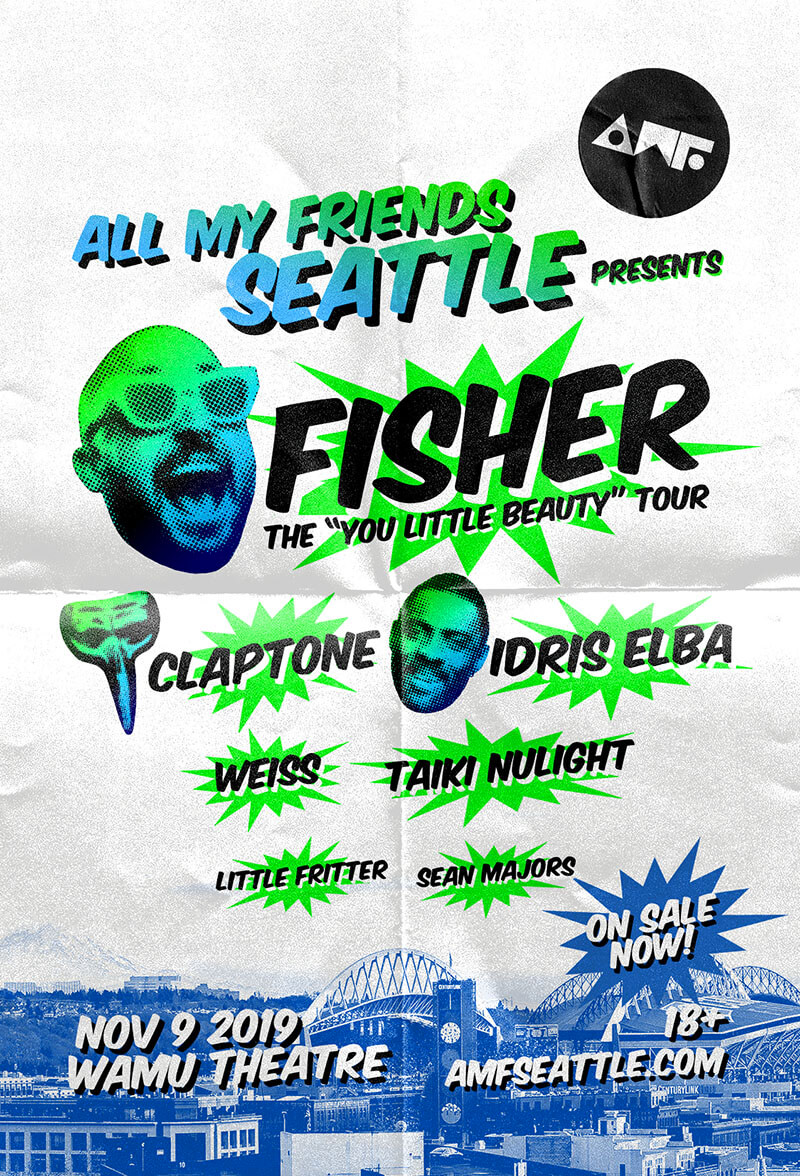 AMF knows how to put on a party. Whether it’s on their cruise, in downtown LA, or in Seattle, they always seem to create an electrifying atmosphere that is fueled by this air of positivity. Attending their shows really make it feel like you’re stepping into a family. No matter the genre, there always seems to be this sense of community. Last month AMF threw a massive two-day festival in Downtown LA, featuring a one of a kind lineup with artists like Justice, Black Coffee, MK b2b Diplo. Needless to say it was a huge success.

This past weekend was no different, as AMF returned to Seattle for one of the most highly anticipated shows of the year featuring another stellar lineup: Idris Elba, Weiss, Little Fritter, Taiki Nulight, Sean Majors, Claptone, and Fisher. This is the first time I’ve seen all of these artists on the same bill together, and it couldn’t have been a more perfect grouping.

Hosted at Seattle’s WAMU Theatre, I couldn’t help but feel this buzzing excitement and anticipation the moment I stepped inside. Seattle local Sean Majors opened the night with a groovy tech house set that warmed up the dance floor in perfect fashion. Little Fritter followed and kept the house vibes flowing wonderfully as more people began pouring through. Taiki Nulight stepped on after and tore it up with his signature night bass style and even threw in some classic throwbacks in the set that had the entire venue signing along too.

Weiss stepped on the stage next for his first ever show in Seattle and he did not disappoint. Weiss is a legend in his own right and watching him seamlessly mix in classic dance tracks with current ones was incredible to see. When “Feel My Needs” came through the speakers I noticed a big smile spread across a few of the people’s faces around me, during that moment timed seemed to stand still as I listened to thousands of people sing back the song then just break out into dancing as soon as it hit the drop; that was truly a special moment.

As Weiss finished the crowd roared as Idris Elba began to take over the decks. It’s one thing to see him kill it on the big screen, but seeing him rock a crowd for a hour was an awesome experience. Idris had the crowd hooked on everything he was doing, playing a mix of deep and tech house. The energy only heightened as he introduced another legend, none other than the Masquerade man, Claptone.

The crowd was already electrified, and just when I didn’t think the energy could go higher, Claptone took it there. He was dialed in with every single song he played, acting sometimes as a conductor, sometimes drumming in the air, all the while mesmerizing the place with an amazing array of house tunes. Tracks like the Format:B remix to “Bang The Groove” or his edit of Billie Eilish & Justin Bieber vs. Local Dialect & Gorgon City, titled “Bad Poseidon Guy”, absolutely killed.

As midnight was about to strike, Fisher stepped up to the decks and when the crowd saw him, there was a deafening roar, this was the moment the entire night had been leading to. Again, the energy transcended into new heights with Fisher behind the decks, setting the WAMU theatre off with tech house heaters that had people absolutely losing it. By the time Fisher wrapped up, it’s safe to say he left Seattle in a state of awe and bliss.

AMF yet again put on an incredible show in Seattle and from the looks of it, this is just the start of many more experiences AMF will host in the Emerald City. Wherever you live, I highly recommend making an effort to attend an AMF event, whether you find yourself in LA, Seattle, or on their Cruise, you can count on meeting great people and having a exciting experience that will last you a lifetime.

Buy Tickets to the Friendship Cruise 2020