by Jacob Marmor
in Events, Featured

I have never been a big fan of Commercial House music but when I heard that Swedish House Mafia would be embarking on their last tour I figured that this would be one show I simply could not miss. On top of the ultra-famous trio that would be performing that night I would also be treated to a warmup set from the house legend, Pete Tong. I went in not knowing what I would be getting in to but I was excited nonetheless.

I arrived at the Barclays Center around 8PM to find the hallways and elevators absolutely packed. I finally found an open elevator and hopped in, the heavily intoxicated crowd followed me and packed in. I was pushed up against a group of girls who were attending to their semi-conscious, presumably drunk friend. They were asking her if she was going to throw up to which she shook her head in a drunken manner and mumbled no. The elevator attendant checked with the girls to see if she was okay (which she was not in my mind) and then continued to bring us to our floor. Finally we reached the floor I needed to be at and I happily jumped out of the elevator and headed down to the floor where Pete Tong was already in the mix.

I looked around the arena to discover it was relatively empty. I was a little shocked at the lack of people because in my mind Pete Tong is one of the most respected House DJs on the planet. After spinning commercial house for a bit Tong delved into a rocking and intimate house set that was nothing short of impressive. Unfortunately, the crowd was unable to appreciate the talent at the decks and were socializing and drinking. A handful of us at the back of the mob that was the GA floor were enjoying ourselves quite a bit however. At around 9 Pete Tong announced to the crowd that it was around 30 minutes until Swedish House Mafia would be gracing the stage. This cued throngs of people to begin filtering out, apparently they did not care much for talented DJs.

Pete Tong then ended his set and exited the stage to a spattering of applause. The crowd began to grow, I suppose word must have spread that SHM would be on stage shortly. The crew set about changing the stage in preparation for Swedish House Mafia. Every time something changed, a light moved, a flashlight appeared etc. the growing crowd would scream and cheer anticipating that SHM would be on stage shortly. After about 20 minutes of changeover the finally packed Barclays Center had something to cheer about, Swedish House Mafia were prepared to take the stage.

After an introduction video the curtain dropped to reveal the men of the hour who were playing a classic SHM track, Greyhound. Although it took the crowd a bit to realize what song was actually playing they figured it out by the time the track dropped and the place went absolutely insane. Never have I ever seen a crowd explode like that, people were going insane from the GA floor to the VIP to the 200 level.

I felt like I was at a rock concert, insane pyrotechnics and lights lit up the crowd. Swedish House Mafia played for about an hour and then all of a sudden a curtain dropped. I was very confused, never had I heard of a DJ stopping their set half way through. After a few moments of silence another video appeared on the white curtain and Together (The Attic Intro Edit) began to play. I was still pondering why they had stopped mid-set when the curtain dropped again to reveal the Swedes and the crowd went crazy. 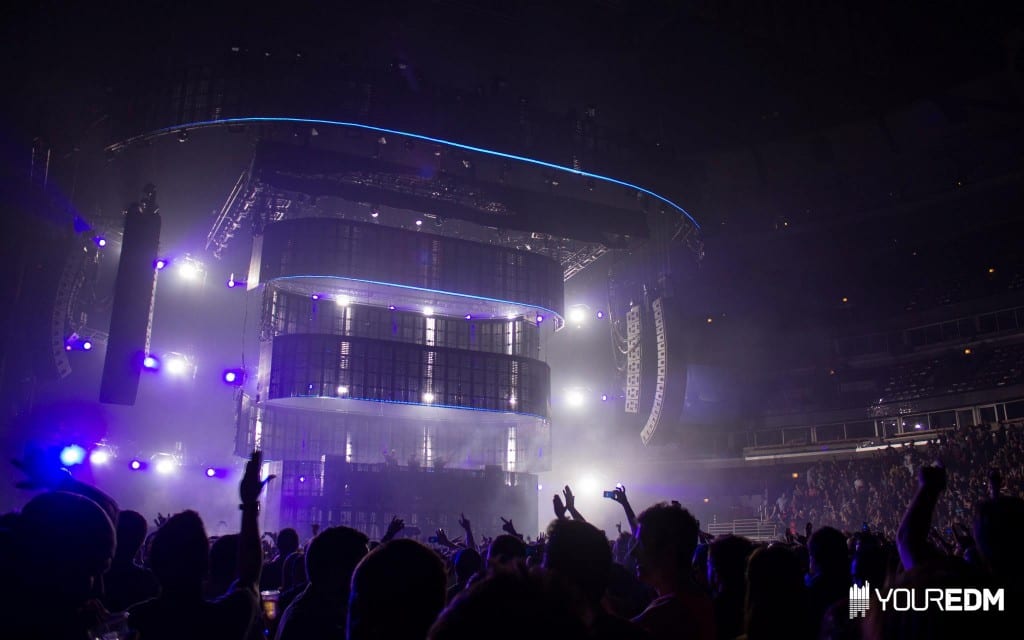 From Together (The Attic Intro Edit) they went into Axwell‘s recut club version of Michael Calfan‘s Resurrection, then Hard Rock Sofa and Swanky Tunes‘ Here We Go followed by the Swedish House Mafia classic, Antidote. They continued on with other tracks from their recently released Until Now compilation including Leave The World Behind, Adrian Lux‘s Teenage Crime and Miami 2 Ibiza during which they asked the crowd to sing (well rap really) along to, they were more than happy to oblige. A little while later they played the unavoidable single Don’t You Worry Child and the crowd sang along deafeningly.

They then moved in to a section in which they played Sebastian Ingrosso‘s Kidsos, Calling (Lose My Mind), the old Quintino banger Epic, and Axwell‘s mix of In My Mind. At one point they played Every Teardrop Is a Waterfall (Coldplay v. Swedish House Mafia). When the track reached the lyrics “But I’ll still raise the flag” the graphics burst into red, white and blue and SHM waved American flags as pyrotechnics sparked (see the picture above). One of my favorite mashups of the evening was when they played One v. Atom which sounded absolutely massive in the arena. Things seemed to be winding down and they played Temper Trap‘s Sweet Disposition. The screens went black displaying only the words “a moment, a love, a dream, a laugh, a kiss, a cry, our rights, our wrongs”. It seemed as though the night was drawing to a close but it was far from over. They came back and played Don’t You Worry Child once more then another 20 minutes of music closing with the vocals from Don’t You Worry Child. 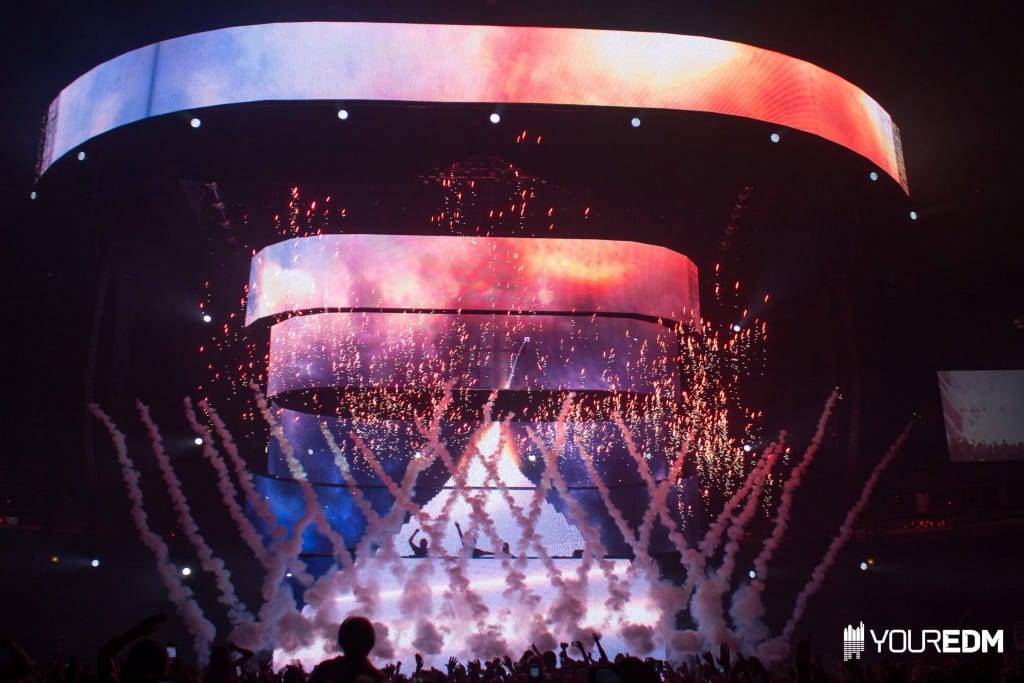 From Pete Tong‘s DJing brilliance to Swedish House Mafia playing all the classics, it was an experience that will not soon be forgotten. The show was spectacular and I think the people behind the scenes doing the lasers, lights, pyrotechnics and video sequences deserve a huge amount of credit for making the concert especially extravagant. I may not be proud to identify myself with most of the people there that night but I have to say that the energy in the Barclays Center was phenomenal. All in all the night was memorable to say the least and was the source of many stories that will be told for quite some time. 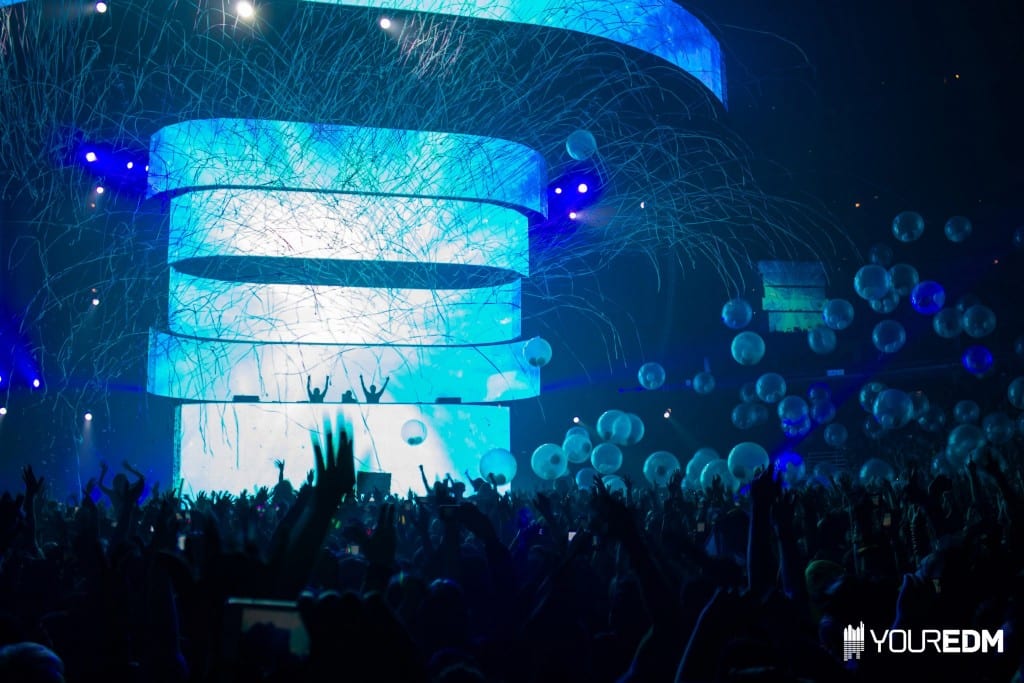 Some of these photos are not from the Swedish House Mafia stop at the Barclays Center.