NOTE: A big thank you goes to ElectronicDanceMusic.com for tipping us on the release. Follow them on twitter here: @edm

Yes, you read that right, two of the most sought out rising stars in the industry have collaborated. And yes, it’s perfectly normal that you’ve never heard of it until now, mainly because no one has been looking for it. Neither artist promoted nor advertised it, but why is that? Well maybe they just wanted to forget about it, ignore the fact that it ever happened, or simply try to leave the past behind. Whatever the reason may be, the label, Yawa Recordings, finally decided to release the collaboration last October. Even then, why did no blog, site or other news source pick it up? I mean, there are at least quite a few people roaming the web searching for these two’s next preview, ID or whatnot. That’s because it was released under their old aliases. Unbeknownst to many, Madeon was not always Madeon and Porter was not always Porter Robinson. Back in 2009-10, when this collaboration was supposedly made, Porter Robinson was also known as Ekowraith, a handsup fan, creating music heavily influenced by Japanese video games, more specifically Dance Dance Revolution. While on the other hand, young Hugo Leclercq went by DJ Deamon (if you rearrange the letters you get Madeon) and Wayne Mont. At the time, both artists perused the same producer forums in search for advice, tips or just to chat with similar minded people, and we can assume that’s how the two met. That being said, this track is rather old and reflects the artists’ sound back then, so you should listen to it with an open mind and appreciate it for what it is and how different it is from their sounds today.

The collaboration itself is a remix of a previous song produced by Porter Robinson, also as Ekowraith. While it hardly resembles their current musical approach, it is a fun look into the past of these producers. Enjoy!

For anyone interested, here is a screenshot of Deamon complimenting Ekowraith for his release of Say My Name back in 2010. You can read the full thread here: Link 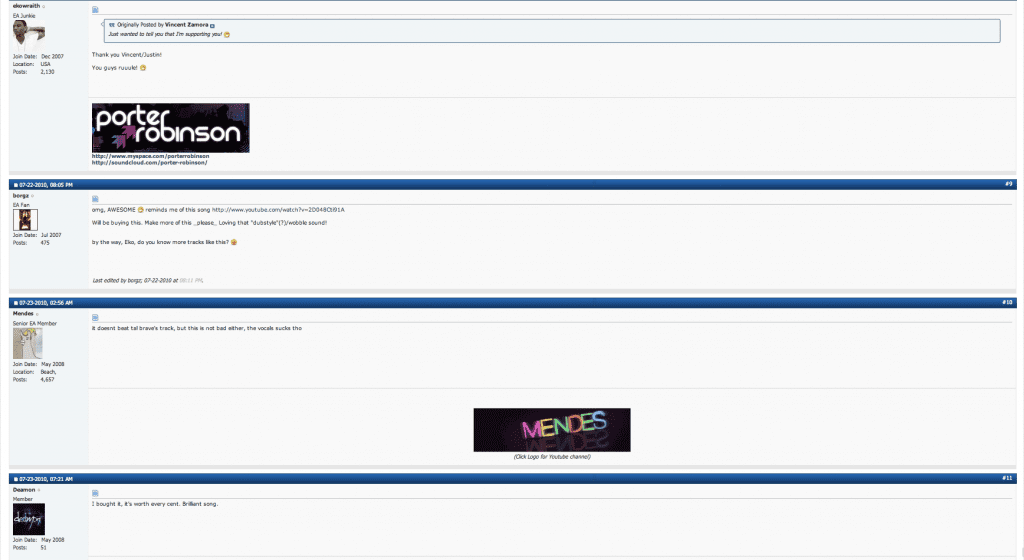