From Love at First Sight to Main Stage: How Sunnery James and Ryan Marciano are Making it in this Lethal Industry

by Jacob Marmor
in Featured, Interview

Sunnery James and Ryan Marciano are an interesting case. They occupy lineup spots that are normally reserved for chart-topping producers. So what is it about Sunnery and Ryan that puts them in those positions? Energy, an unparalleled understanding of how to DJ, passion and chemistry. Sunnery and Ryan also didn’t meet as many of the other DJ duos have. It was not in a club, it was not online.

“Ryan needed an internship. I was working at a store at that time and I was in charge of the interns. My boss asked me what I thought of Ryan and I told my boss that he’s a nice guy, I didn’t really know him but he seemed like a good guy. That was 16 years ago, no we are here. From day one we had the same interests. It was, to make it really romantic, love at first sight.”

Then Ryan interjected and changed the romantic mood, telling me that “A month later we both got fired.” They both erupted with laughter.

From there I was curious how they got to where they are now; rocking the main stages at some of the world’s biggest festivals.

“We started because we really love DJing,” Sunnery said, “We are DJs first, then producers. When we started producing we didn’t produce for hits, we just produced for our sets. That is really what we are still doing. Sometimes you have to go out of the box and make something more mainstream to get people’s attention. But still we are just making music for our sets. We really have our own sound. We want to stay close to ourselves, keep to who we are, and that is what we have gotten recognition from. I think that is why we fit in with those big climaxes. Steve Angello tells us that if we keep doing this, we are going to be the biggest. So fingers crossed! I mean, we are just doing what we love.” For the duo, it really just comes down to having fun. Ryan continued Sunnery’s thoughts about becoming big: “It isn’t like we want to be the biggest, we just want to have fun and be successful.”

The conversation then moved on to one of their set staples, the quintessential Sunnery James and Ryan Marciano track, their remake of Tiesto’s classic: Lethal Industry. They were in search of a certain sound that they came across in Lethal Industry. They made a bootleg of it and as Ryan says, “it was just for fun”. Sunnery picked up the story from there saying that they then got a call that changed everything:

“Tiesto called me and said ‘just release it again under your name, as a cover’. I didn’t even know what to say. I was like ‘ what do you mean? It is going to just be Sunnery James and Ryan Marciano’s Lethal Industry?’ He said ‘Yeah, just do it’. Then boom! It was a big hit, it was one of our first top ten tracks on beatport. I think we can still play this track for the next ten years, because it really just keeps on grooving. I think maybe in a few years we are gonna make another song like that and that is how we will keep in the industry of hype.”

Sunnery also spoke a bit about building a relationship with crowds and reading the crowds’ reception of the music: “Nowadays when you see hands in the air, then it’s good. We want to see hands in the air but we also like to see people grooving…A DJ set is like a story. You go see Carl Cox and you can dance for 7 hours and not even know it.” Sunnery and Ryan love the churning beats that dance music is rooted in, they love to see the crowd dancing but as Ryan says: “it is hard to do that in one hour.” 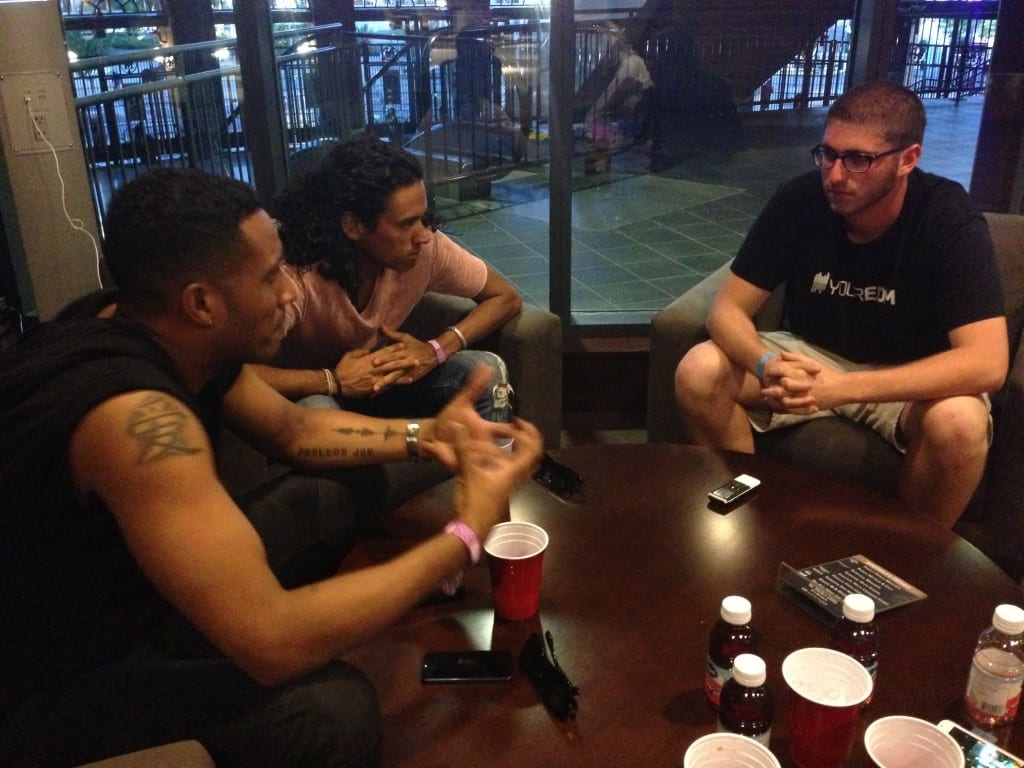 Sunnery James and Ryan Marciano don’t talk about their sets before they play them. Sunnery says it is really hard when they only have a short time to play: “We get in the car and we say ‘ok, we have 40 minutes and we want to play this, this and this.’ That is really hard for us because we want to really be able to get into it.” So do Sunnery James and Ryan Marciano pre-plan their sets? “No”, Sunnery said. Ryan continued saying: “We know how we start, then we look at how the crowd reacts. Going up there knowing all the tracks you are going to play is so easy, we want to do it the hard way.” “We are really stubborn”, Sunnery explained, “We know we can go up there and play this, this and this and crowd will have their hands up the whole time. It is really about us, about the DJs.” Ryan took up where Sunnery left off: “We want them to go home and be thinking ‘they played that song and I have never heard it’. I mean just look at the track ‘Now Let Me See You Work’. Thanks Carl Cox for that. I heard Carl play it once, I had heard the vocal sample, but when I heard the full track I was blown away. So then we started playing it, and we are more mainstream than Carl, and we started playing it at all these big festivals and people went crazy.”

Ryan told one story about playing that track at a Dayglow (Life in Color): “We actually did a Dayglow party, which was like a really young crowd. We finished our set and were backstage, then all of a sudden the kids start chanting ‘now let me see you work, now let me see you work'” Sunnery picked up the story from there: “Then we ran on stage. We felt like such idiots, I mean how could we not play that song. So we played it and the crowd went crazy. They were jumping all over eachother like a bunch of little kids, it was nuts.”

So dance music altogether, with a mess of DJs and producers, how should people approach that?

“We need to start focusing on dance music as a whole”, Sunnery explained, “That’s the thing about EDC, they approach it with the people as the headliners, the people in the crowd are the ones making the party. To be honest if I were to listen to the (Beatport) top ten, there’s maybe only one song I like. If you go into the top 2000, then I like track 1542.” “For us, that could be number one”, Ryan threw in. Then Sunnery continued, saying: “You can’t focus on the big songs becuase every DJ is going to play the same shit. Then the whole perception becomes ‘oh, we already know what this DJ is going to play’. The people have to be surprised.” It is not an easy way though, Ryan says: “It takes time, you have to find those songs. But when you play that track, and everybody goes nuts, the feeling you get is just amazing.” This makes it interesting for the two of them as they DJ as Sunnery explained: “Sometimes, he will find something, and won’t tell me, he just plays it. Then I am just standing there like ‘what the?!?!?’ (laughs). It makes it much more fun.”

The future looks bright for Sunnery James and Ryan Marciano. They are two main stage DJs that really understand, well, how to DJ and that will go a long way for them. We can’t wait to see what they have in store for us over the next few years!

Fatboy Slim On How To Be A Successful DJ