Deadmau5 Fires Off On Not So Unique Future of EDM

by Chris Wood
in EDM News, Interview, You Might Have Missed

A lot of us have seen deadmau5(Joel), can tend to go off the grid and Rant and Rave on Facebook, twitter and other social sites from time to time. For example, like he did recently saying DJ’s simply “press play” which triggered a huge stink among Dj’s, Afrojack in particular. Now deadmau5 is lashing out at Afrojack about his recent comment at the EDMBiz conference in Vegas this past June.

The whole point of this conference is an entire post itself (which you can read here), but for the sake of this article we will cherry pick to keep it focused on the underlying beef between Mau5′ and Jack’.

So, in short, the whole point of this EDMBiz conference is to talk about everything EDM, and to assist, a panel of artists, which included: Afrojack, Dash Berlin, Dirty South, Borgore and more were brought on to provide working professional insight. Afrojack commented on one of the main topics of discussion that really seemed to strike a nerve with Joel which was when this panel was asked, “is there a dance music bubble”? Which in turn, Afrojack replied back, “it’s simple, if you make good music, you succeed, if you don’t, you won’t” and the other artists agreed.

This is what Joel had to say in retrospect to Afrojack’s statement above.

Joel’s response then led to a twitter out lash from Afrojack: 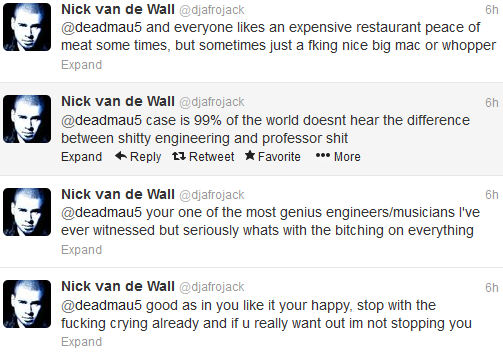 Joel is threatened by Afrojack’s comments, it seems, which, is actually quite good! Being that this conference is in a large part business related, how investors are being called in to talk about how they can capitalize on the vast popularity gain of EDM music. Joel feels threatened because it could quite possibly commercialize EDM to the point of pop music these days which forces songs to follow a specific format. That could eliminate the creative and experimental aspect of EDM to the point where a song would be just pushed through a template.

Razihel & Virtual Riot – One For All, All For One [Monstercat]