Kaskade and Jason Bentley to Create Soundtrack for EDC Documentary

Two days ago, Kaskade had given hints on Twitter about writing a soundtrack for a movie, causing a lot of commotion among his fans trying to guess the movie. 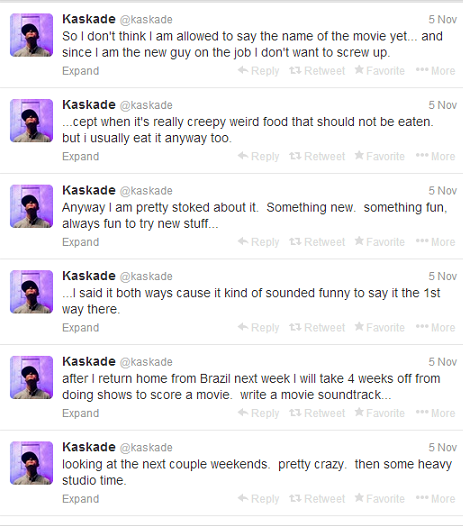 Last night, it was confirmed that the Grammy-nominated artist Kaskade has signed on to create the musical score for EDC’s official documentary, EDC 2013: Under the Electric Sky. Joining Kaskade will be KCRW Music Director Jason Bentley, who will serve as the music supervisor and musical director for the documentary and soundtrack. Kaskade recently ended his sold-out Atmosphere album tour, and  Bentley previously worked as music supervisor and soundtrack producer for  The Matrix triology and TRON: Legacy with Daft Punk, as well as several other film projects.

Pasquale Rotella, CEO and founder of Insomniac, explained his decision to bring the two music powerhouses together:  “Kaskade and Jason understand the energy and passion that EDC fans bring to the festival. By working together, I’m confident they will create a soundtrack which brings back memories for those that have attended EDC in the past, while also inspiring those who have never joined in the experience.”

Kaskade expressed his eagerness towards his upcoming project by saying, “EDC has become an American institution, and there’s a tangible power in such a massive shared experience. Translating that intensity into a film score is an undertaking I’m truly looking forward to.”

The film, which will be released in early 2014, will document the experiences of several festival attendees, or “headliners,” as Rotella puts it – throughout the festival. For hundreds and thousands of people over the last 17 years, EDC has been a festival that has changed their lives in one way or another. We’re excited to have a documentary featuring one of America’s largest EDM festivals, and we’ll keep you posted about more details.

Shazam Your Way To Hardwell’s New Single, ‘Dare You’