by Tyler Trew
in Editorials, EDM News, Worth Sharing

Yesterday, November 25th was the fateful day that tickets for 2014’s EDC Las Vegas went on sale, but it wasn’t without major resentment geared towards Insomniac and CEO Pasquale Rotella. Despite the newly established “Headliner Loyalty Program,” which allowed for loyal attendees of past years to purchase tickets first, the ill will was aimed at the higher ticket prices. Now I don’t wanna generalize and judge everyone, but why does much of our generation feel so entitled that they spew ignorant statements at a BUSINESSman via social media?

I’m not implying Pasquale is a profit-hungry corporate sellout, because that would be far from the truth. People don’t understand what goes into these festivals and the high-costs that come with them. Pasquale, and Insomniac entirely for that matter, do a wonderful job of cost-containment and keeping the prices as low as they can. They have one of the most fan-centric attitudes of any businesses around.

So to the issue; it arose because of the tier system that started at $249 which led some people to believe that they can guaranteed buy their tickets for that cheap. Of course, it sold out quickly and people were outraged they had to buy tickets from the more expensive tiers. The “Early Owl” tickets are what will be on sale starting December 2nd for $345, which is still incredible for a massive festival that spans multiple days. Because of the backlash, Pasquale released a statement addressing the chaos, which you can read below. 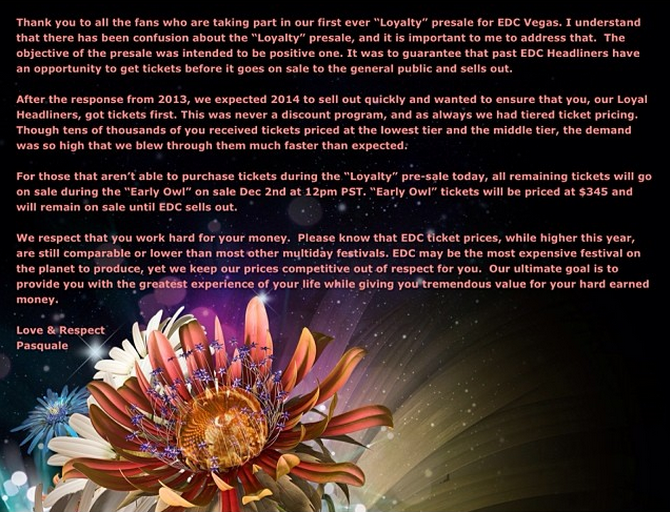 PS, coming from a poor college-student (and writer, obviously) it irks me to hear people complaining about things like this, especially when many deserving individuals and myself can’t make it (or never have) for fiscal reasons or otherwise. If you don’t wanna pay, then don’t. If you can’t, then join my crew and patiently await the day that you can.