“Wolfgang Gartner Decided To Flush Me Down The Toilet”: 3LAU Takes Offense to Wolfgang’s AMA

In a reddit AMA, user aedgar 777 proposed that 3LAU ‘is a joke’ and that Wolfgang would be the perfect man to ‘end his career’.

To which Wolfgang Gartner replied, “Thanks. Me too.”

The comments have since been deleted but not before 3LAU became aware of what unfolded. Unsure and hurt that Wolfgang wished an end to his career, 3LAU replied to Wolfgang and posted a response on his Facebook:

“not really sure what merits this statement, as you know nothing about me. But, for your knowledge, I’m a classically trained pianist, guitarist and vocalist so charlatan is far from accurate.”

However, 3LAU has since deleted his ‘comeback’ and the evidence given below appears to contain some dodgy editing… But as always you can check it out for yourself and let the whole thing blow over until the next nuclear DJ fallout.

UPDATE: Indeed there was some dodgy editing going on. Clearly, there is an asterisk next to aedgar 777’s post, which indicates an edit took place. Noone is to blame, except aedgar 777.

@3lau The post that @wolfganggartner responded to was edited to include you, it originally had nothing to do with you. 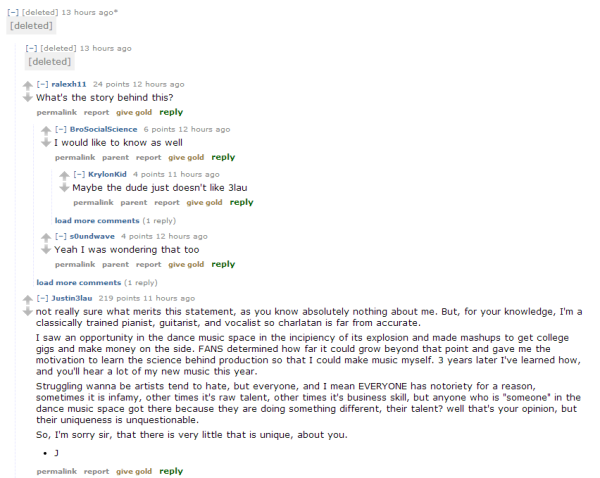 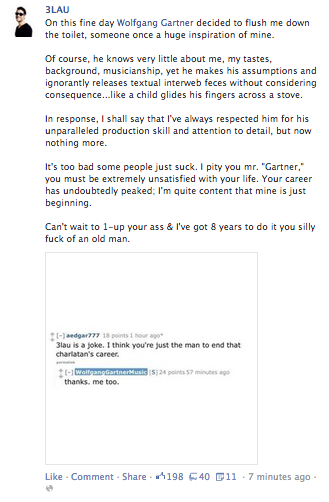 NastyNasty – My Wasted American Youth [Pay What You Will EP]