Kaskade Speaks on His Rise and Trends in EDM

Ryan Raddon, better known as his stage name Kaskade, is often accredited by fans as being the voice of the EDM scene with his inspirational tweets, tumblr posts , and interviews that consistently support and defend our growing culture.

It is no wonder that the Chicago-native has so much to say about the changing trends in EDM, seeing as he has been a part of the scene as a DJ & producer for more than two decades. Kaskade‘s success is recognized through his hard work putting together 8 studio albums to date, with his newest record Atmosphere generating a huge hit single and his biggest tour yet.

For the past three years, Kaskade has increased the production set up with each of his tours Freaks of Nature, Identity Tour, and Atmosphere. When it was time for Atmosphere, the caption “big rooms, small tour” was only appropriate. In response to the big-room-arena feel of Atmosphere, Kaskade claimed,

“In America, dance music is more popular than it’s ever been. It’s the right time to do it.”

This year Kaskade has 2 grammy nominations. When asked how he felt about his chances of winning, Kaskade replied in a tactful and respectable way, typical of his usual voice.

“Oh man, it’s pretty stiff competition. I think the win for me is being in the company of these guys that I’ve respected and look up to so much. Guys like Daft Punk, Pretty Lights and Calvin Harris. It’s just cool to be in the same company as these guys.”

Kaskade also commented on the exponential growth of EDM, and the effect corporations are having on this explosion, such as the the recent acquisitions by SFX. In his classy ways, he admits that he thinks it is too early to tell how this all will pan out, that everyone wants the scene to grow in the right direction, but that the changes will probably not be noticeable until it is looked back on in a few years.  Kaskade goes on to say that he feels the general public is starting to become more accepting and understanding of dance music culture, despite the media continuing to focus on the negative aspects.

When discussing crazy American cities to perform in, Kaskade  notes the obvious: Chicago, New York, Miami, L.A., and San Francisco; but he surprisingly proceeds to credit Dallas as being an overlooked party city.

“What people forget is that when ecstasy was legal there was a big club down there – and it’s actually where they’d throw Lights All Night, this show that played. There was a massive scene down there.”

(He also seemed to have forgotten Philadelphia on his list, so maybe he should stop by the City of Brotherly Love and let us show him how Philly does PLUR.)

Kaskade admits that he is still in such disbelief that he is able to do what he loves doing now on a grander scale, as the height of EDM continues to rise.  It is obvious that his appreciation for his fans is unparalleled. He often interacts with them on Twitter and speaks out about how much he enjoys the interaction with the crowd at shows. The first time I saw him perform live, I could just tell that he truly 100% enjoyed what he was doing. His happiness exuded from the DJ booth. 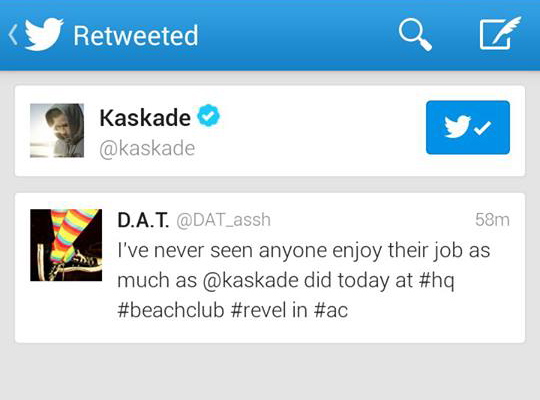 His appreciation for his fan base emanates across all he does and says. When asked if it was satisfying to win “America’s Best DJ” by DJ Times for the second time, Kaskade responded:

“Sure, of course. It’s nice to get these accolades. It’s great, but it’s more important for me to interact with my fans and see them appreciate the music or come to shows and play a night like that at Pacha or go home to play Chicago and have both shows be sold out months in advance. To me, that’s the people voting. I feel like with the awards there are so many ways that people can manipulate Facebook likes; it’s secondary to me.

I really enjoy the fan appreciation, but it’s nice to get awards and be respected and honored. With the Grammy nomination, I’m not the first guy who likes to put on a tie and go through the pageantry of the whole thing; it seems like a bit much sometimes. But it’s also very nice to be recognized by peers in the music industry and take a moment to enjoy that.”

Good luck to Kaskade at the Grammy’s, but no matter what happens, at least he knows he already won us over as fans. 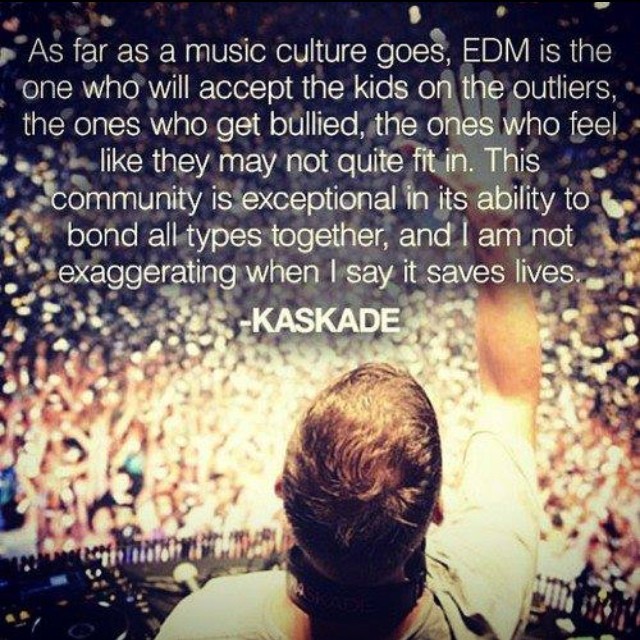