A major ambulance service has been called to The Odyssey Arena Belfast for Hardwell’s gig.

At least 60 teenagers have been treated, including 14 youths who were taken to hospital while the rest were treated on the scene.

A source at the scene tells that emergency services were called when the St John’s Ambulance were overwhelmed by the number of ill gig-goers, with more than six ambulances on the scene. The police and the media have also surrounded the area.

“Belfast, are you ready to party?” Hardwell had asked his fans on Facebook earlier today, while announcing additional tickets for the concert.

The 14 youths who are currently hospitalised, are in a stable condition.

UPDATE: The Odyssey Arena have released a statement in regards to the hospitalised and heavily intoxicated youths:

“These patrons were not granted entry to the Odyssey Arena, and were treated by the Ambulance Service outside. Seven patients have now been transferred to hospital by ambulance… The concert is continuing as normal.” 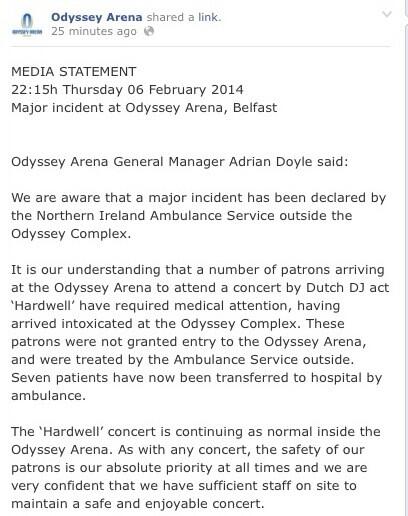 Sources still report a steady stream of ambulances from the scene. To make it clear, I have attended the Odyssey Arena several times before and know how strict they can be in regards with admissions. The youths had arrived intoxicated and the blame falls on them and whoever supplied them with the substances.

The Belfast Trust have released a phone number for anyone concerned about tonight’s events – 028 906 38131.

Incident at Odyssey has been declared as dance event continues inside the Belfast arena. Emergency vehicles on scene pic.twitter.com/KBzspRkEZ9