HARD Summer Music Festival is now unveiling some of the talent expected to perform at the 7th annual event in Los Angeles. This marks the first year the event is being held at the Whittier Narrows Recreation Area in South El Monte, as the LA State Historic Park will be undergoing construction throughout 2014. There are only a handful of artists announced on the festival’s official webpage so far, but it appears DJ Snake has made the bill! HARD Summer has featured the likes of Bassnectar, Big Gigantic, Boyz Noise, Zeds Dead and more in the past, so there’s no telling just how great this lineup could be. Will you be one of about 70,000 to invade Whittier Narrows Recreation Area on August 2nd and 3rd?

At this moment, there are five spinning question marks left on the HARD Summer homepage, each indicating another major artist set to appear. Bookmark hardsummer.com and stay up-to-date with each announcement as it happens. Tickets are already on sale too, get them here! 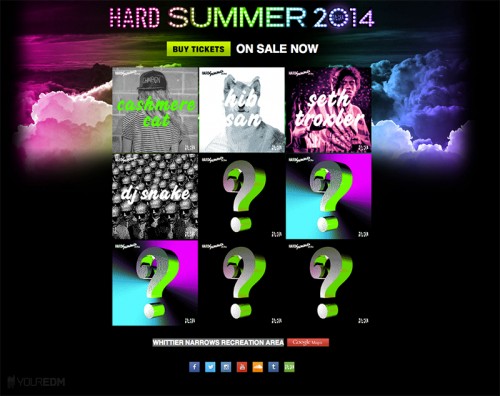