Deorro Steps Away From the Decks

On May 17 2014, DJ/producer, Deorro announced on Twitter that he is going to quit “DJing”. Erick Orrosquiesta lists a number of reasons as to why he has made this decision. He tweeted how this career path has taken time away from him family and that he doesn’t like being spoiled. Also, Deorro states that he wants to produce more music and focus on PandaFunk’s growth. Now shifting his focus away from live performances, Deorro may be able to join the ranks of musicians with labels i.e. Wall to Afrojack, Protocol to Nicky Romero, Hysteria to Bingo Players etc.

Do not worry Deorro fans, he is still due to perform all his scheduled gigs up till December. After that, he is off the main-stage grid. 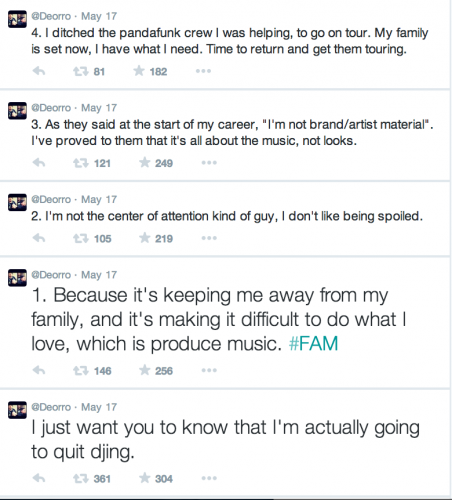 See the rest of Deorro’s tweets on his Twitter page: HERE