If you are told “no” throughout your life and are told you can’t do something, you listen, right?  Wrong.  Just ask 22-year-old Canadian, Anthony Deluca.  Deluca, a media correspondent for IX Daily, CanadaNightlife.ca, and CarpaEDM, and founder of “For the Record” on his YouTube channel (AnthonyDelucV) was strongly bullied for being obese up until the age of 17.  If you look at him now you may not ever believe this, but we all have a story to tell.  We all have a struggle to overcome, and overcoming these struggles is what brings us success.  His ability to conquer bullying and to channel the negativity he’s experienced in life into something more positive is what has caught our attention.

Deluca turned his life around once he went to university.  He joined the varsity rowing team, lost a lot of weight, and began to figure out his true identity.  He knew he had a story and was ready to let his voice be heard.  Despite the rigorous curriculum he faced preparing for law school, he was able to begin pursuing a career for his real passion: music.  He always had a heart for music – beginning with heavy metal.  His heavy metal roots began to evolve into bass-heavy EDM – finding underground acts such as Krewella before really anyone knew of them.  As he attended shows of more uplifting genres, he began to develop a liking for all styles of music.

Thus far, Deluca has attended 220+ concerts and festivals (all genres), and has conducted over 80 interviews.  Some of these interviews include Armin van Buuren, Karmin, Krewella, Nervo, and Dash Berlin and has written over 300 written pieces across five major websites and two published magazines.  I guess you could say he’s pretty well-versed in the music industry.  Not to mention, he was a finalist on a reality TV show for Entertainment Tonight Canada.  While these are all noteworthy accomplishments, Deluca wanted to create his own thing…something unique.

Due to his respect for all music, he recently started a series on his YouTube channel called “For the Record” because he wanted to set the record straight on a lot of topics that deal with the EDM genre and just pop culture in general.  “For the Record” is aimed to help people understand and find music and to give the spotlight to people who may never have it, while also congratulating those more commercially well-known.  In addition, he wants to break down stereotypes while pointing out the more beautiful aspects of the EDM community.  Through all of this, he hopes to challenge people to be open-minded and create his own positive persona and show people that they have the chance to start something different.

Eventually, Deluca hopes to take this idea of a video diary and make it into a movement – to become his generation’s voice for music.  His goal is to expand into the blogosphere.  He wants to create a lifestyle website where he shares stories that spark from his own thinking.  He wants to continue sharing great music and lay down knowledge for those who are closed-minded to EDM and pop culture.  He just wants to talk about things that we all know and understand, but none of us think to write down or think to discuss in depth.

Despite being told “no” by peers and adults, he is now able to disregard those who have said his dreams are impossible and he refuses to be defined by someone else.  His ability to persevere through difficult times has not gone unnoticed and this is why we think he is the perfect person for Aspire to Inspire.  Deluca has provided us with advice that has helped him throughout his struggles and also through his successes.

2)   “When interviewing, know the artist better than they know themselves.” ~ Host of Entertainment Tonight Canada

3)   Never settle – push for what you believe in.  Persevere beyond all doubt.

Be sure to check out Deluca’s channel and SUBSCRIBE!  We cannot emphasize how important it is to hit the subscribe button if you like the topics he discusses and want to give him even more ideas. 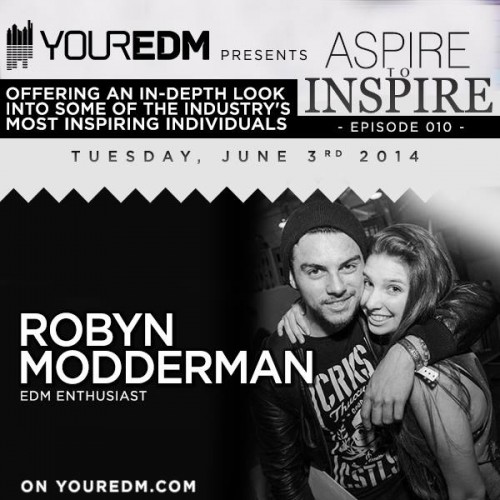 Bounce Boat Returns to NYC May 30 With Rusko!