by Your EDM Staff
in EDM News, Giveaway

Electronic dance music in Atlanta, Georgia has seen a dramatic shift of interest in the past decade like a thermometer being pulled from the freezer and sat at the footsteps of the Coca Cola headquarters on a scorching summer day. As the birthplace of trap music and hometown to several headlining artists such as Le Castle Vania, Heroes X Villains, and MUST DIE!, the city has had it’s fair impact on the global culture, although not until recently has an EDM spotlight been placed on the empire state of the South by major promoters. Due to hosting the most trafficked international airport in the world and it’s mild spring and fall climate, Atlanta has become one of the most sought after cities by promoters to accommodate the massive crowds flocking to EDM festivals. Most notably is SFX‘s gargantuan state-side import, Tomorrow World, which is arguably the biggest festival in the country. As more and more money is thrown at the city by conglomerate promoters and corporate sponsors, some are arguing that the EDM industry is getting caught up in self interest and losing touch with the essence of the community. Despite the growing competitive nature of our music scene, three men have stood up in Atlanta to independently preserve and strengthen the beating pulse of dance music so that all can experience it’s intoxicating sincerity and vitality for decades to come.

Meet Phil Ferguson, Frankie Sinn and MJ, the three partners behind Atlanta’s bi-monthly spectacle known as Kingdom Rave. Each partner comes from a different corner of the EDM arena and collectively have well over a half century of experience in promoting the scene from local club nights to large scale events that attract dancers from numerous neighboring states. MJ personally had his hand in the birth of trap music by throwing a weekly event called “Hustler” that catered to hip-hop producers and DJ’s who were exploring the new genre that fused hip-hop and dance music. Phil, who is a transplant from Seattle, has been making waves in the trance and house scene as a promoter across three decades and conceived the concept of Kingdom Rave. Frankie Sin, the youngest of the group, comes from a background in producing and rapping, although was recruited for his vociferous marketing ability. Together the men have built a name for throwing rowdy independent parties that attract crowds in the thousands to see such headliners as Darude, Seven Lions, Zed’s Dead, and Bro Safari.

The ability to dream big has become more difficult as big pockets have attempted to soley hold the reigns of dance music, although for Kingdom Rave, remaining independent has been an encouraging motivator to uphold the common standards of the EDM community. “Our battle cry right now is the independent vs. the corporate thing. We’re in a very peculiar position in the market place,” states MJ. “We don’t have to answer to advertisers or corporate sponsors, I mean these guys are doing deals with the Budweisers and MTVs and that’s great, they are getting a lot of money for it but [the sponsors] are also going to tell them what they want the show to be and we have complete creative control. We can book the people we want to book. We can put them on when we want to put them on. Our whole thing is the flow of the event, the vibe ya know? We’re not going to throw a bunch of names on a flyer to get people out. It’s like a work of art to me. Nailing a good line up is something that is very, very under appreciated and under valued in the bubble. Its gotta make sense. It’s gotta be the most amazing thing that it can be and the only way to do that outside of decor is to have the artists make sense and flow through the night in a way that it takes you on a journey from the start to the finish.”

Their creativity has been met with great admiration from the local community, who have donated their efforts to ensure Kingdom Rave’s growth. “On the same token as being purists it’s like we can do exactly what we set to do because Kingdom Rave itself comes from a core of real deep, really strong rave kids,” states Frankie. “We have volunteer bases where people can come and earn a free ticket if they work as hard as they possibly can and some of them get hired and that is how we build our team. We build it off of people that are really enthusiastic about being a part of the process, we’re not just outsourcing a bunch of people that come, make their money and leave. No matter where we go they seem to follow and they want to be apart of it because it is an experience that, in some cases, people have said has changed their life, and we don’t want to take away from that just become a bigger entity.”

The demand for their bi-monthly events has grown to exceed the supply, so the guys have evolved to expand their out-reach. “We were originally going to do a festival at Cherokee Farms but because of Tomorrow World and everyone coming to Atlanta to throw their festivals now” states MJ, “we were getting radius claused out of everyone we wanted to bring. I can’t compete with a $20M budget. Now we’re doing a two day block party/street fair where we’re closing down three of the streets in the middle of downtown Atlanta with a stage in the middle of the street and having ferris wheels and bumper cars and gravitrons and all kinds of crazy amusement rides, inflatables it’s going to be a big freaky carnival rave in the streets for two days.”

As the guys look at expanding the rave to not just large scale facilities, but outdoor events and festivals, they have made a concerned effort to restore the true meaning of the word rave, while remaining inclusive to dancers of all generations. “The word rave,” explains MJ “means “to talk about’ and that’s where raves come from. They were parties that people talked about. At the end of the day, if you’re doing an event of any kind that has dance people at it and people are talking about it, then that’s a rave.” Phil went on to divulge that “kids own the scene as much today as we did back [in the 90’s]. I remember when I got started in the rave culture back in Seattle and being taught peace, love, unity, and respect, but I can tell you one thing, we didn’t have a handshake that went with it. We just gave each other kandi and that right there shows you that the new generation of ravers is owning their scene just as much as we did back then.” 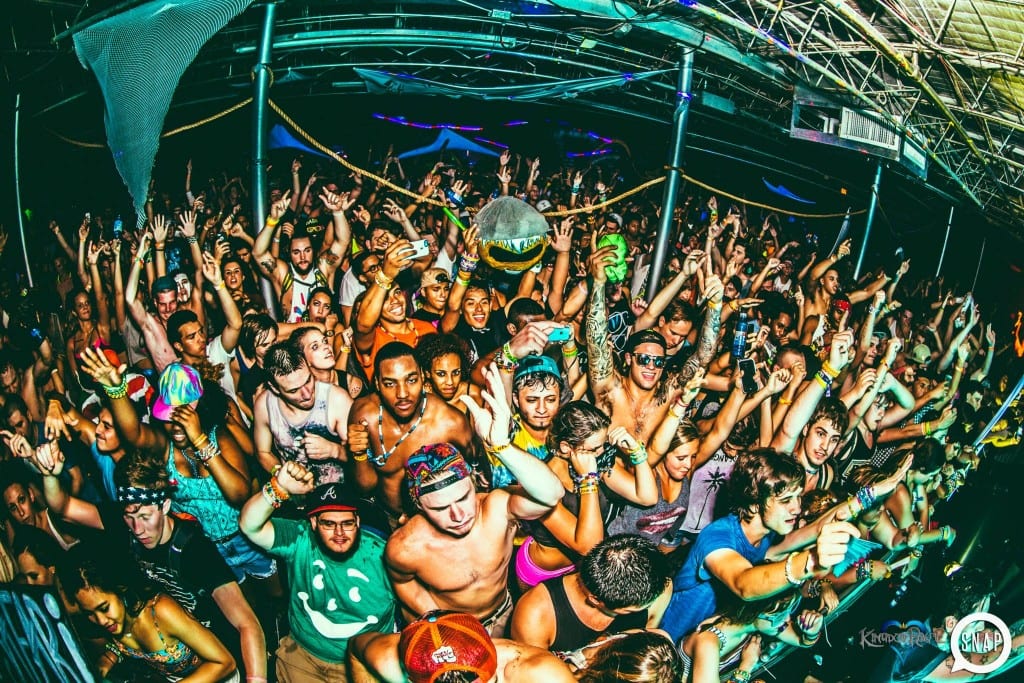 The guys made it very clear that they are in no way discouraging people from attending large scale EDM festivals. Alternatively, the service they provide as independent promoters allows people to live the intensity of such festivals the other 51 weeks of the year by attending their events. This will no longer be an offering to only residents of the South East because starting in 2015, Kingdom Rave will become an international traveling show. MJ explains that they, “are going do another concept which is a touring concept called Kingdom Come…where we basically just take the show on the road and it travels all over North America, Canada, Mexico so if you can’t get to Atlanta for a Kingdom Rave, we can bring it to you.”

While you will still have to wait a few more months before Kingdom Rave comes to a town near you, EDM fans in the South East are invited to the previously mentioned block party in downtown Atlanta called Kingdom Rave Bashment: Block Party Edition on July 18 & 19th. Your EDM has been given two general admission tickets and two VIP passes to the event and we are passing them along to you! You can enter the giveaways below, which will run for two weeks, and we hope to see you dancing in the streets to this amazing headliner lineup.

Porter Robinson’s “Lionhearted” Gets the Official Remix from Arty

Porter Robinson's "Lionhearted" Gets the Official Remix from Arty