Your EDM Exclusive Interview: The Glitch Mob & Their Creative Process

by Your EDM Staff
in Editorial, Featured, Interview

Creating an emotional journey is the main goal of The Glitch Mob. It’s so important that the group agrees it was the hardest part of making “Love Death Immortality,” which has been out since February 2014.

“I think the hardest part was getting it to sound the way we wanted it to so it could translate emotionally,” said edIT. “We’re good at figuring out the story we want to tell. But getting it to sound like the vision we had for the record; that took a very long time.

“The thing with us is that there’s no clear road map on how to write Glitch Mob music. We don’t belong to any scene or genre, so essentially we had to relearn how to be The Glitch Mob all over again and figure out what our sound was.”

Though they are a trio, it’s astounding how in sync they are with each other. It must be due to the fact that they’ve always shared similar interests, beginning with the formation of the group back in 2006.

When technology evolved and allowed DJs to switch from vinyl and CDs to laptops, it was the birth of the group, one that didn’t require a formal discussion, similar to the way they still interact with each other years later. Like all artists there’s comfort in familiarity, but if given the choice, edIT would rather play to a room full of strangers than their friends.

“A room full of friends is more comforting but I think that’s what makes it less exciting? They already know what to expect and they might not turn up that hard in front of you. Strangers are the true litmus test of how this music is going to emotionally impact people.“ 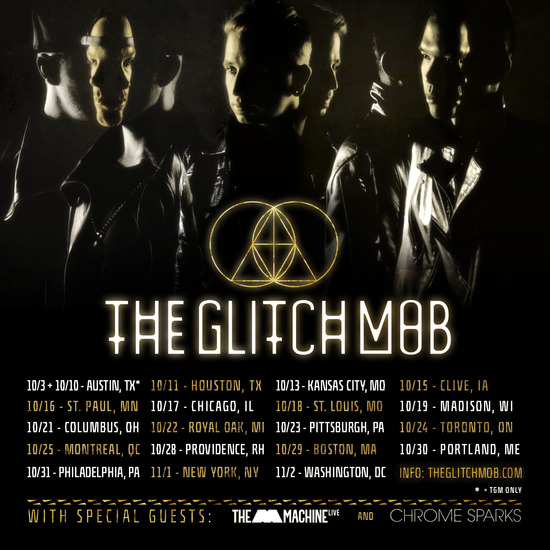 Whoever they play to, and however large the crowd, The Glitch Mob keeps a piece of advice from a close friend Daedalus, close to their heart. Boreta recounted the story:

“When asked, ‘what’s the best piece of advice you have for young people’? Daedalus said, ‘tell your own story because you’re the only one that has it.’ And that really resonated with us. We just do us and we’re not trying to emulate anything. Every person’s musical story is much more interesting when it’s unique and takes you to a new place.”

“Be yourself and don’t’ be afraid,” Ooah adds. So what’s next on the horizon for The Glitch Mob? Nothing but touring. Since the album’s release they’ve begun a 2-year world tour. Maybe once they return, they’ll have time to sit down and build a new studio?

“If we had an unlimited budget, I’d buy one of those souped up Mac Pro cylinders,” said edIT.

“I think if we had a bouncy castle so we could play keyboard, that’d be dope,” Boreta joked.

However their studio looks one day, we can all be certain that like their music, it will be unique and impossible to replicate.

Be sure to catch The Glitch Mob at one of their fall tour dates in North America! Check out the graphic above for more details.