Bassnectar: “I Have No Interest in EDM”

by Your EDM Staff
in Bass Music, Dubstep, Dubstep, Editorial

Tomorrow, bassheads from across the country will congregate in New York for what is slated to be Bassnectar‘s biggest show ever. Bass Center VII marks the first time the King of the Sound has ever played Madison Square Garden, and opening sets from Paper Diamond, Big Gigantic and Rusko further solidify the ceremony ahead. This will certainly make up for the Mudson Project disaster.

Billboard recently interviewed the master on Saturday’s madness, his take on ‘EDM’ culture, and what it takes to perfect all the noise and beauty bursting in his performances.

Bassnectar is no stranger to larger venues, having just returned from TomorrowWorld, but it can’t be denied that Madison Square Garden is a big deal. “I feel just as at home in the random hole-in-the-wall venues, and sometimes more at home in those places, so in a way, it’s like any other show,” he says, modestly. “The night before [Bass Center VII] we’ll play an old armory in Rochester and a couple nights later we’ll be in a 2,000 capacity joint in Maine. But I’d be lying if I said I wasn’t excited. I haven’t played a proper New York City show in a long time, and to have this big moment is awesome.” He also announced that the fabled ‘spaceship stage’ from the Red Rocks performance will be rebuilt for the occasion. 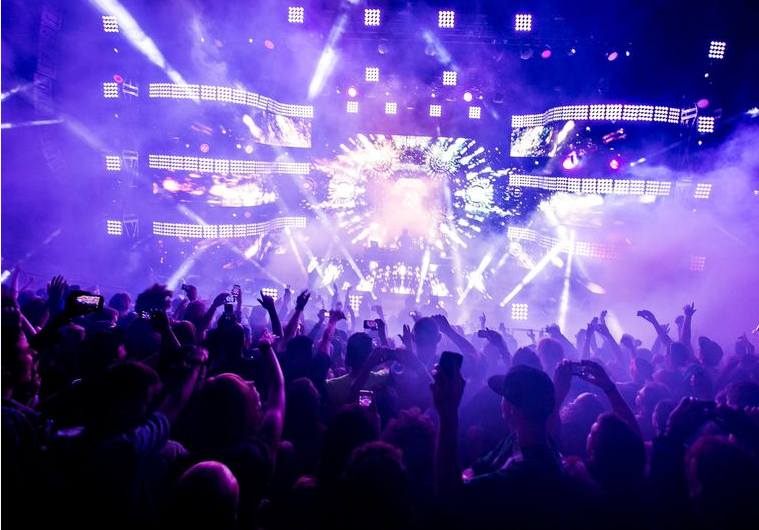 The spaceship is back!

When asked if he considered himself this generation’s Grateful Dead (a theme I even proposed in an earlier article), Lorin skillfully dodged the question by revealing his love for all kinds of music… except the kind he is all too often misattributed to. “I have no interest in EDM,” he declares. “Bands like Nine Inch Nails, Rage Against the Machine, Tool, Coldplay, they get to do what they want because their fans aren’t saying, ‘I’m a rock ‘n’ roll fan.’ No, they say, ‘I’m a Tool fan.’ It’s about the band, not an umbrella genre, and that’s the vibe I get from my fans.” This virtue is best condensed into the phrase ‘omnitempo maximalism’ – a sentiment and production guideline Bassnectar swears by.

“[My fans] appreciate eclectic music, which kind of feels like the opposite of the EDM thing, you know?”

He continued to sound off on mainstream EDM, adding how he is “very disenchanted by a lot of the larger pop and mainstream stuff.”

“It just doesn’t grab me, pretty much at all,” says Bassnectar. “Noise Vs. Beauty was just me making sounds I liked and not caring what tempo they were or whether they’d fit into other DJs sets. That’s the future for me. I don’t know what’s going to happen to the mainstream douches up in f—in’ Vegas.”

The Noise vs. Beauty concept is not just a great canvas for an album, but for whole sets as well. There is no feeling more euphoric than easing into a lush segue of ambience after a heart-rattling segment, and few maintain this balance better. “It’s the point between the peaks and the valleys. And actually, sometimes, it is the valleys,” he explains. “This is what I mean when I say I’m more like a band and less like a DJ. I’m not just playing beats to make people dance. It can’t all be peak. Sometimes, the best moments are when film scores from Inception or American Beauty play as softly as possible before unfolding into something unexpected. It’s not about, ‘where’s the drop, where’s the drop.’ It’s a musical experience.”

But adhering to the balance does not imply a more civilized sound. Lorin left us with one final pearl before signing off:

Tickets for Bass Center VII are still available! Tomorrow night, come see Bassnectar ascend to new heights in the most supreme of venues.