This fall, America got a little taste from down under as Will Sparks, Joel Fletcher, & Timmy Trumpet played around the country on their Bounce Bus Tour. This was the first time these 3 Aussies exclusively toured together, and while the journey was both rewarding and exhausting for them, they certainly did not disappoint in making waves in live Melbourne bounce. On a brisk Autumn afternoon in the northeast, we dragged Will and Timmy out of their warm hotel into the windy streets of Philadelphia to talk about what it’s been like touring, which bounce artists to keep our eyes on, if the ‘bounce finger’ is fact or fiction, what their parents think of their demanding and crazy lifestyles, and more!

What’s your favorite genre aside from Melbourne bounce?

Do you see yourselves diving into any other genres?

Will: I already have. I’ve got progressive tracks, psy trance, minimal…a few.

But you just keep coming back to bounce?

Will: Well as Will Sparks I do, but for the rest I guess I’d release them under that name too. Whatever, I love getting versatile with it. Music is music.

Timmy: I try not to think of music as genres. We tend to categorize it, but it’s all the same thing – just these vibrations that go into your ear and I like it all! Deep house and jazz, there’s influences in everything. Like if you listen to Will’s music, you might categorize it as bounce but it’s quite musical. It’s got these progressive chords in it -the track we wrote this morning has these great augmented church chords in it and it’s always changing. So it’s hard to separate everything by labeling it all.

You wrote a track this morning? Would you be willing to test it out tonight?

Will: No, no, it takes a lot for a track to be playable. 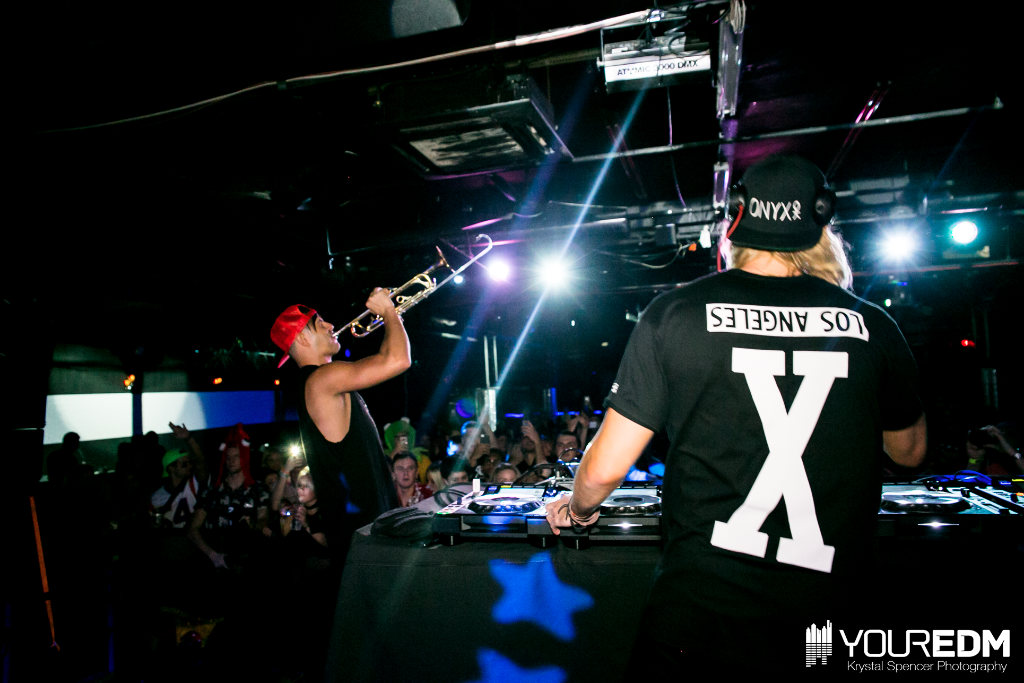 Who are some up and coming DJs that are going to make waves in bounce?

Will: Well aside from us idiots, there’s this kid from Israel named Danny David. He’s 16. I just did a track with him and he’s really, really good. Just incredible. Who else? There’s Matt Watkins, Slice N Dice, JTrick. They’re not necessarily up and comers since they’ve already made their mark but just look out for the Aussie boys, they’re all around and thriving.

Will: There’s so many to name I can’t even think of everyone, but yeah, it’s all down under. Apart from Israel, where Danny’s from.

What do your parents think of your lifestyle?

Will: They’re just so proud, mum’s almost too proud! She’s pretty much my number 1 fan. They think we’re really tired all the time, which is true. We tell them everything. I’m really run down at the moment, it’s the end of the tour, but at the end of the day my mum always said, “If it makes you happy, if you love it, then do it.”

Timmy: It’s probably not the healthiest lifestyle and I miss them. We miss our families; it’s not easy being on the road but they’re proud. We squeezed 40+ shows in 50 days.

Will: Should I show them my eyes? I’ve got this eye infection from …I don’t know… but they don’t look good. I think I’ve got the flu. That’s what 40 shows in 50 days will do to you.

What else do you miss about home when you’re touring?

Timmy: Everything. You get your routine going; you miss your friends and family, food, clothing. You know where everything is in your own town. Even my bed! I forgot what my bed feels like.

Will: It’s been two years for me and I’m taking a month off soon to get my nose fixed. I have so much shit wrong with me and I’ve never had time to fix them so a month off will help but probably won’t be enough. But yeah, we miss everything. There’s nothing like home, like staying in one place for an extended period of time.

Timmy: Having said that, traveling is amazing too. It’s a great experience. I had my first Philly cheesesteak today at Jim’s on South Street and it was amazing. I met Jim, too! I said, “Thanks Jim!”

Will: There was this old guy in the kitchen that he just said hi to. I don’t think he was actually named Jim.

Timmy: It was amazing! That Jimmy’s a good bloke!

Timmy, would you ever consider incorporating an entire live band into your sets?

Timmy: I think playing the trumpet and Djing is probably enough right now. You know Will’s really an amazing guitarist and we were thinking of doing a live performance and Joel’s a drummer, but that’s all I’m going to say! 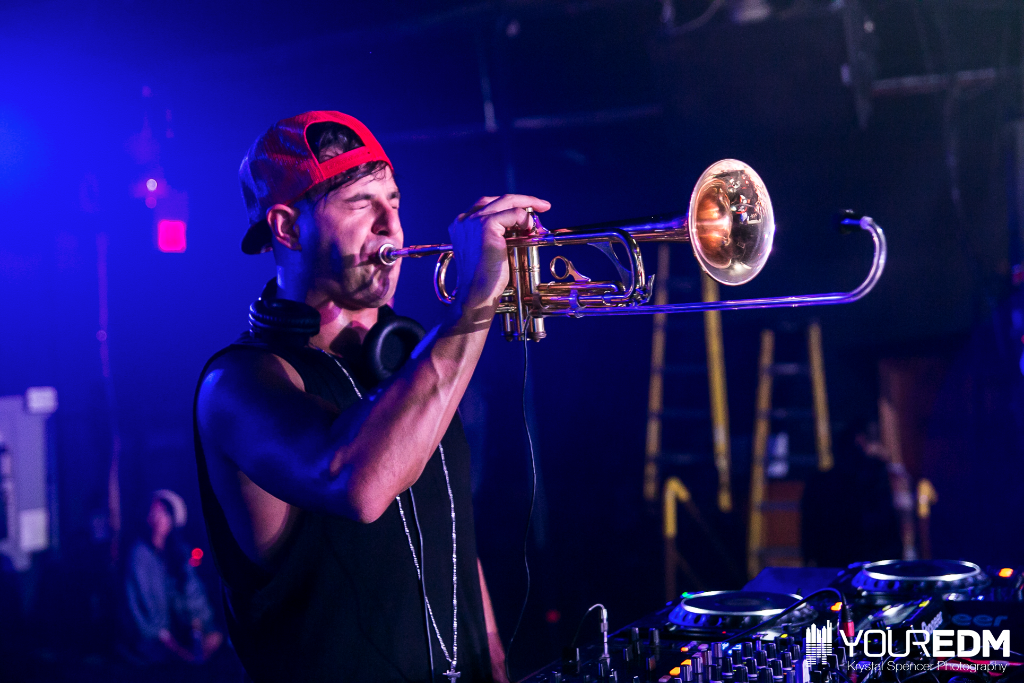 This is the first time the three of you have exclusively toured together. What’s the journey of the “Bounce Bus” been like?

Will : Amazing. It’s been such a great experience being on the road. At first it was tough but these guys are my best friends. It’s definitely been a good support. Timmy’s changed my life mentally and physically.

Timmy: But that last part was in a negative way (laughs). He USED to eat healthy and he used to train and now he doesn’t.

Will: I’ve actually got him in the gym now!

Timmy: We help each other out. It’s reciprocal, we learn from each other. You are a product of everything around you and touring with Will and Joel, they’re both younger than me, and they’re so inspirational and so talented and you learn so much from each other. I couldn’t have gotten through the tour without them. We’re more than friends, we’re family.

Okay, but who was the worst bus mate?

Timmy: Can we say Joel because he’s not here? (laughs). Joel eats Taco Bell for breakfast, lunch, and dinner.

Will: Joel’s in his own world, he just doesn’t give a shit. But I love that about him. He’s very in touch with nature. He loves sunsets…I don’t know, he’s weird but Joel’s the best. I don’t honestly think there’s any bad person on the bus. We all love each other and you know, I haven’t gotten sick of anyone, and that usually happens when you spend that much time with someone. 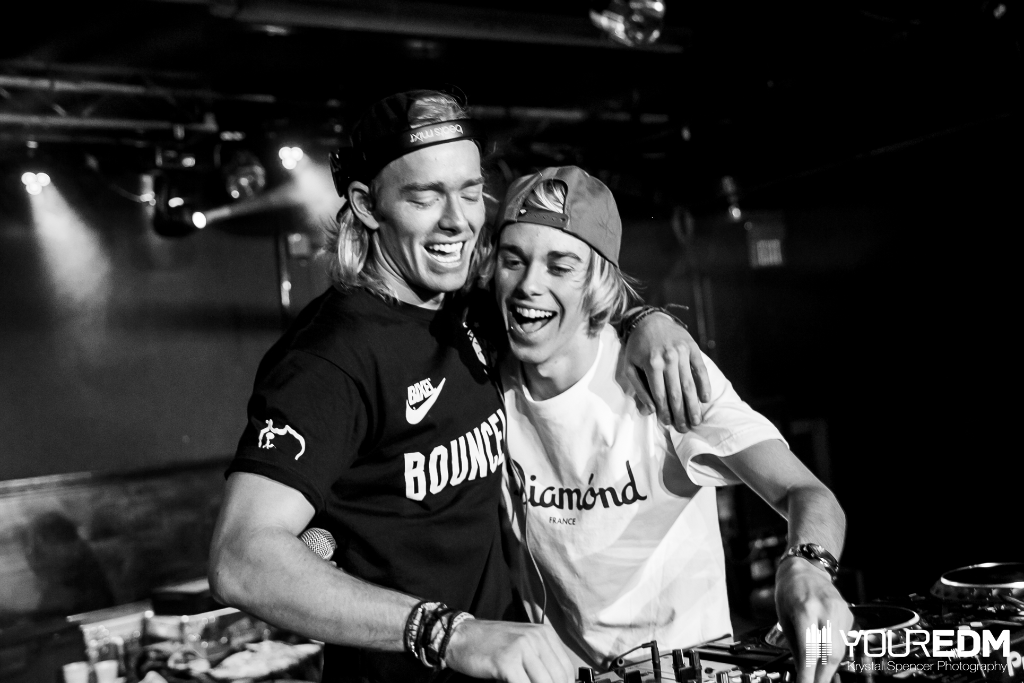 What city on the tour surprised you the most, and which one has been your favorite?

Will: I’ve been to these cities heaps of times, but one that surprised me the most was Park City, Utah. First time I went there I was blown away. Vegas is no surprise.

Timmy: The most beautiful was Park City. It’s just so incredible with the mountains. We woke up one morning and it was snowing! We don’t get that in Australia so it was a huge culture shock.

Will: The most creative place is Philly. So stylish.

Timmy: We were just saying that earlier! Greatest city in America! New York was great with Pacha too. Even Texas was fun, great people there.

Will: There are too many cities in the US, man.

Timmy: And we also stopped in all these cities because we were on the bus, like Buffalo. We also stayed in Venice, CA for a few days before LA.

Will: Niagara Falls was great. Canada was amazing as well. And LA is our little stomping ground so we always try to take 2-3 days off.

So basically every city in America was great.

Speaking of Pacha, Will, you told everyone to put their bounce fingers up there? Is that a new dance craze you’re trying to start?

Will: I love that you brought that up! You’re the first person to ask! I did this video ages ago for “When the Lights Go Out, ” and I was making it in my hotel, and I just did this little finger wiggle thing to it and it went viral. So now I just do the finger wiggle in all my shows.

Timmy, show us your bounce finger.

Timmy: Mine? I don’t know…I play trumpet and DJ, Will is the dancer and the energy he gives on stage I’ve never seen before. It’s a true performance. 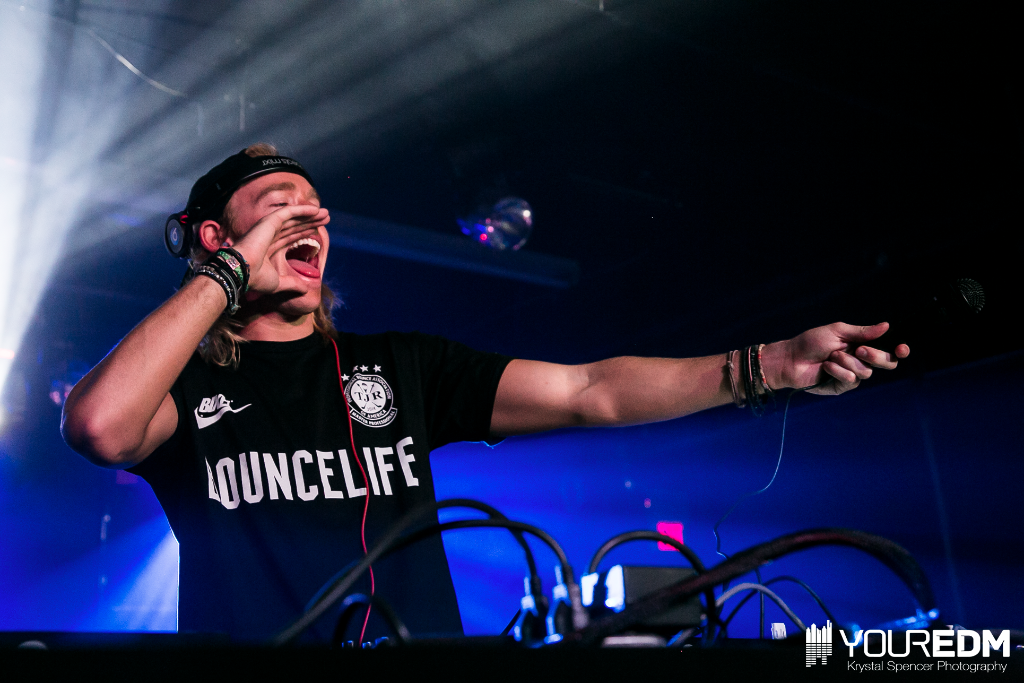 Do people ever notice you while you’re doing normal, everyday things like food shopping?

Both: Yeah, in Australia.

Will: Weirdest place someone stopped me was in the middle of nowhere in Budapest. I had these two girls almost maul me in a shopping center once. That was kinda cool, I guess?

Timmy: Yeah back home Will is this superstar. I’ve had these instances where I was chatting to a cab driver and you have a great conversation, and you leave and they go, “See ya, Timmy!” Like I’m shocked that they knew who I was the whole time!

Will: Wait you’re right that IS the weirdest thing that’s happened to me. I called room service in America and the guy goes, “Wow, you have the same name as that DJ guy.” And I tell him, “Ah well funny you say that, because that’s me,” and he completely lost it!

What would your weapon of choice be in a zombie apocalypse?

Will: A fucking shotgun. Two. Actually…I’d rather hide than shoot them.

And finally, when and how did you decide that music was going to be the thing you dedicated your life to?

Will: I think it just happened because we love it in our hearts and in our brains. Damn, that was pretty beautiful. I just came up with that on the spot.

Timmy: I think you have to fall into it a bit. It’s a natural thing. You’re governed in life by five senses. Photographers, they love to look at endless images and we’re the same with sounds. Will’s always listening to something on his phone. When you’re around producers who are always playing sounds for you, it’s just what we’re attracted to, and I think that’s why we love music.

Will: It does something to our blood when we hear it.

Missed the Bounce Bus Tour? Check out our photos from the Philadelphia show below!