UPDATE 2: After speaking with the owner of Cain’s Ballroom, it seems there are some discrepancies in the story. According to the updated video (the last one below), no guns were present at the show. Cain’s security staff were equipped with tasers, however, and threatened to use them against the crowd. Furthermore, according to the owner, no fine was ever issued to Carnage for staying past his time. Because it was the last date of the tour, Carnage was given, graciously, until 12:25 to finish; he was supposed to be done at 11:45. Carnage asked that if the speakers cut out, the mic would be left on, and Cain’s obliged. Below is the video of what happened shortly after the speakers cut out.

It was only after a member of Dzeko & Torres failed to produce valid credentials that staff security began to escort him out. They were pulled by another member of the crew and a fight broke out. The last video below is what happened just as things were beginning to spiral out of control. From the videographer:

What really happened:After Carnage went over 20 minutes (claiming to pay $10k in fines) for the last concert date of the long Tour. Him and the other DJ’s went up to the crowd to take photos and sign autographs, they were behind the barricade. While I was taking photos noticed one of the DJ’s got taken away as if he was a fan but he was actually part of the tour, the security guy didn’t care (he’s the one holding the taser gun) even though the tour manager told him not to let him go. Anyhow noticed the DJ in the crowd asked him if he was alright. Well I started filming right when Carnage noticed what was going on taking him back and bringing him backstage. Which then one of the security guys flashed his gun and you see what happened in the video. 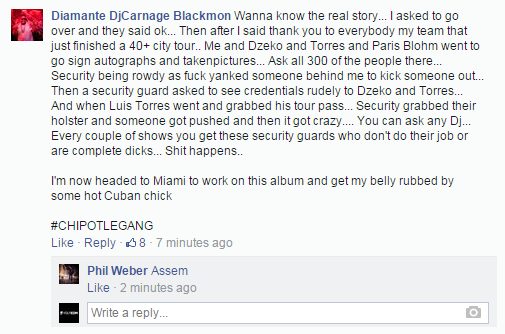 Some really nasty shit went down in Tulsa, OK last night when a Carnage show ended in a brawl between staff and crew.

According to an eye witness account, after going 20 minutes over his set time (for which he was fined for an unconfirmed amount), Carnage was involved in an altercation with staff who were reportedly being rude and obnoxious throughout the night. Again, and this is all according to the eyewitness report, Carnage himself was not involved in the scuffle, although his crew was. Several of the other performing DJs that night took to Twitter to voice their disgust and concerns.

You don't put your hands on anyone, especially when it's for the fans. #PAT2014

I think I just punched a security guard.

Guns were apparently drawn, as well, according to Dzeko & Torres. 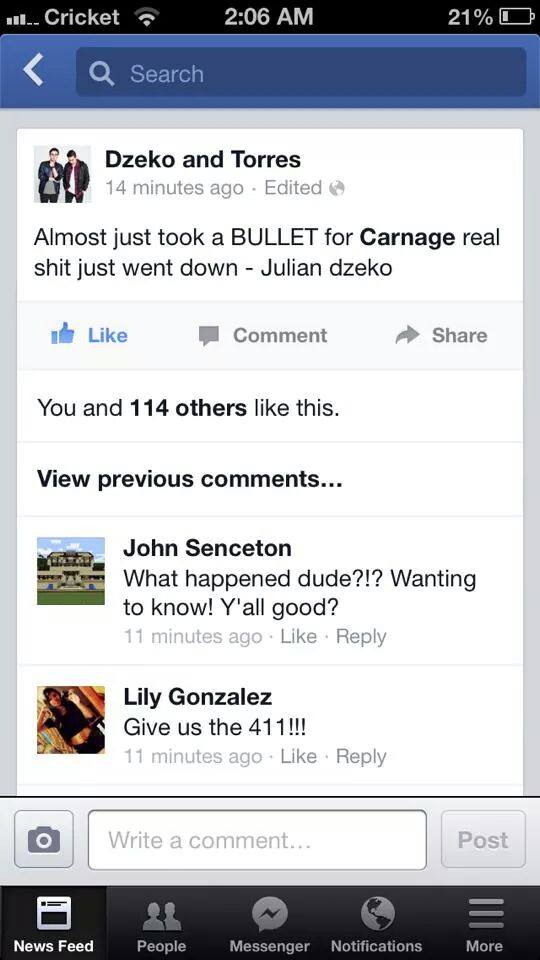 Terry Maddox managed to take a video of a part of the ordeal, as well. We heard from Carnage that the “I’m an international superstar!” remark wasn’t from him, but then who was it?