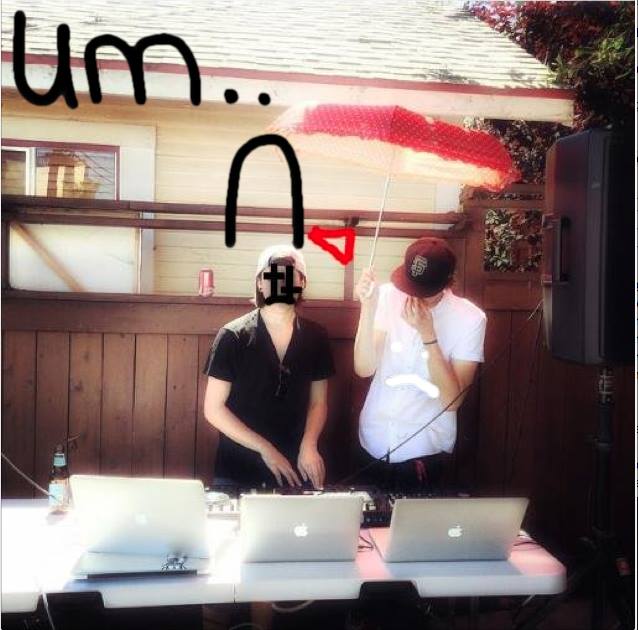 Um.. Get Weird With “I Don’t Know” [Premiere+Interview]

Two Icon Collective graduates, Dylan Gold and Ben Bruce, met while at school and started making music together in September of 2014. They call themselves Um.. Testing the grammatical chops of every writer out there who doesn’t know how to finish a sentence with their name, Um.. have been getting busy these past short four months making music as far away from the norm as possible. You can call it future, trap, bass, but any of those monikers still lacks the ability to describe the oddity of what these two produce.

“I Don’t Know” is a seriously fitting title for a track from a duo called Um.., and the audio itself is equally descriptive. With a vocal intro that sounds like Andy Samberg talking to some dude named Roger (it’s actually a Whitest Kids U Know sketch), the track fluctuates between weird homemade samples and an atypical trap bassline with some hi hats and snares thrown in for good measure. Don’t even get me started on the vocal chops, but this track has got “WEIRD” plastered all over it. And I still keep listening to it. It has this weird magnetism that makes me want to understand all the little intricate samples and obscure time signatures and even weirder motivation behind the track. Though, I did get a chance to speak to Um.. about the track and more.

Check out “I Don’t Know” below and my interview with the guys below that.

Is your logo a play on the iconic Jack Ü symbol?

Dylan: We shouldn’t jump to any hasty conclusions. I think there’s a fair chance that Jack Ü took inspiration from our logo. That would be my guess.
Ben: Who’s Skrillex?

As a relatively young duo breaking in, what challenges are you facing in getting your music heard?

Dylan: We have been fortunate enough to release our first public clip on Team Supreme Vol. 127 and “i don’t know” is our first full length release. We’ve been showing our tracks to people we know as we’ve been making them and for the most part they’ve all been encouraging.
Ben: Yeah, we’re just relying on support from our friends and fans for the time being.

Icon Collective has a huge roster of now-successful producers. Did you have any mentors or anyone that you looked up to from there that has made it big?

Dylan: I look up to so many people at Icon, but it’s been cool to see Sam (Jauz) be as successful as he has been in such a relatively short time. I’m definitely stoked for our friend Keaton (Sullivan King) to start putting out all the tracks he has shown us and after seeing him play at the Yost I’m looking forward to his next show. Another producer that I’ve only met once or twice is Dack Janiels who has been killing it in the dubstep world.
Ben: In my last semester at Icon, Preston of Penthouse Penthouse was my mentor. He’s a really awesome dude and showed me a lot of production techniques that we now use in our music.

Dylan: We are weird people. Thank you.
Ben: We have a lot of fun processing audio. Most of our inspiration comes from finding funny sounds on the internet freesound.org and making them into music. We’ve found animal sounds to be extremely useful.

How was it playing your first live show on NYE in Southern California?

Dylan: It was a fun show, the people that put it together did a great job. It was about 25 degrees all night, and it was outside, so our set was cold but I enjoyed getting to hear our music live and see random people’s reactions.
Ben: Earlier that day was actually our first time practicing DJing together. We had a couple pretty terrible transitions, but I don’t think anyone cared. It was a lot of fun.

I was just at Tequilas Cantinas & Grill next door to Icon for their Taco Tuesdays and mega margherita. It was pretty awesome. Did you have any favorite spots in the LA area while going to school there?

Dylan: We used to go there for taco tuesdays when we were still going to classes! I think the best place that I’d go around here is the Cahuenga General store.
Ben: Yeah, Cahuenga General Store is dope. They make the best sandwiches and have a very homey vibe. Also it feels like every time we go in there we see someone we know from Icon.

To be a part of a successful duo, I’m sure you’ve got to be pretty compatible. What are some things about the two of you that just don’t work together at all?

Dylan: We pretty much do everything together. We share a small apartment. I have a habit of scaring people for no reason and Ben gets scared pretty easily. I post it on Vine sometimes.
Ben: Yeah Dylan’s a little bitch.

Dylan: We just want to put out music. We have somewhere around 15 tracks that we are ready to release. This includes a 5 song EP 1 collaboration, with an artist that I’ve named above, and a couple remixes including the full length version of our Awe remix.
Ben: That’s a Nicholas Cage movie, right?