SPIN Turns the Governor’s Ball, Coachella, and Bonnaroo Overlaps into a Venn Diagram

While festival season is always something we’re looking forward to, the hype surrounding this year’s biggest events is unprecedented. Understandable, considering  the Coachella, Bonnaroo, and Governor’s Ball lineups have all been officially announced within the last two weeks. Each of these festival mainstays brought the heat with absolutely massive lineups and party-goers around the country are already planning their journeys.

And on that note, if you’re looking to attend more than one of these, plan wisely! While each lineup has a solid chunk of artists exclusive to the event, there is a significant amount of overlap between these festivals. The human brain is great at picking up on patterns and the good people at SPIN did just that, charting out a Venn diagram that clearly displays which artists will be playing all three as well as those that are playing more than one. It’s both convenient and interesting, so check it out below. 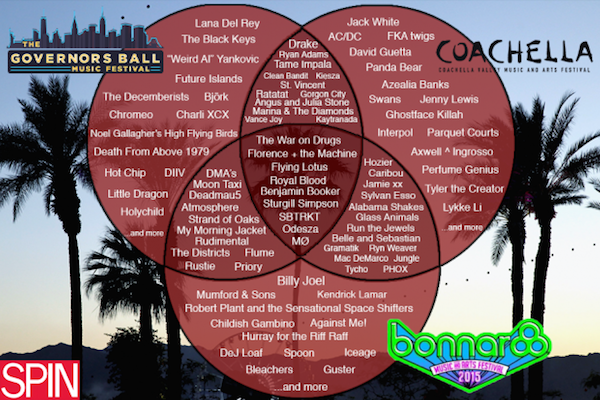 How Hardwell Ruined a Track By Adding Lyrics