Today’s live stream has a stacked lineup that inludes Kygo, Krewella, Steve Angello and a special performance by Skrillex. Although nothing has been confirmed, Your EDM has it on good authority that Justin Bieber will make a surprise appearance later on today during Skrillex’s set.

In addition to special guests, Krewella will also be unveiling their new live performance, which will now include a live drummer. With so much to be revealed today, you should just stay locked into your chair because you aren’t going to want to miss any of it.

You can check out the Ultra Music Festival Live Stream below:

You can check out the Ultra Music Festival live stream schedule below: 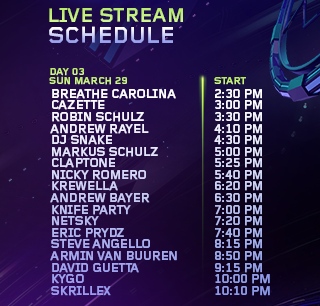