Let me preface this review by saying I live in the weed-legal state of Colorado, and Griz‘s new album is directly influenced by the magical stuff. He even has his own self-inspired cannabis strain now called “Original Griz Kush,” and it’s pretty frickin’ dank. All that aside, I am going to be listening through the 11 track album, Say It Loud, and smoking every time the song changes; and writing in the meanwhile. It will probably take three-four listens through, so I will be pretty fried by the end of this … enjoy.

First a little background on the album: Griz has been working on this for quite some time now, and many of the elements in these records were recorded from musicians live. His quaint description?

“Say It Loud is an album that took me all around the United States recording sounds from funk jam sessions to children’s choirs, trumpet solos in the forest to saxophone lines in the boiler room of my house – it is an album for everyone. This music is meant to be experienced, danced to, sang along with, felt… that’s what it’s all about.”

Grant kicks things off in spectacular fashion with “The Anthem” featuring Mike Avery. This track hits in all the right places, with a soulful top line and kid-sung chorus injecting just the right amount of soul into this future-funk hit.  Meanwhile groovy guitar rifts and bright sax solos highlight the feel-good nature of this sub-five minute anthem (literally, hah) to create a uniquely intricate contrast.

“The Anthem” combined with that blessed first high of the day has me feeling good, and first impressions matter a ton.

Up next is “Funk Party,” which is the precise soundtrack to what one might think a “funk party” is. This song carries a lot of energy and plays out better than it listens, not that that’s a bad thing. A unique addition to the album, and to his sound, “Funk Party” heavily features a (perhaps) Snails influenced growl. Now properly applied to Griz’s future-funk style, the result is simply breathtaking. While the beat is more simplistic than his other records, it favors a more familiar song structure that will have you going crazy on the dance floor.

Track three of Say It Loud is the vibe-heavy “Get Down” featuring Sunsquabi & Manic Focus. Here Griz takes his foot off the gas a bit and breaks it down for a more laid-back track with apparent reggae feels. The best part of this record, for me, are the disco grooves at 1:50. The amount of blissful emotion that the young Griz translates into his music is unreal. “Get Down” is easily one of my favorites off of the album, and definitely a “blaze it” track. Speaking of which…

The Floozies, I think that name speaks for itself. Being hailed by funk fans as “the perfect collab,” this record is straight up raw. Shredding saxophone, high energy percussion lines and powerful, gritty synths highlight this four minute instant-classic. The waning seconds of this song are really what make it stand out, though. Gorgeous, processed guitar rifts ride seamlessly alongside descending vocal samples to leave us reflecting on our very existence going into the heart of this album… okay I might be a little high.

Coming in at five, “It’s All Good” featuring Jessie Arlen. This was undoubtedly my favorite track at the album viewing party, purely because of the heavy electro influences on the drops. I’m a sucker for good electro and even more so when it’s expertly applied to another genre in it’s entirety. That being said, I’m not a huge fan of the vocals, to be completely honest. The “it’s all good baby” hook is perfect and defines the mood of this record, but the soulful, almost depressing vocals from Arlen don’t do it for me. I absolutely adore the instrumental and Griz’s use of fat plucks and see-sawing growls in this one though, so my overall impression is still a positive one.

4:20, what “A Fine Way To Die.” It’s been out for three months, but I’m not complaining as the timing is perfect. “That song you already know and love” and probably turn up the volume a few notches for, Orlando Napier brings it home on the vocals. The word suave doesn’t do his voice justice, but the accompanying Griz instrumental does. This track spends about three minutes pulling back and forth before dropping into a catchy saxophone melody and accompanying step beat. Heavy reverb and accompanying glitch along with dope track art cement a celestial feel that will have you vibing out, even if you’re in an office chair writing.

We already reviewed this next one, “For The Love,” which came out as a single just two weeks ago. I’m pretty stoned so I’m just going to quote our editor in chief, Matthew Meadow: “It’s got an old-timey sound, with a fairly clear gramaphone effect overlaid on top; add in the brass, Kweli’s voice, and the smooth and sultry bassline and this track is essentially a modern-day jazz/blues tune. The rhythm contains elements of funk that GRiZ is known for, making this track a wild amalgamation of decades of musical styles.” What he means by that is it’s fire, flame, fuego. It’s easily one of the best on Say It Loud and brilliantly incorporates the tasteful hip/hop vocals of the featured Talib Kweli into a quintessential future-funk production.

Next up is the two month old “Stop Trippin'” featuring the wonderful sultry vocals of iDA HAWK. One of the catchiest records on this album, “Stop Trippin'” is a quintessential Colorado anthem if I’ve ever heard one. The downtempo beat is salaciously intertwined with one of the best sax lines to grace funk music to date and the result in this: a nearly four minute record that will grab you by the hips and force you to dance.

We’re on the home stretch at number nine. Entitled “Headspace (Time Is On Our Side),” Griz takes us on a trip with a perfect intermission: four minutes and twenty seconds (4:20 hah, blaze it) of utter bliss. This is an ode to his roots and a track that any head can get down with. I personally can’t wait to see the accompanying visuals that they have planned, and witness the atmosphere in a full venue when this record is played.

“Turnin” with another appearance from Orlando Napier continues along the down tempo path, with a flair of wake ‘n’ bake horns and a New Orleans vibe that lead perfectly into the next track. But first, let’s talk about this one some more. The vocals are simply elegant, the lyricism and Napier’s soft touch ride alongside the prettiest chords you’ve ever heard. Whether you’re spinning from the oil or taking that first morning rip, this is the track for the occasion. It’s soulful yet modern, slow yet powerful… it’s that song you cruise into the sunset to and never look back.

But, it isn’t over quite yet. Griz gifted us a bonus track called “Take It High” featuring the wonderful Ivan Neville. The vocal line is intended to promote unity among stoners, regardless of region, and is a final taste of feel-good from the Colorado-based producer before you depart the journey that is Say It Loud. One of the more vocal heavy records, this is a simple yet groovy track that is sure to have you bobbing your head and singing along all night long. The perfect finale one might say, we’re gonna take it high.

At least I am, cause that was quite fun and quite a journey. If you’re in a weed legal state I highly encourage smoking through your first listening, as it feels like Griz really did intend this to be enjoyed in accompaniment of a nice, THC-laden indica. I’m going to go munch out, but before I go I’ll leave you with this: Say It Loud plays out exceptionally well. I was fortunate enough to attend the album viewing party and the live experience was nothing short of spectacular. So, be sure to keep up with Griz on his socials, listed below, and enjoy the album! The icing on the cake is that he is giving it out for free, so grab your copy here. One love. 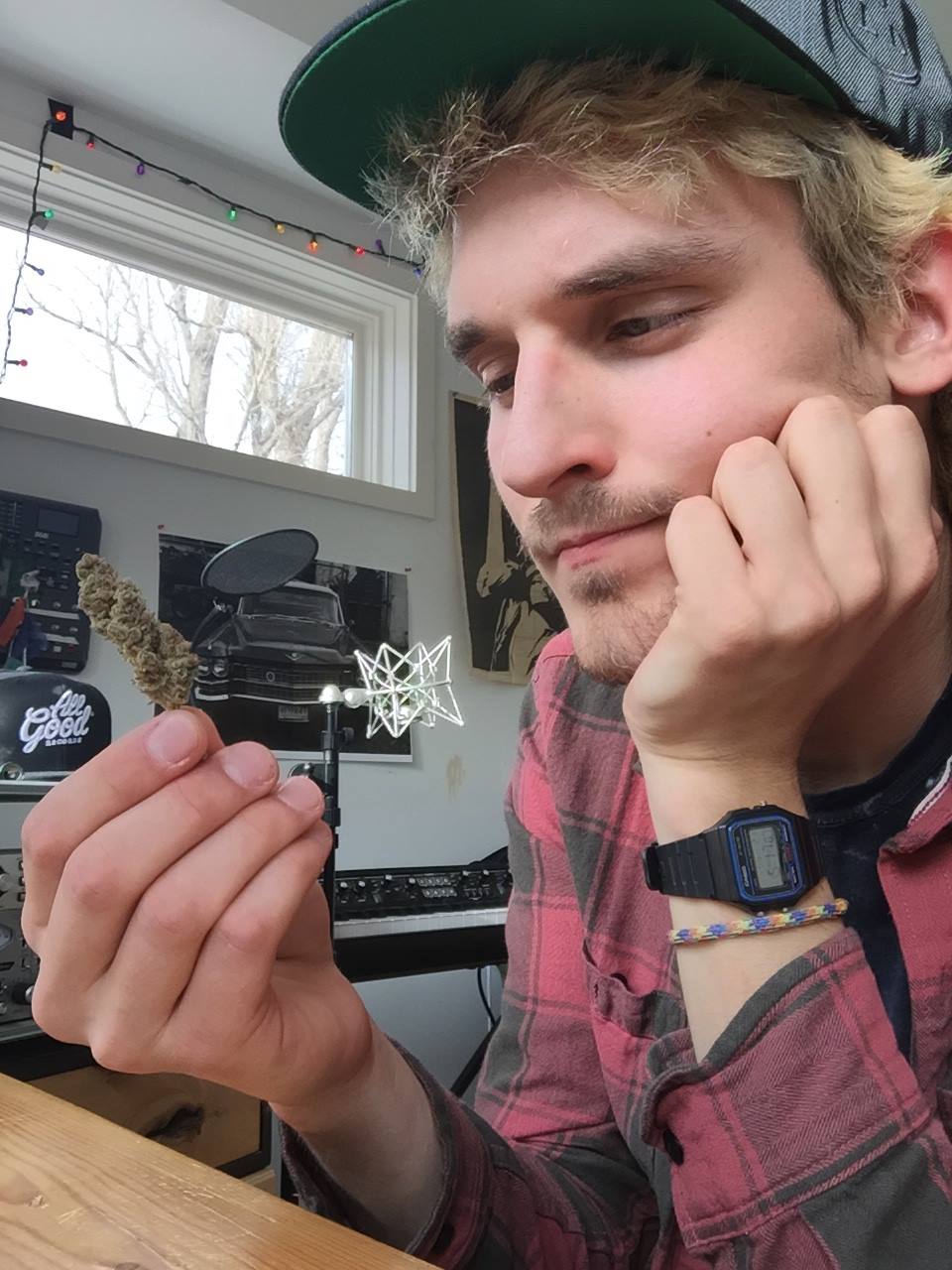 Skrillex’s Jungle Terror Collab Is Almost Upon Us

Skrillex's Jungle Terror Collab Is Almost Upon Us