DJ From Your Watch, Thanks To DJay

by Matthew Meadow
in EDM News, Tech, Worth Sharing

Have you ever faced a situation where you’re at a house party, the stereo/mixer is downstairs and you’re upstairs – perhaps mingling with a partner for the night – and you hear a shitty remix come on your playlist? It’s happened to the best of us. You don’t want to leave your partner, for fear that they’ll get bored, so what do you do?

You change the music on your Apple Watch, of course. 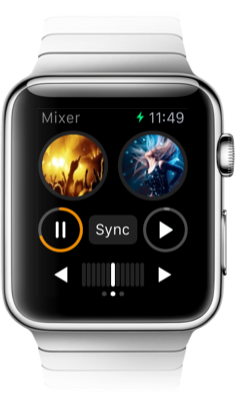 App company Algoriddim first introduced their DJay product to the iPad, proving that the device was able to function productively, and not just as a glorified Kindle. With the introduction of the Apple Watch, Algoriddim (no relation to the genre) brought that same vision to the product, helping it to become a device that can one day act productively, and not just be a cool accessory.

As of today, Algoriddim has introduced a version of DJay for the Apple Watch.

“iPhones are so powerful now that you can basically hook it up to a PA system at a club or a house party and just leave it alone,” Karim Morsy, CEO of Algoriddim, tells The Verge. “The processing is done on the phone, but the whole interaction is done purely from your wrist.”

Algoriddim is making Djay’s iPhone app free to download starting today and running for a week. Djay’s iPad app, which is also getting a small update today, will also be available for free. Essentially, there’s no reason for you to not try these out and get a feel for the applications.

It was jarring to see DJs like Gladkill mixing on iPads when the technology first became available, and it will be equally jarring to see the DJ fiddling with his watch as he takes selfies behind the stage. But technology and innovation cease for no man – we eager to see how this plays out.