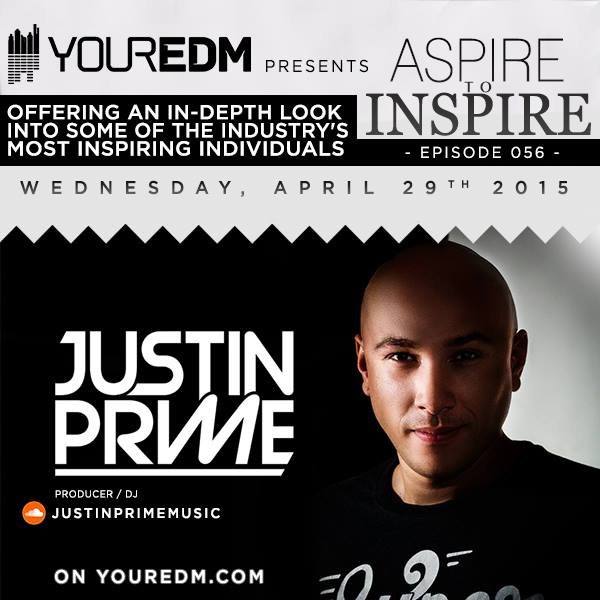 Have you ever lost a loved one? Maybe you haven’t, but you might have seen a friend experience such a tragedy. At some point in all of our lives, we will experience losing someone. As heartbreaking and scary as it is, we know that death is inevitable. If you have lost someone then you know that you never truly move on…you just learn to move forward. So how do we move forward? Well, it’s different for everyone. We all have our own way of dealing with heartbreak. Some talk about it, others keep to themselves…some of us go through different phases and cycles of both. It’s okay to cry, and it’s also okay to smile and laugh about the good times you had with that person. No matter what people tell you, there is no right or wrong way to cope. For 28-year-old progressive/electro-house artist, Justin Prime, dealing with the death of a loved one is not a foreign concept. After losing both his father and grandfather in the span of a few years, he is able to say, “You never really overcome the fact that you lose someone. You just learn to deal with it. Now I’m sort of okay again. Life has to go on, and I won’t allow these tragedies to pull me down into the gutter.”

Justin came from a very musical family and background. Growing up in the Netherlands where house music has thrived for years, it’s no wonder Justin began listening to house music, including Dutch hardcore music (which was a big thing in the 90’s) at a very early age. His strong relationship with his grandfather is evident, especially since he is the one who spent countless hours with Justin throughout his childhood and taught him how to play piano at the young age of five. He fell so in love with creating music and a decade later, at 15, he began his career as a DJ and producer after hearing the song “Here’s Johnny” by Deepack, a hardstyle DJ/producer. This is around the time when hardstyle started to become popular in the Dutch scene so he began producing this genre of music at the perfect time.

In 2011 however, his hardstyle career came to a close. At the time, he was part of a duo. While the other member of the group wanted to continue producing hardstyle, Justin wanted to switch over to EDM. He had been producing hardstyle for several years and wanted to do something different. His heart was just no longer there. He wanted to experiment with new sounds, more acoustic instruments, and different BPMs. Eventually, they decided to break up and go their separate ways. Even though it was difficult at first, Justin persevered and continued to follow his heart because when one door closes, another one opens.

Since then, he has collaborated with the likes of Tiesto, U2’s frontman Bono, and you are probably most familiar with his original collaboration “Cannonball” with Showtek, which was released in 2012 and received a platinum-plated record plus two golden records. Unfortunately, Justin’s grandfather was not alive when he received these accolades for “Cannonball.” He said, “I couldn’t really deal with the fact that he wasn’t there anymore, since he was always involved in my music. He knew every show that I played and I always showed him all of the pictures. I wanted to show my platinum and gold records to him…he would have been really proud.” Even though he was very sad about the passing of his grandfather, he was able to use this as inspiration to work even harder. After “Cannonball”, he showed no signs of slowing down as he released official remixes for Rihanna, David Guetta, Jennifer Lopez, and Flo Rida in 2013.

After touring the world for the past several years, Justin has experienced the power of music. When he is playing in front of a crowd, he is inspired by the unity of our scene. He gets to see thousands of people from different nationalities and religions coming together as one. He believes that music is the universal language. Not only does he get to see them, but he also gets to connect with these individuals from different cultures and just people from all walks of life. For instance, sometimes when he is on the road he will meet someone who is less fortunate who will ask for money or food. He will always go out of his way and give to them. He said, “Someone once taught me that it is better to give than to receive.” He has realized that he is able to earn his daily bread by doing what he loves most: making music. Therefore, when he sees the opportunity, he enjoys giving back to people who are in need. He calls himself “a people investor”. He likes helping people. One day he would like to start some sort of a charity foundation to ensure that others are provided with the essentials in life. Even though Justin has had several important people taken from his life, he still has the courage to be genuine and give to others.