Social media is a wondrous thing. Everyone knows its most basic functions: connecting with friends and family, sharing content, etc. But there are so many other fascinating uses for social media. For instance, aggregating data is made infinitely easier when everyone is so willing to share their experiences and lives online. Especially with sites like reddit, instagram and Facebook which allow for fair use of users’ data, companies with a stake in aggregation are thriving.

DrugAbuse.com for instance (a site name that already projects a negative connotation of drug use) recently released an infographic detailing the amount of times that certain drugs were mentioned in instagram posts with relevant festivals.

Note: this is not a scientific study. This study does not describe the amount of drugs taken at each festival nor how many people were taking drugs.

Unsurprisingly, psychedelics were most prevalent in posts from Burning Man: mushrooms, DMT, LSD, and mescaline were heavily correlated with posts about the festival. Also showing up in many Burning Man instagram posts was crack cocaine, a drug not commonly associated with music festivals, yet … there it is.

82.04% of instagram posts about Marley Fest contained key words relating to marijuana, not surprising. The highest stat came out of KISS’s Chili Cook-off, wherein more than 90% of posts were related to alcohol. 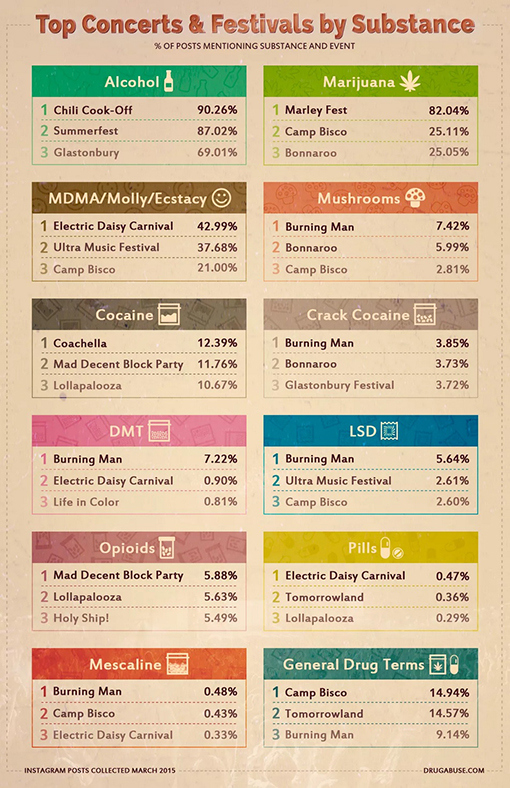 Drug use is prevalent at all music festivals and it’s foolish to try and act like it isn’t. It’s more productive to figure out ways for attendees to use safely, to make them feel like they’re in a safe environment, and to give them amnesty options if they ever feel unwell.