Lately, it seems as if the major streaming services are becoming scary, Orwellian, mega-corporations that seek to ensnare their respective user bases in one way or another. SoundCloud is beginning to reject the operational aspects that allowed it to flourish and garner respect in the first place, TIDAL is using the polished guise of celebrity involvement to draw attention away from their exorbitant prices, and even Apple has taken a hostile approach to try and corner the market with their new service. Listening to and presenting music online on our own terms is becoming more and more difficult as well, with restrictions being placed on what we can make or view. I’m not claiming that doomsday is about to strike, but the sneaky and hidden actions of such organizations are creating a wider divide between the big services and true artists/listeners on a daily basis. If I started my own business, I would naturally assume that the most important demographic to seek counsel with on my affairs would be the actual customers that are using my product. When the ideals of the people who support you, monetarily or otherwise, become an obstacle rather than an essential component to the way you structure your business, you know something is seriously wrong.

Enter Spotify, an excellent and consistent source of juicy material for us to write about as of late. Yesterday, The Verge got their hands on the infamous contract written between them and Sony Music Entertainment. The 42-page document grants Spotify the right to use Sony’s vast catalogue of music on their service, but not without paying a ludicrous price. A whopping $42.5 million were paid in advance to Spotify to use their material, alongside a Most Favored Nation clause that disallows Sony from earning less money than other labels.

The main question, though, is where all this advance money will go. According to Rich Bengloff, president of the American Association of Independent Music, it will most likely be kept by the label itself and not distributed amongst its artists.

As The Verge says, the Most Favored Nation clause along with the “annual true-up of advances” clause are the most shocking parts of the contract. 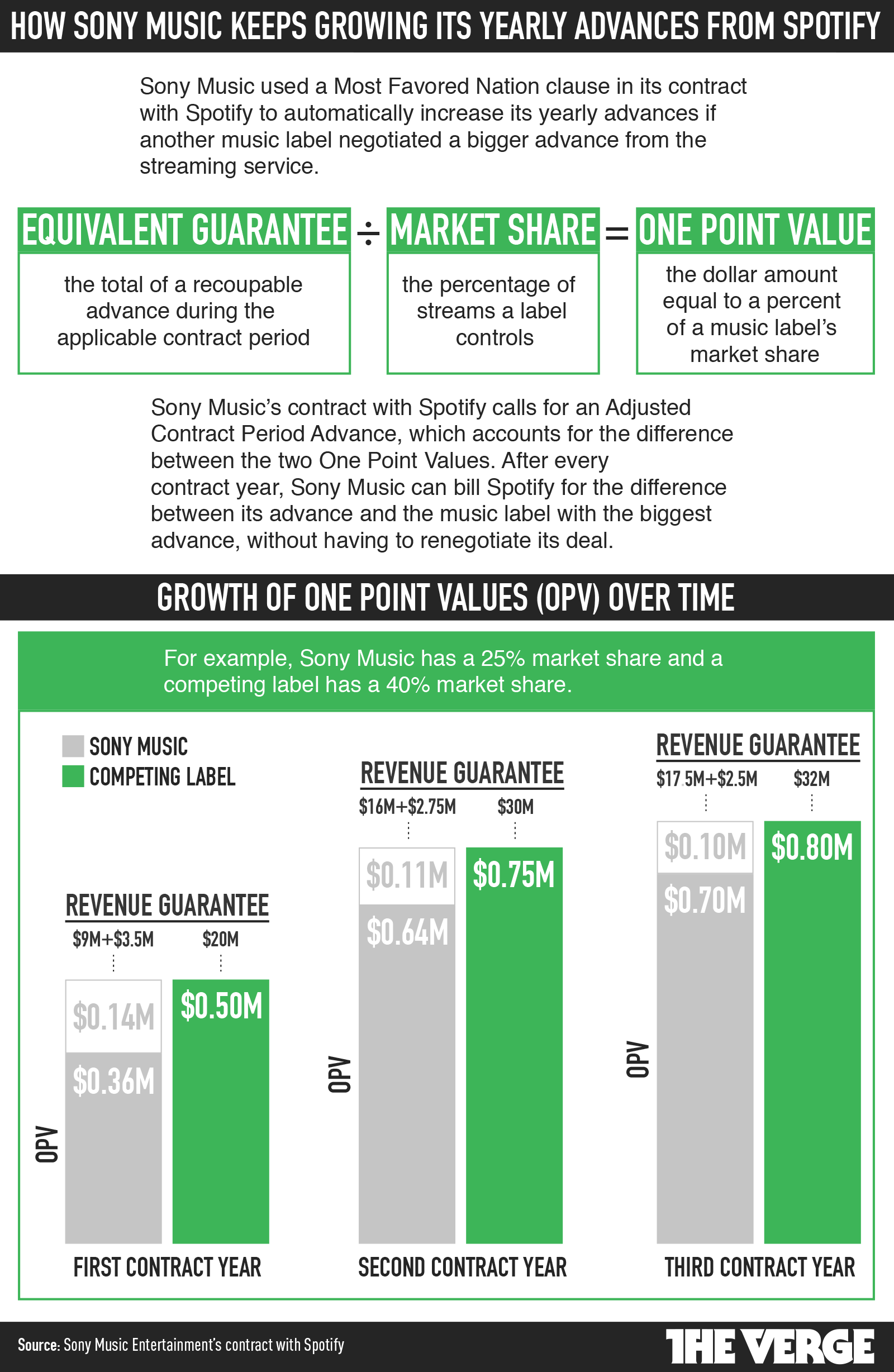 Among the other corrupt portions of the contract was an agreement by Spotify to give Sony over $9 million in ad spots on their service that could then be resold by Sony to outside buyers for a profit.

This kind of business relationship is not only harmful to Spotify’s image and profit margin, but clearly displays the despicable and money-hungry approach taken by the big labels. At the end of all this, of course, are the actual artists: the ones who make the material that gets informally tossed around like railroad bonds by the higher-ups. I can only hope Sony took Spotify out to dinner first before this contract was signed.

The Verge originally had included the document itself before the company’s copyright team forced them to remove it. They then refused to comment on the matter: the safest way to admit knowledge of your own shitty behavior without facing it. I urge you to visit The Verge’s article and try to fully comprehend what went down between these organizations. It affects not only the people in charge, but the artists and listeners themselves.