by Garrett Smith
in Editorials

While dance music has seen unprecedented growth in popularity within the last five years and has slowly crossed over into pop music with artists like Calvin Harris, electronic music has not always seen the success in the United States as it is seeing now. For most of its life, the electronic scene has been forced to reside in the underground, as more popular genres like rock and hip-hop were the jewels of the public eye, and electronic music was looked down upon. Though electronic music was given its first chance in Europe, it has a long, lengthy history stateside, beginning in the Midwest cities of Detroit and Michigan, and even now, as electronic music has become an integral part of American culture, its history remains shrouded in mystery.

Electronic music first made its way stateside in the late 1970s with disco, a genre that was frowned upon for its European connotations. In 1979 at Chicago’s Comiskey Park, radio personality, Steve Dahl, held the first-ever Disco Demolition Night, a promotional event that gave people who brought a disco record admission to a Chicago White Sox and Detroit Tigers doubleheader for 98 cents. Comiskey Park was filled with thousands of white rockers who brought disco records to show their disdain for the genre, and Dahl took the field between games to blow them up. The event eventually devolved from a promotional event into a riot, as thousands of white rockers stormed the field, and thousands more hopped the fences of Comiskey Park to join in on the demolition. This event, which took place as disco was getting more popular, effectively ended disco’s chances in America, and forced electronic music underground for another decade.

Years later, in the 1980s and early 1990s, in the cities of Detroit and Chicago, techno and house were born. In Detroit, affluent and privileged African American children searched for a way to separate themselves from their less fortunate counterparts, and as Detroit’s white youth pushed them away, these African American teenagers look abroad to Europe for inspiration, and thus, Detroit techno was created. In Chicago, the city of the Disco Demolition, house music was born out of a double exclusion, as two of America’s most notoriously segregated classes, African Americans and gays, primarily populated The Warehouse nightclub, where house music was typically played. Even as dance music moved abroad in the 1990s, where it saw its greatest growth, Detroit and Chicago laid the foundation for electronic music’s success. 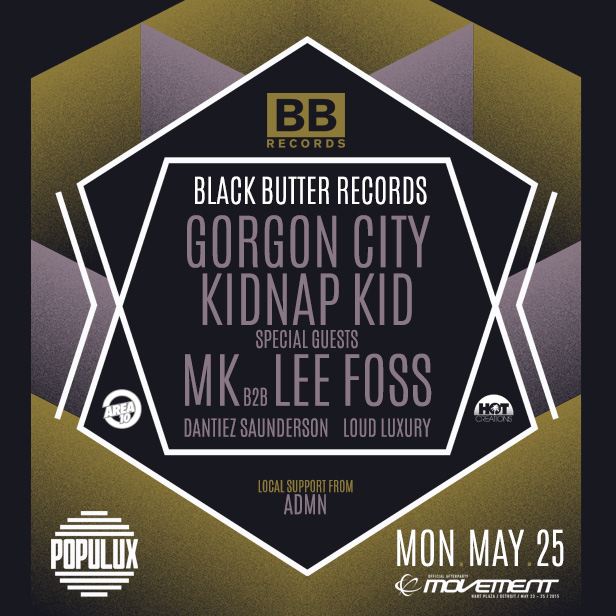 Since its inception in 2010, Black Butter Records has developed from a promotional channel for its founders’ artists to one of dance music’s premier imprints. Boasting a roster featuring Gorgon City, Rudimental, Kidnap Kid, and many more, Black Butter Records has always valued quality over quantity, and is known for its strategic signings to its roster. Though Black Butter made its debut in 2010 with the release of RackNRuin’s Soundclash EP, it wasn’t until Rudimental’s track, “Feel the Love,” featuring John Newman, in 2012 that Black Butter Records really took off. Since 2012, the UK imprint has led the resurgence of garage and house that dance music is seeing today.

Black Butter Records’ success goes hand-in-hand with the success of its artists, and you need to look no further than their crown jewel, Gorgon City, to see that. The UK-based producer duo exploded onto the scene in 2013 with their track, “Real,” as they introduced a groove-driven, sultry style of house and garage to the world.

Before coming together, Kye Gibbon and Matt Robson-Scott navigated the waters of production as two individual artists, Gibbon as Foamo and Robson-Scott as RackNRuin. While they saw marginal success as individual acts, Gorgon City offered Robson-Scott and Gibbon a platform to explore the deeper sounds of dance music that their individual careers didn’t allow, a major factor in the success of Gorgon City.

The release of their Sirens album was a resounding success, and has Gibbon and Robson-Scott to embark on a worldwide tour to show the world their sound. Their live performance features numerous live elements from both the producers, in addition to a live vocal component by vocalists like Jennifer Hudson.

As a staple of nearly every Black Butter Records showcase, Gorgon City made their way to South Beach during Miami Music Week, where they took over the Treehouse nightclub alongside labelmates Kidnap Kid, My Nu Leng, and Wayward, before premiering their live setup at Ultra Music Festival. In April, Gorgon City ventured to New York for Black Butter’s “A PARTY” showcase with Kidnap Kid. Now, Gorgon City is, once again, championing Black Butter Records, this time in Detroit, the birthplace of techno.

While Gorgon City is not slated to play at Movement Electronic Music Festival, they will be headlining the Black Butter Records showcase in Detroit, alongside Kidnap Kid, and a special b2b set by MK and Lee Foss. Gibbon and Robson-Scott are slated to play a DJ set, where they will surely cement their reputation as tastemakers, not only internationally, but also in the birthplace of techno, and a cornerstone for dance music – Detroit.

Tickets to the Black Butter Records showcase are still available, and you can get them here.