New ‘Study’ Shows Which Festivals Has Most Drug Use

Instead of taking the discreet route, the Coalition Against Drug Abuse is asking the tough questions. Their study, entitled “Which Festival to Go to If You Like To Get High,” tracked popular drugs and at which festival they were used the most. The results were fairly obvious: Cocaine is popular at Coachella, DMT at Burning Man, MDMA at EDC, and marijuana at Marley Fest. But the most interesting part of the study is how they got their information – they searched hashtags on Instagram. 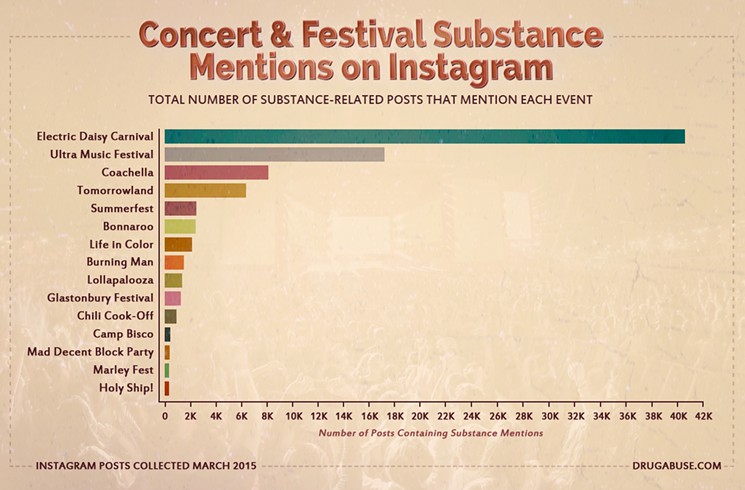 As if this half-assed “study” wasn’t horrendous enough, they openly admit this graphic (above) used to show which festivals were most popular is inaccurate. The reason why Ultra and Electric Daisy Carnival are so far off the charts is because they operate out of multiple locations, unlike Marley Fest and the Chili Cook-Off. (A Chili Cook-Off? Seriously? Who’s rolling face at a Chili Cook-Off?) If there is one thing to take away from this study – however terrible it may be – it’s the fact that the study proves that drugs aren’t just an EDM thing; they’re taken at all festivals (though most of these festivals are EDM centric, except for the Chili Cook-Off…so thanks guys!).

Missi Wooldridge from our friends over at Dance Safe hopes the study and its “findings” help begin to change the conversation to stop making drug use such a normal and accepted behavior. However she also realizes how misleading the information uncovered is.

Though there have many proper and accurate studies of drug use, the truth is that this study does nothing more than give people on their soapboxes something more to shout about. Hopefully those who are really interested in these types of studies go to more reputable sources for information.

Dirty Disco Has Become One of Arizona’s Greatest Desert Events