Alesso Forced To Cancel Performances Due to Health Concerns

Superstar Swedish DJ/producer Alesso recently took to social media to announce the cancellation of several upcoming shows. Over this weekend, he was booked to play at Ultra Music Festival Korea, but per his doctor’s request he’ll be refraining from travel for at least a week.

Although Alesso is landlocked for the next week, and will therefore be missing his performance at the Cosmopolitan in Las Vegas on Thursday, he assured his fans that he will be at EDC. In the wake of the announcement, however, many of his Korean “fans” decided to express their resentment about the cancelled shows. Alesso responded: 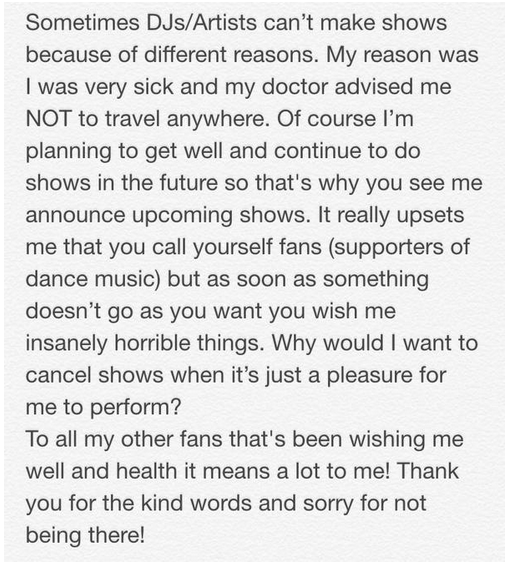 For someone that travels the world and parties as part of his occupation, it’s not entirely surprising that their health is compromised in the process. If Alesso needs a few days before heading back the States, we simply must understand and offer our best wishes. Until EDC, Alesso!