This year’s Spring Awakening Music Festival introduced me to a lot of first-time experiences. For one, I’d never been to such a huge festival in Chicago! Having grown up in southern California, partying with an entirely new crowd in the Windy City was something totally unique. The people, overall vibe, level of interaction, and general music tastes were all different than ones I’d been exposed to in the past. Throughout the entire weekend, there was an amazing feeling of togetherness that endured the harsh weather. In short: Chicago truly knows how to come together as one and throw the f*ck down. This is what my weekend at SAMF was like:

As I approached the venue in my trusty Über, the bass from the Hangar Stage began to rattle the vehicle. The glowing pink lights flashing over a small sea of hands swaying back and forth to the rhythm could be seen from the rear of the car. Any nerves I had about my first Chicago festival were instantly extinguished, as the energy I hoped to see within the crowd had been confirmed before even getting off the freeway.

The throngs of excited fans greeted me at the gates, as we cheered, chanted, sang, and yelped to the songs that could be heard from outside the stadium walls. Seven Lions was finishing his set under a cloudy sky as I entered the arena. Huge vertical pillars of screen and lights rose in a makeshift oval around the front of the stage. The booth itself stood high in the air surrounded by a pyramid of color, with endless jagged surfaces extended hundreds of feet to the sides. The balconies of the stadium encapsulated the entire floor in a ring of solitude from the outside world as the crowd began to pour in through the entrances. “Worlds Apart” left the attendees in a state of awe and affection as Seven Lions said his farewells. The weekend was officially under way.

The Phoenix Stage was my next stop, the smallest of the four excluding the Silent Disco area. Shouldering and ducking my way past the onslaught of arrivers on the west side of the venue, I finally arrived at the fences that separated the crowd inside from those entering. Mija‘s light blue hair was being flipped and thrown behind the decks alongside two exotically dressed dancers. The small area in front of the stage was packed to the brim, the fans pumping their fists and frowning with delight at the nasty trap rhythms coming from the sound system. The crowd was more than willing to stick around for DJ Sliink‘s follow-up performance, featuring Jersey Club breaks and R&B inspired vocals galore. The energy level at the Phoenix Stage was something special and personal, making me giddy to return time after time as the weekend continued. 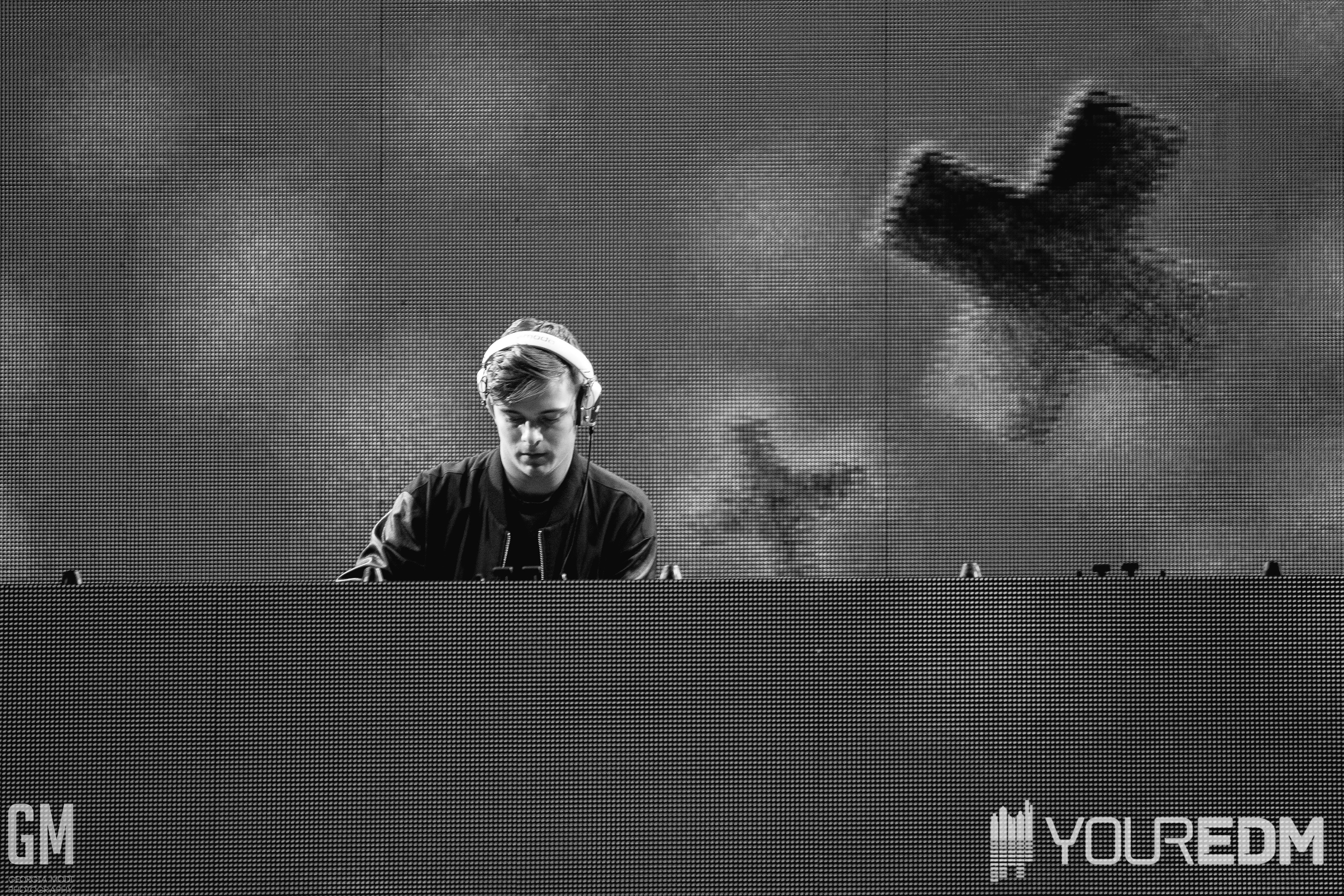 As the day quickly turned to night in the Windy City, the fans who decided to have a late start began to show up. Thomas Jack‘s euphoric melodies coming from the Equinox Stage were a welcome introduction as the entire venue became saturated with bodies. As most of us headed back inside to the stadium, the true magnitude of Spring Awakening was finally made apparent. From Borgore to Martin Garrix to Zedd, the mass ocean of attendees continued to expand into the farthest reaches of the stadium floor. As Zedd winded down, I crept up into the high box section of the arena to get a better look at the spectacle. The festival became one entity when viewed from this height, the lights and colors blending into a swaying organism all its own. From the floor to the surrounding seats to the sectioned off standing areas, all of the movement flowed in a common direction. The location for such an event could not have been better chosen.

Soldier Field left me exhausted and sore, but I was more ready than ever to wake up the following day and do it all over again.

The second day began with glowing sunshine and a light breeze coming from the nearby Lake Michigan. I scrambled up the steps to the higher sections of the stadium just in time to catch Morgan Page and Lane 8 for a quick conversation. To read the full interview with Morgan Page, click here. For Lane 8, here.

Due to the stacked list of artists on Day 2, the crowds arrived to the grounds quicker and in greater numbers. Morgan Page, Headhunterz, Adventure Club, Eats Everything, Zomboy, Bro Safari, Jack Ü, and Flosstradamus were more than enough to warrant single day pass attendees to make the trek. After my interviews, the anticipation was building steadily for the start of Skrillex and Diplo’s set at the main stage. The very first Midwest stop on Jack Ü’s infrequent tour schedule was not something I was going to miss.

Just when they emerged from the booth, flags waving high above their heads and the introduction to “Take Ü There” swelling in the background, a light drizzle began to cascade down on the crowd. As the set picked up, Skrillex throwing transitions from Kanye to Snails to reggae rhythms and back to songs from the album, it started to pour. The crowd, not one to be deterred by a little weather, embraced the torrential onslaught and fought the elements with fists raised high. Nearly every track you’d expect to hear from the infamous duo was dropped with unprecedented energy and intensity. It was a true party from beginning to end. 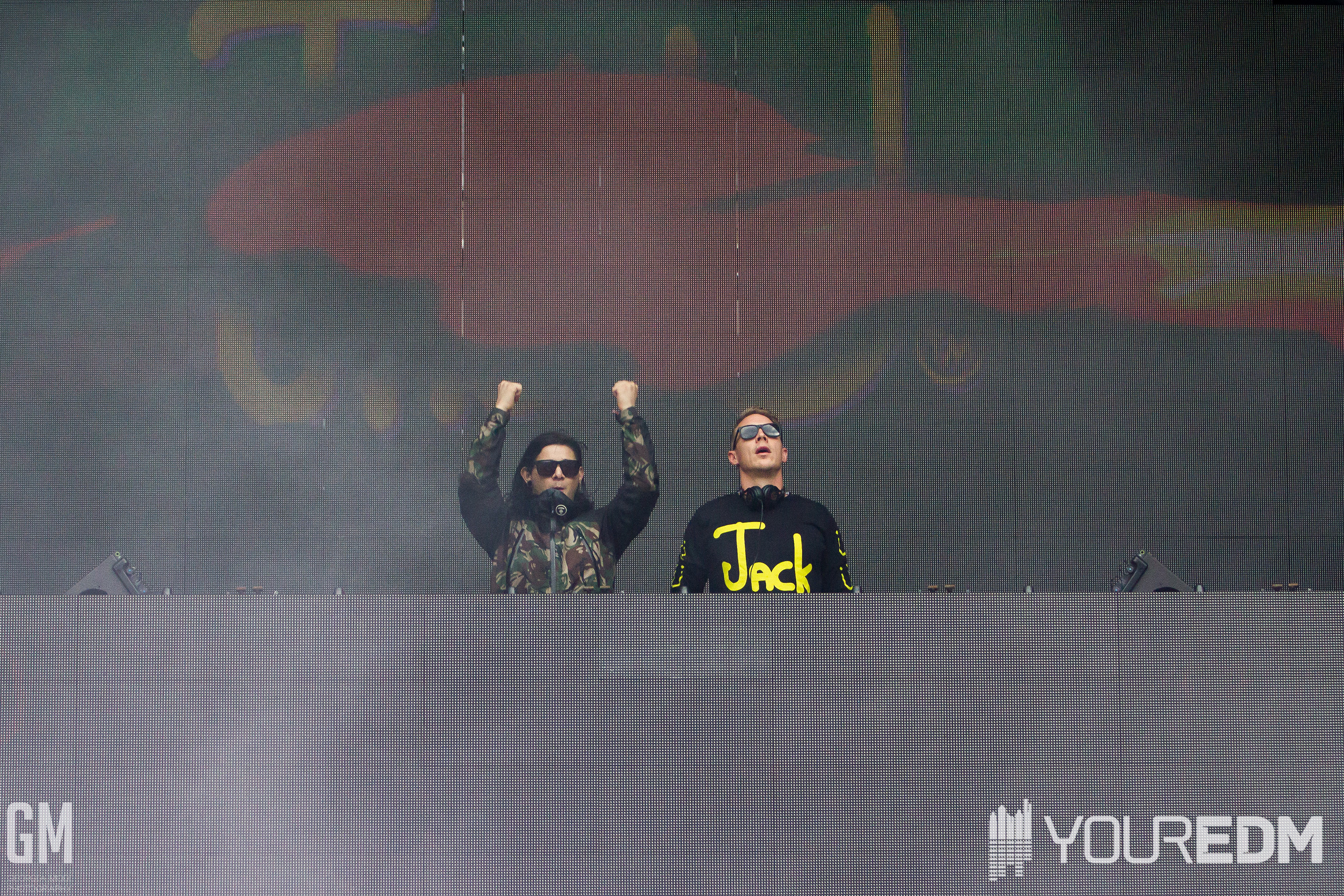 Seven o’clock was prime time at Soldier field. Sander van Doorn, Eats Everything, Adventure Club, and Brillz were all throwing down simultaneously on the four stages. The rain waited for no one, as the fields started to become muddy and soft underfoot.

The hoods of light pink rain ponchos could be seen in every direction, the festival workers raking the puddles away from the crowd as best they could. Nothing could stop the hype that surrounded the arena. As Flosstradamus emerged onto the main stage, their hometown cheering them on, they played a self-described “best set of their lives”. The strobe lights piercing through the walls of water from above combined with the ear-gouging bass and melodies was a true spectacle, one that I won’t be forgetting any time soon.

Hardwell closed down the stadium with flying colors. I decided to take a break from dancing, and sat with a cold beer in the bleachers watching the mayhem continue below me. Around me, in the chairs, groups and loners alike bobbed their heads and watched the scene unfold in unison. Even though the sound was immense and unceasing, there was a universal feeling of peace emanating from the sidelines. It was a blissful adventure of an evening that ended in happiness and soaked clothes.

As expected, Day 3 was muddy and slippery from the previous night’s rain. The stages all had massive areas of liquid puddles, and everyone’s shoes and pant cuffs were caked up to the shin with dirt. The first artist of the day was Hucci, who played an unbelievable trap set at the Phoenix Stage. Throwing down tracks from artists like Mr. Carmack, RL Grime, Misogi, and more, it felt as if I was right back in Los Angeles. There were several times during his performance where kids could be seen hopping over the fences on the side and sprinting into cover away from the security guards. Some made it, others were apprehended and dragged away.

Excision‘s show at the Equinox Stage was everything a bass head could dream for. Playing a set that rivaled even his yearly Shambhala mixes, the crowds once again embraced the mud and stomped their way into the night. W&W, Afrojack, Branchez, and more took the prime spot as the sun began to set, engulfing the venue in overlapping tracks, drawing their respective crowds to their stages from hundreds of yards away. Finally, Zeds Dead took to the main stage with an hour-long display of pure grime. 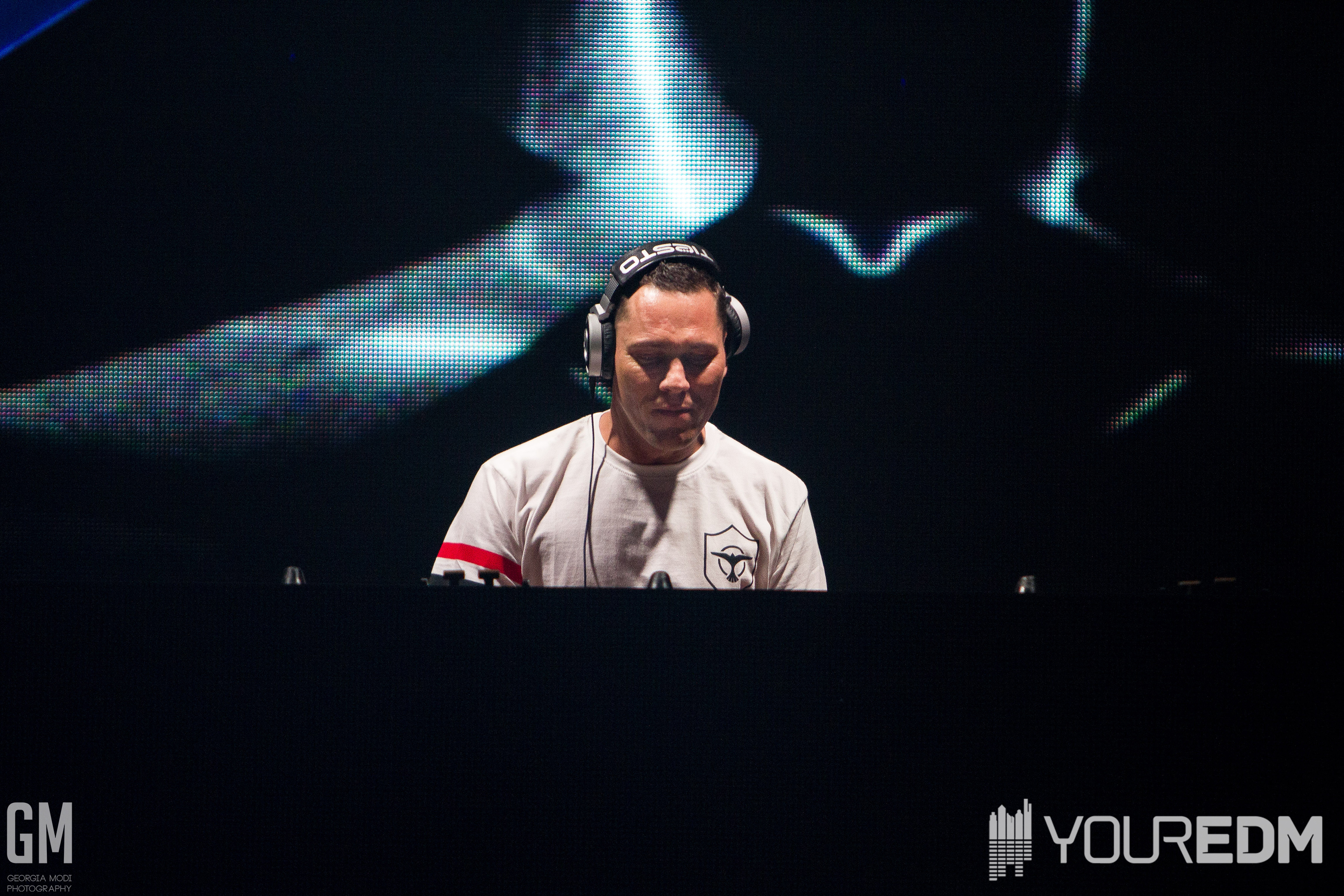 Tiësto closed out the weekend with a performance worthy of the time slot. It was a fitting end to the festivities, and a welcome close to the exhausting 3-day excursion. As the crowds finally left Solider Field for the last time, smiles could be seen for miles. The nearby streets of Chicago were filled to the brim with our people, as the cab drivers (I’m sure) had one of the busiest nights of their careers.

Before attending this year’s Spring Awakening, I had never raved in the rain, had never seen an ocean of 50,000 people inside a stadium sway as one to my favorite songs, and had never experienced the unmatched energy of a Chicago festival crowd. Needless to say, this event was one for the books, and I can’t wait to come back and try my hand again next year. 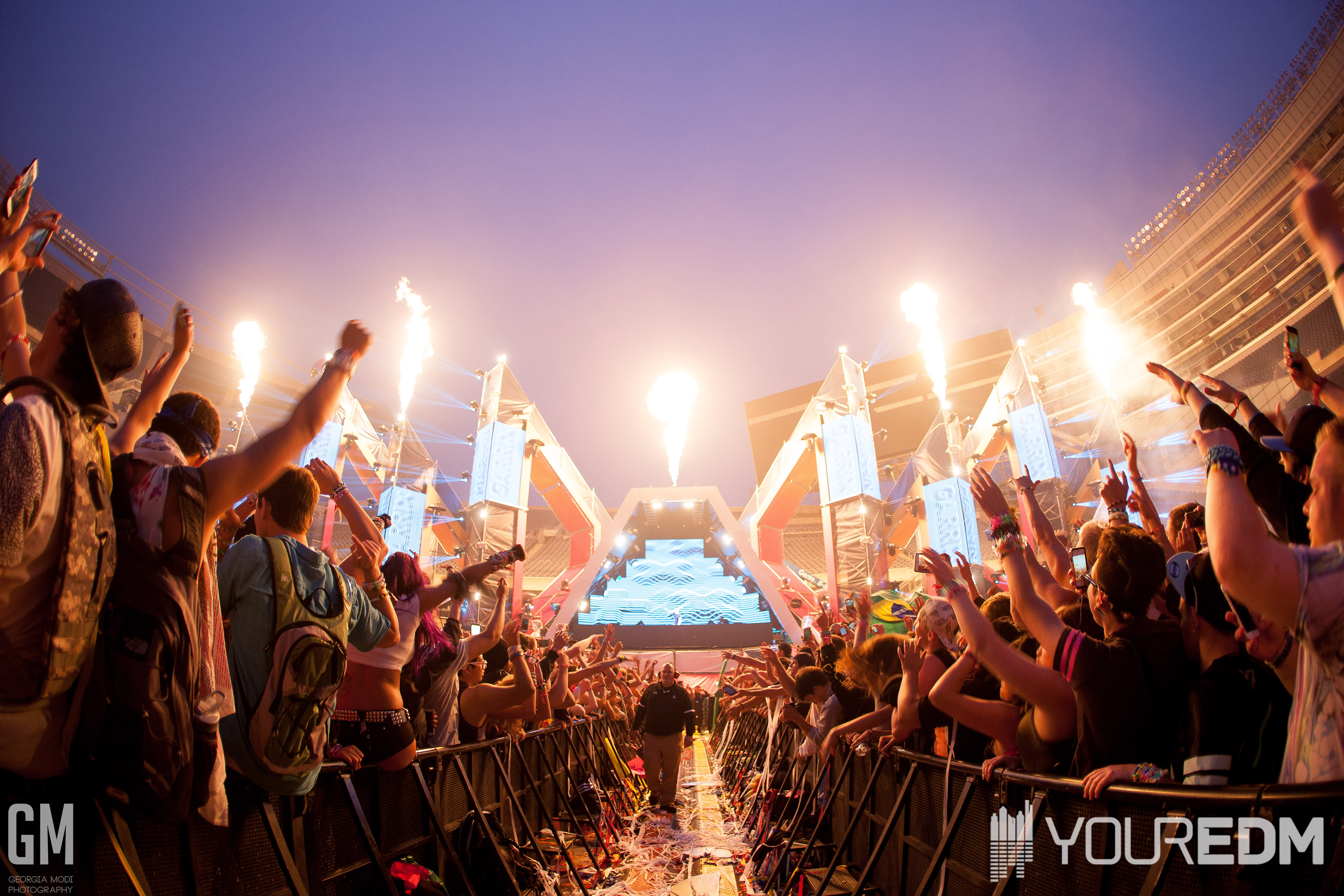 To see the full album of photos check out the gallery here!

Exclusive Mix From Louis The Child For The Festival; Mamby On The Beach