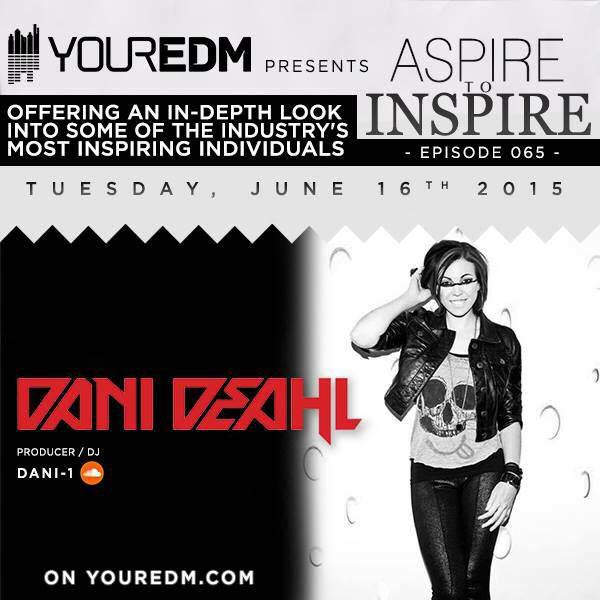 Don’t be hesitant. Don’t be afraid to ask.

If there is any piece of advice in the world that you should follow, that’s it. In this week’s episode of Aspire to Inspire, we dive into the creative mind of Dani Deahl and her journey through the dance music industry.

Dani Deahl grew up in an incredibly creative family that resided in Chicago, Illinois. Though the artistic force in the Deahl household was not necessarily driven by music from the start, there was a great deal of visual creativity. With both parents involved in television production, Deahl spent a lot of her childhood with cameras in her hands. As she grew, her interests evolved from film and artwork into a passion for writing. Writing had struck such a strong chord with her that it eventually lead to her attendance at summer writing camps held at Duke University. Deahl has continued her well-developed interest in writing since childhood as she continues to run a blog, but it was not until high school that she truly started to get involved in music.

With her high school years opening the door to her music career, there were definitely lessons to be learned along the way. Some of Dani’s earlier tracks never had the chance to surface in the industry as she admittedly shares that, at eighteen years old, she was not yet old enough to truly understand contracts and how to enforce what it was that she was signing.

But life has a funny way of bringing things back around to us. While Deahl was spending time in San Francisco, California for a gig, she came across one of her old house tracks that had been released on Halo’s label while crate digging at a local record store.

As Deahl continued to mold and sculpt her music into a sound she felt was ready to be released into the community, she had a lot of support in the city around her. Not only did Chicago allow DJs to perform professionally in clubs under the age of twenty-one, but there was also a plethora of role models at hand, such as Superjane, for her to look up to in ways that expanded beyond the music itself. Having a solid force of females around her as she grew in the industry, Dani has already made quite an impact as a role model for those who have dreams of breaking into it themselves. This carries through to a recent TEDx Talk that Dani Deahl participated in, which discussed the female presence in the dance music industry. Deahl has felt as though her connection with fans and others is built on not just her music, but her voice and what she stands for.  It is incredibly important to her that female fans see her as someone that they can approach and relate to in a time when they might be intimidated by such a male-dominated industry.

When asked specifically about any advice she might have for younger females that are hesitant to follow their dreams, she had two main points for them to remember.

“Don’t be hesitant. Fear is the hardest thing to get over. Fear of being rejected, fear of feeling like you asked a stupid question, fear of putting a song out there and having everyone hate it. But the reality of it is that there are a lot of people out there that are not afraid to take those risks, and if you don’t assume those same risks, you won’t get there.

Don’t be afraid to ask. One of the first production questions I felt comfortable asking was to a friend of mine who I viewed to be a better producer than I was… He showed me how to do it and it was so easy that I almost felt embarrassed that I couldn’t figure out how to do it on my own, but I wasn’t afraid to ask and I got the answer… You have to be willing to put yourself out there because every piece of information is a building block for you.”

That being said, Dani Deahl does not get up in the morning and look at the music industry as a treacherous battlefield that needs to be won. Aside from her position as a role model and the monthly gatherings of women in the industry for “Girl’s Night” at her house, in which onesie pajamas and board games are required, music remains the focal point.

Dani jokingly refers to her inspiration as a “love affair with drums” that got her to where she is today. Starting in the realm of tribal house and actually bringing live drummers with her on tour to perform with hand drums, her sound slowly shifted into the trap and twerk style that she currently finds herself more into. Beats with complex and hard-hitting drums have certainly become her forte, which has also influenced the crowd of talent that she likes to experience as a fan. Using the recent shows Deahl has attended as an indicator of such, you’ll find names like Lex Luger, Salva, and Ookay – who she happily noted to be one of the nicest people she has ever met, and conducts himself just as hilariously as he does via social media.

“All three of them represent people that have contributed in a pretty significant manner to the music that they are involved in and also represent something that is a bit bigger than themselves. That’s what I look for in artists. I think the reason why I follow certain artists is not just because of their music, but also what they represent in their personalities and as people.”

In terms of her hopes for the future of music, Dani Deahl has said she is very curious to see where things are going to go now that the presence of social media has somewhat changed the message of today’s music from music in the past.

“Most of the genres of music in the past were born out of people either being marginalized, discriminated against, or political issues, but the rise of social media and people being able to communicate more directly and quickly – I see less of that in music, if that makes sense.

Influential early hip-hop, political artists like Bob Dylan, and even early house music; those parties were generally filled with people that were marginalized and under-represented.
With dance music, it’s about what the music stands for as a movement and the message part of it is more subtle.”

Deahl still has all of her kandi bracelets from her days of making and trading them with other ravers and continues to stand behind the ideals of PLUR. Remembering her travels to other cities, Deahl recounts moments where she would walk by other ravers with kandi on their wrists and share a nod – knowing they were a part of the same thing. The rave community offered Dani Deahl the refuge she needed at a young age and provided her a place in which she truly felt she belonged. The same can be said for many of us in the community as well.