These days, it has become more and more rare to see an electronic producer dedicate themselves to a collection longer than four or five tracks. In dance music, the songs that breach into the charts and live sets exit them just as quickly. Unless something truly magical and unique is created that takes the community by storm, committing to a genuine album is often viewed as wasted time that could have been spent making singles to keep up with the current trends. It takes a true artist, someone confident and determined in displaying their personal musical voice, to break the mold and craft a full length work worthy of surmounting the  test of time. One such artist is Morgan Page.

Following the release of his sixth album DC To Light, and to celebrate his new residency at Light in Las Vegas, I sat down with Morgan to discuss his music-making process, influences behind his releases, and thoughts on the greater music industry. What followed was a genuine and attentive conversation from someone who cares deeply about the community that supports him, and who takes tangible steps to give back, these attributes becoming immediately apparent as we sat down. Get a closer look at the man behind the headlines below:

How have you grown and changed as an artist since the 2012 debut of In The Air in relationship to the EDM scene as a whole?

It’s a different time in dance music in a good way and bad way. I think there’s a lot of really good sounding music and a lot of really similar sounding music. And it’s a really crazy time where you’ve got the tropical house stuff getting big, you have big room kind of waning a little bit, but still popular and still effective for festivals. I wanted to write an album that had a little more club focus, but not lose that sense of song, so I kept these tracks kind of simple, you know? I didn’t go crazy with overproducing these tracks because I wanted the framework to be very simple and to present the songs in a simple way.

Did this simplicity make the work feel more personal to you?

Yeah, these are poppy-er songs than In The Air but I wanted them to have a little more aggression than the other albums, which are really mellow. I wanted to be able to play a few more of the songs live. That’s always the dilemma though, it’s very particular what works out on the dance floor and at a festival and you want to have a really strong song in there and not just bang people over the head the whole time. That’s always the balancing act of DJing and writing music.

You featured countless vocalists on this album, how did you go about choosing them?

The first thing is making sure that it’s someone accessible and excited to work on the record. Like, we reached out to Adele before and she actually got back, but she was busy having a kid haha. But the big thing is: is the voice distinct? Does it sound different? Does it have a different quality? And I think what drives me crazy, though, is I’ll hear these big, beautiful progressive house records and I can’t tell if that’s the same vocalist I heard the other day on a song I put in my mix show. There’s a lot of singers that try to sound the same rather than cultivate their own sound, so to me that’s important. So, you know, I take that unique voice and really shape it to try and make it more unique. Like I’ll exaggerate aspects of Lissie’s voice, and distort it maybe or push it to give it more grit or something.

Do these vocalists have any say in the creation of the track? What’s that process like?

It totally depends. Sometimes we’ll do a stream of consciousness session where I’ll just play chord progressions that I’ve done, and I’ve muted all the leads and I’ll just have the singer sing whatever comes to mind. Then I’ll just chop all that up, like for ten minutes, and I’ll chop it into like a three-minute track. Which is a really tedious way to do it, I wouldn’t recommend it, but that way I can create hooks from scratch. And then sometimes we have a really sparse acoustic demo where the singer is like ‘oh I’ve been working on something like this what do you think of this song?’ and then we’ll listen and go back and change it.

Now that you’ve finally put out the album, do you see yourself focusing more on the performance circuit, or will you still regularly be in the studio?

You know, I can never take a break. It would be nice, but you want to keep the momentum going. So now I’ve started a next record already. This record takes a while because you got to reserve a chunk of time for the album, like it’s been done for a little bit. I don’t know, I have no idea where the next record is going to go. Maybe its more experimental, we’ll see. But it’s going to be a different sound for sure because I don’t want to just repeat myself. But I think the important thing now is I want to do another 3D show, so we’re working on another version of that. That was so much fun but it’s just so expensive to do. So the DC to Light tour started in April. It was little more intimate, more about refocusing back to the fans, being up close and personal. Because you know the venues, only a few of them were bigger than 1000 cap, so they were smaller venues. But I think the next thing is bigger, more elaborate stage production shows, and we’ll see where the sound goes, I have no idea.

What has your residency been like at Light? How is it competing with the other big names in Las Vegas?

Well when I was at the Wynn we had 25 shows, and that was too many. But they’ll spread you out to different clubs and different properties, which is cool. So far we’ve only played a handful at Light, so I’m still getting a feel for the club. I think it’s a beautiful club, it’s great and very wide, and I’ve been to Daylight once. There’s going to be a ton of summer shows. But it’s exciting, it’s a good time for Vegas. There’s a lot of competition out there. It’s going to be very interesting to see how things shake out with all these guys competing. You’re going up against so many big artists every night and if you want a good slot you got to go up against the big guys. But I’m really curious to see what happens with that since Hakkasan . . . everything’s owned by the same company now haha. 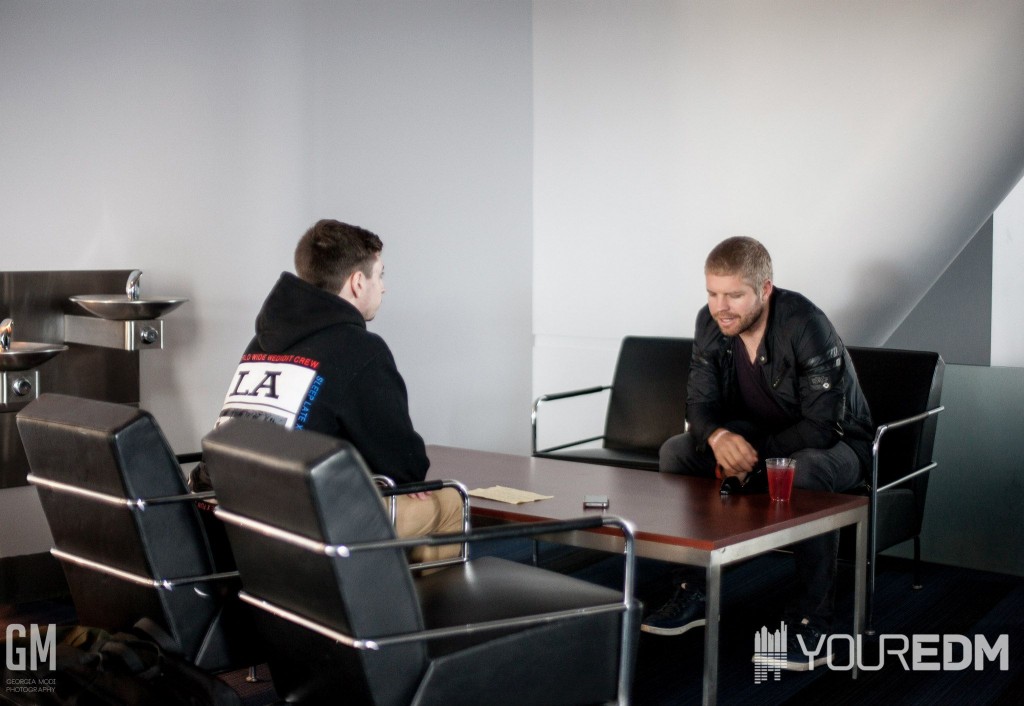 What about your goals when starting MP Quicktips? Why don’t more producers give back to their fan bases like this?

I’m wondering the same thing, haha. Well first, selfishly, I wanted to have my tips written down before I got these ideas. And then I started doing tips, and a friend said “why don’t you tweet these?” Like do quick tips daily. And the idea was to get the ideas down, create a knowledge base, and eventually figure the best ones out. Because some are better than others for sure. But I wanted a resource there, because right now it’s very easy to work in a bubble by yourself, and you can miss a lot of the basics by Googling and looking at tutorials. Those are great, but I wanted to visit some of the lost basics for myself, too. So a lot of checklists that I have for myself come up during mix down or when I’ve finished a song. You know, like, is the hook strong? Does the build up transition to the drop correctly? I have all these mental checklists and I wanted to have these quality factors in one place where I can picture them. So the blog which was recently launched, it’s a little more longform, a little more beta, a little more rich media. And there’s videos and things. So I’m really trying to make sure it’s useful information. I read so many interviews with people and they don’t have anything to say! Like, I’m not sure if it’s because they use ghost producers or something but I feel like every magazine I pick up, I grab one nugget of new information that’s worth sharing. I want better information in one place.

Do you think this resource helps strengthen your relationship with the fans?

Yeah, and I think I want the quick tips to be a series. It’s going to be a print book eventually. But I want it to be a resource that goes beyond EDM, beyond music. Just for creative types. It’s great, we’ve gotten great feedback on it. And the really surprising thing so far is how international the feedback has been. I’m looking at the stats and it’s going way more international than my music fanbase, so people who don’t know my music are coming in and finding shit. It’s exciting but it’s a lot of work. I’ve been talking about it for three or four years and it’s finally happening, so I think it could be really useful for people.

It sounds like you’ve got quite a busy schedule, how are you able to balance all of this?

I feel guilty when I’m doing tips and I’m not in the studio haha. So I try to like dedicate mondays as blog and podcast days, because music’s got to be the top priority. But like you were saying, it’s funny a lot of guys think that they’ll endanger their career by giving away tips. The point is: there aren’t secrets. Everyone has access to the information, it’s just how you apply it. Like I’m really surprised Calvin Harris – he’s a great guy and really nice – but I’m surprised he doesn’t do any interviews.

I read in an interview recently that you were having trouble with Soundcloud’s new policies within your mix show, what are your thoughts on their recent monetization efforts?

It used to be a really good platform to debut a mashup and now it’s like, where do you present that mashup? I can only really play it on my radio show but that might get flagged, too, because of Soundcloud. So I guess you could put it on Mixcloud or whatever but there’s a lack of outlets, and they’re just kinda buttoning things up because the major labels are so involved and have ownership or something. I don’t know where it’ll go, I think every platform starts off exciting and full of possibilities, and then when they have to make money off of it things change. It’s like what happened with Myspace, it’s like this arc of novelty. It starts out amazing and then when financial reality sets in it morphs into something different.

Do you think you’ll be staying loyal to the service?

It’s crazy because if I post stuff to Youtube I don’t get as many views, like my Soundcloud community is way more into it than Youtube. I feel like the Youtube community has tapered off and other outlets are way more effective. But that’s going to change, too, with Youtube launching their subscription service. I think in the next year there’s gonna be some major changes in the social media world. So yeah, I’m sticking with Soundcloud, it’s fine. If the podcast gets flagged we yell at them and they put it back up, they’ve been pretty cooperative.