Erskineville’s Imperial Hotel in Australia was put under temporary closure this week due to the bar’s staff consuming drugs while on the clock. The Office of Liquor, Gaming, and Racing executed a targeted operation Friday night, following recent media attention on the club’s increase in drug confiscations and intoxication issues. The venue came under new management two months ago, which is when these incidents became more consistent.

The police raided the hotel Saturday night and consequently charged two staff members with drug offenses, as they had seen them ingesting ecstasy before serving drinks. “Police also cited drug use by patrons, excessive noise and public disturbance and ‘failure to maintain responsible [alcohol] serving practices’ as reasons for the forced closure.”

Anthony Keon, OLGR Director, had this to say:

Despite repeated regulatory engagements, the venue has failed to implement appropriate controls to deal with illicit drug use and intoxication at the venue. A situation where bar staff and patrons are openly consuming drugs at the venue, and where there have been repeated drug and intoxication issues, is completely unacceptable and shows that the venue has been operating with a complete disregard for its obligations and responsibilities.

The Spice Cellar, a dance club and known host of LGBITQ events, was moved from its original location to the basement of the Imperial Hotel after it experienced several lockouts – transforming into a sort of “rave cave.” Now, it has helped to turn the Imperial Hotel into a vibrant meeting place for dance music enthusiasts of all types. 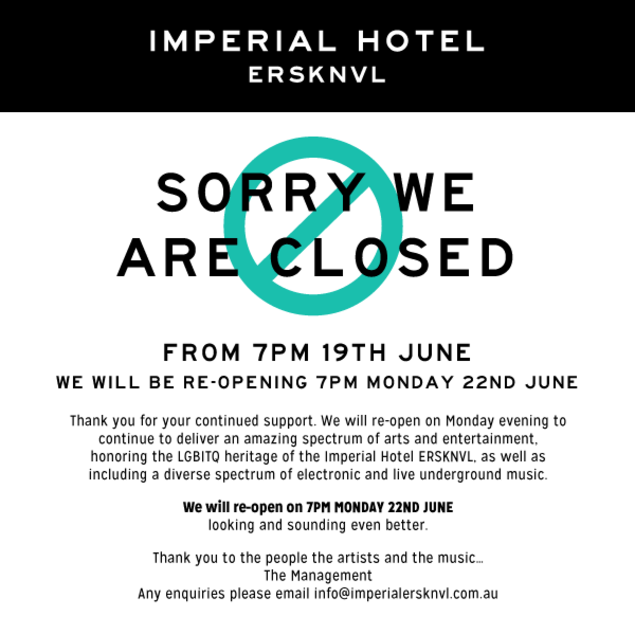 Tags: bardrugserskinevillehotel shut down for partying too hardLGBTQ
Previous Post