Electric Love Festival in Austria ended this weekend, featuring as many mainstage, underground, and up-and-coming acts as you can count on all your phalanges. But, unfortunately, it didn’t end without incident.

On Saturday evening, Austrian local time, a 23-year-old man was killed by a falling light tower that was brought down by strong winds. The tower fell on top of him and caused massive internal injuries. Paramedics at the scene attempted resuscitation but the young man was pronounced dead.

Security knew about the high winds earlier in the night, and attempted to weigh down loose fixtures with ballasts, but unfortunately mistakes still occur in real-world environments.

The festival released an official statement on Facebook yesterday: 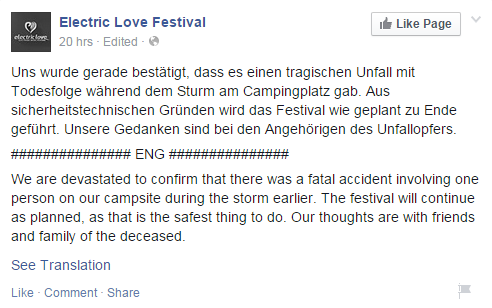 Our condolences go to the family and friends of the deceased, as well.