Fracus and Darwin Discuss the Hardcore Scene, Their Influences, and Their Passion For Music

This weekend I will be attending an awesome hardcore show in Tempe, Arizona. It has been quite some time since my last hardcore event, so I know I have to make this one count. I have the extreme pleasure of seeing Fracus and Darwin, who have been touring in the UK and the US, displaying their DJing talents and promoting their love for dance and fun. They show their fans how incredible experiences can be found and appreciated in the hard dance music scene. I wanted to talk more with them about their goals and their experiences while being so involved in the underground dance music society. This is what they had to say:

Tell us a bit about how you two started this project together.

F&D: We started doing the Fracus & Darwin thing in 2009, both in the studio and in the clubs. We both had a few years as solo artists prior to that, but we’d been working together on a few labels and projects, so it seemed like a natural progression. We work really well together in the studio and behind the decks. Our ideas and direction seem to be in sync in such a way that we always manage inspire each other creatively rather than compromise. We’re both capable of doing everything individually too, so we get to switch around who’s doing what, it’s not like we each have a separate boring role in the group that we have to stay in. It’s also more fun touring and travelling together when you’re part of a duo.

If you didn’t have musical careers, what other opportunities would you pursue?

F&D: Almost certainly we’d remain in the creative industries. Film production and so on, creative writing and so on. We’ve both done quite a lot of sound design for computer games over the years too, so I think we’d be interested in continuing that sort of thing too and maybe even doing some stuff on the development side. Everything we’ve ever wanted to be has always been something that’s really difficult to get into!

What can you tell us about the underground Hardcore scene?

F&D: Hardcore has evolved and changed it’s sound quite a lot over the years, and it’s really good to see it start to gaining momentum all over the World. It’s not a new form of Electronic music as it’s been around as long as D&B or Trance in one form or another, but  like D&B, because of the high energy and tempo of the music, it’s always been kept quite free of mainstream / major label interference. It’s been allowed to develop as it’s own underground thing in all these pockets like in the UK, the US, Japan and Australia, and as a result it’s now probably one of the most diverse and free-thinking genres out there, with production quality higher than it’s ever been. The events, whether they’re big or small, always manage to attract really energetic and good natured people too. There are always positive vibes at Hardcore events, maybe partly because the music is so uplifting and energetic, but it’s certainly a great environment to DJ in and make music for. It has always been a predominantly UK lead genre in terms of the majority of artists who make and play it, but in recent years that’s really started to change, and it’s become a far more Global scene. 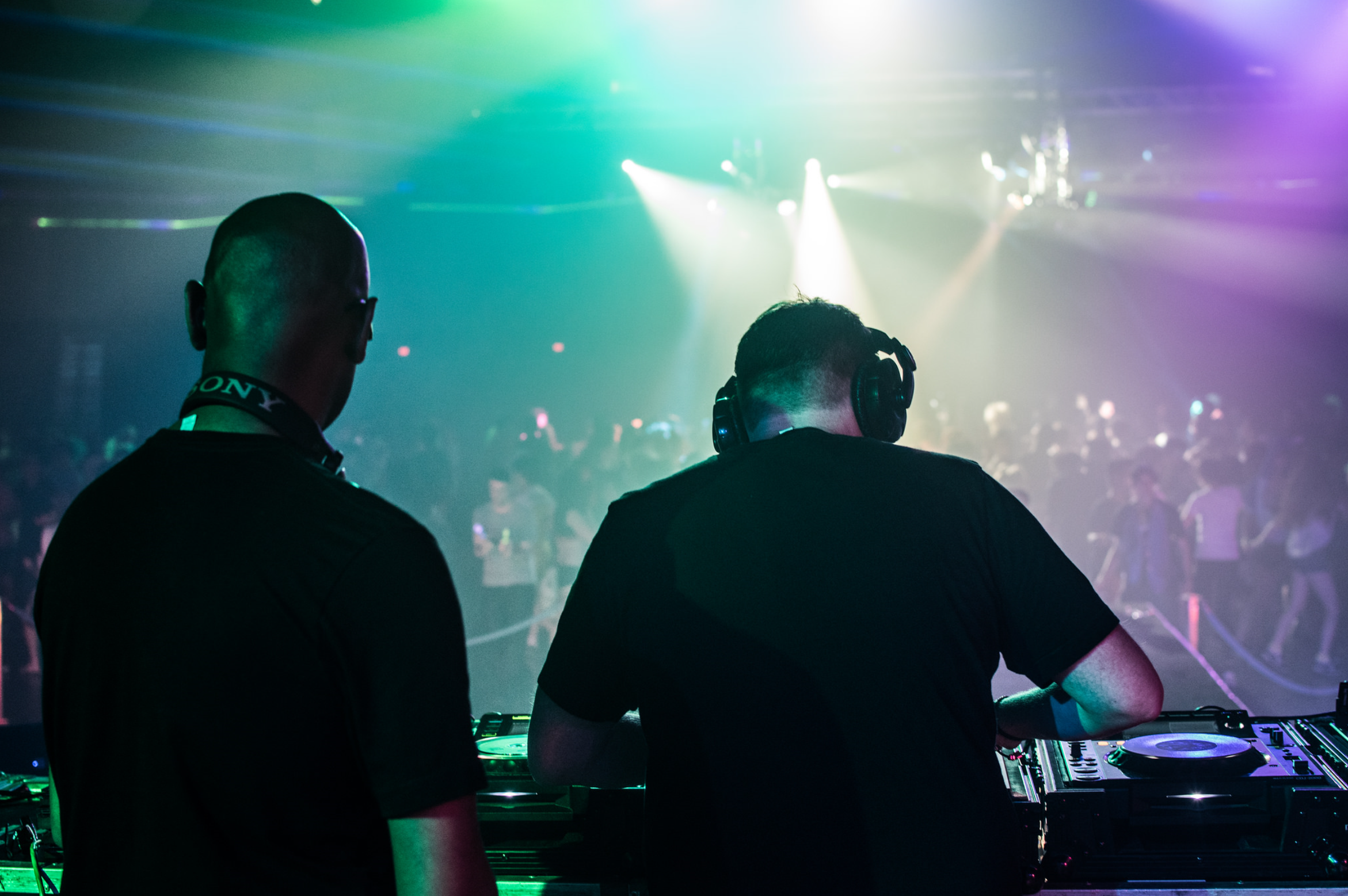 If you could play at any event or venue in the world, what would it be and why?

F&D: We’ve always liked playing multi-genre events, and taking what we do to new audiences, so we’d probably have to say somewhere obvious like EDC or Ultra.

Do you see yourselves branching out with making more music that incorporates other genres?

F&D: Our approach to writing has always been quite diverse and we’ve always been big fans of other genres, I guess we’ve been quite Eclectic with our productions over the years. Our next artist album (due for release in October) has House, Breaks, D&B tracks on it as well as the harder material. We like the freedom to be able to work on whatever other genres we like without compromising the music we’re best known for.

Who are some of the artists and DJs you look up to in the industry?

F&D: There are too many individuals to mention really, but we’ve always looked to artists who continually push forward with what they’re doing and try to keep things interesting. As a DJ, Slipmatt is someone who we’ve always admired because of the wide variety of music he plays, and the consistent way in which he’s re-invented himself and embraced new technology over the years. Andy C is another great example of a DJ who plays across the board, and who pushes new music and artists forward whilst he does it. We’re also huge admirers of people like Above & Beyond who have reached great levels of success without compromising, and who still produce music as pure and true to their roots as they ever did. 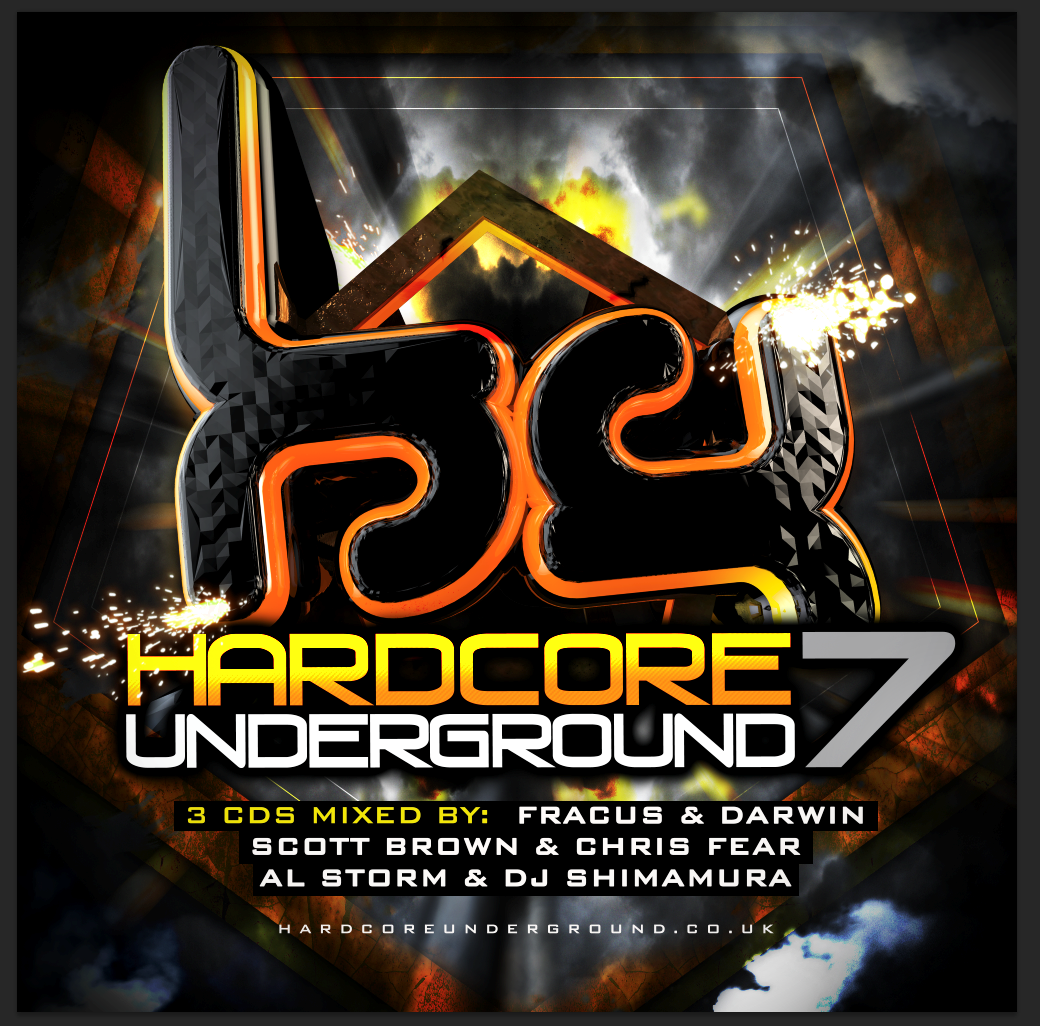 What is your favorite track you have created and why?

F&D: It’s an old track now, but probably something we wrote called ‘Free From Form’ a few years back. It’s the first time we really managed to incorporate all the elements we really like in one single piece of music, and we were lucky enough debut it on Radio 1 here in the UK, so we even had the chance to explain to people exactly what we’d been trying to do before we played it. We’ve written an awful lot of different tracks, so if you asked us tomorrow it might be a different answer, but that’s definitely one we were extremely happy with at the time.

How do you believe your music influences your fans and listeners?

F&D: The most rewarding thing for us to either see people having a good time on the dance floor, or to have them come and say that something we wrote really meant something to them in some way. If our music  can have a positive influence on people, be it improving their mood, making them dance, or even just remember a happy time in their life, then there’s not really anything more we can ask for. 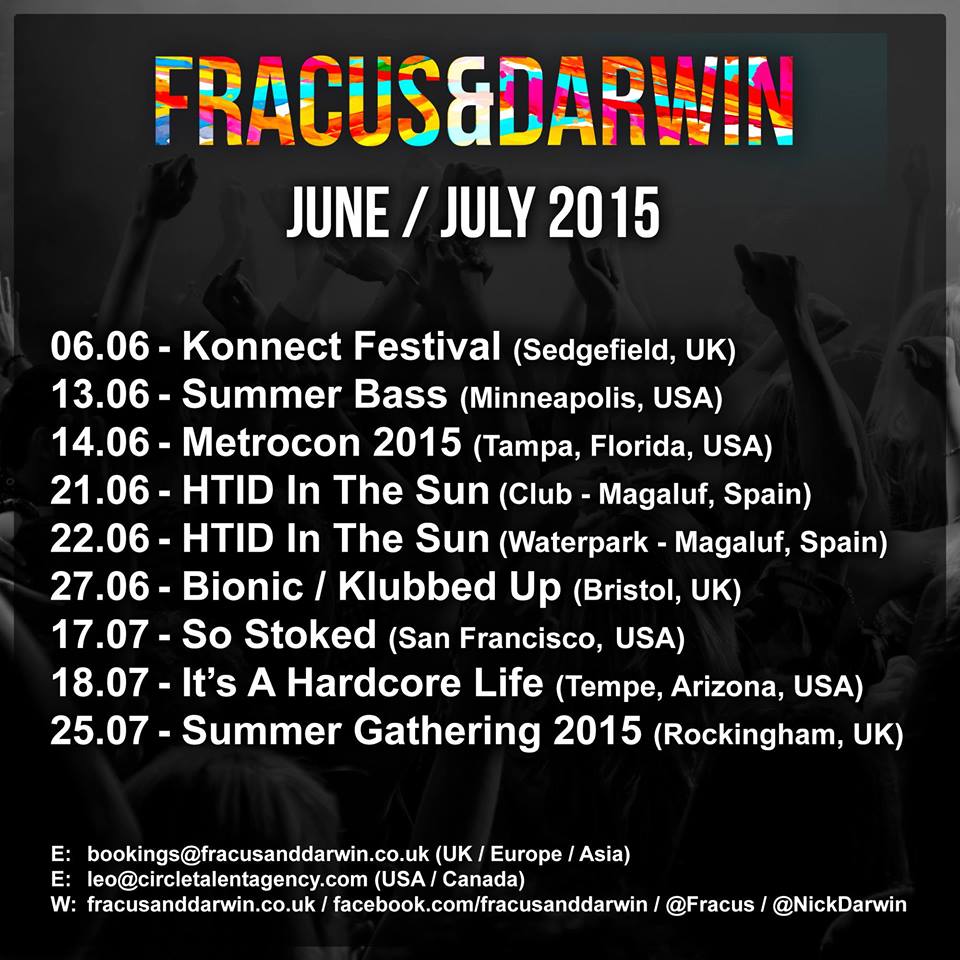 What were you hoping to gain in your latest touring adventures?

F&D: We love taking new music to new audiences, so as well as showcasing everything we and the music represents, we’re also trying out a lot of the material from our upcoming fourth artist album. It’s a real privilege to be able to travel and show people what we’re doing, so we do everything we can to make sure we don’t disappoint the people who come to see us! The music we make and play in all it’s forms is something we’re as passionate about now as we ever have been, and if we can be one of the acts who help fly the flag for it on the Global stage, then we’ll always give it 100%!

It sounds like these guys have their fans in their hearts, as well as their love for the music they play and create. I absolutely cannot wait to catch their performance, as I am sure they are not a duo who will disappoint. Be sure to check out Fracus and Darwin on future tours, and listen to their sets and productions. There’s clearly no stopping these guys on their journey to live out a hardcore life.