Ever since The M Machine broke out, fans were captivated by their creativity. Instead of sticking to traditional electro sounds, The M Machine focused on melodic, genre-defying tunes that caught the eye of music icon Skrillex over four years ago. After their Metropolis EP dropped in 2012, they were sought after by every DJ, opening for acts like Porter Robinson, Markus Schulz, The Glitch Mob, and plenty more. Most recently, Ben and Eric released their Just Like EP, continuing their strong relationship with Skrillex and the OWSLA label.

Currently The M Machine are wrapping up their tour with Golden Features in Australia, which sold out multiple shows in Sydney, Perth, and Melbourne.  We’re giving our fans the choice of one of two shows at two amazing venues when they return home next week. Two lucky fans will win a pair of tickets to see The M Machine at Beta Nightclub in Denver on July 23 or Opera Nightclub in Atlanta on July 24 (one winner for each location). The contests are officially open, and both winners will be announced on July 22nd.

To enter the contest for Beta Nightclub, enter here.

To enter the contest for Opera Nightclub, enter here. 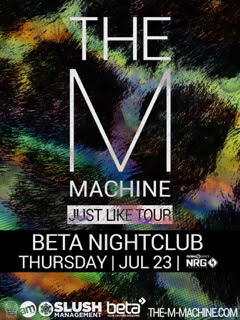 The Chainsmokers – Good Intentions (Speaker of the House Remix)