As a ticketing platform, Eventbrite has done far more with its plethora of data than anyone could have possibly expected them to. In the past couple of years, they’ve released studies concerning the link between music fans and social media, as well as detailing the cost of an average night out across genres.

Most recently, they’ve come out with a study detailing the path and value of music discovery. In an age that is highly digital and extremely short on attention, it’s valuable insight for both promoters, booking agents, and media on how to keep track of rising trends in music discovery, and what it takes for consumers to end up on the dance floor.

There’s a lot of information and rumors swirling around about the current state of music, whether that’s streaming, purchasing, or live shows. Berklee College Of Music released a study that attempts to delve deeper into these rumors and find their veracity, but Eventbrite went into the statistics and financials of it.

In the end, one of the most important factors in music consumption is the desire to see music live. Eventbrite found that…

Fans that buy concert tickets are worth more. They spend nearly twenty times as much on music (including tickets) than non-ticket buyers: $276 compared to $15.

In no uncertain terms, that is a staggering number. However, that doesn’t mean that seeing your favorite groups live absolves you of all other “fan obligations.” It’s good to remember that statistics are useful to the group, but not the individuals. So if you as an individual aren’t contributing to music sales, that number means nothing.

Another extremely valuable part to the study was an examination of how people actually discover new music. It turns out, that even in a society as attached-at-the-hip to social media as we are, that platforms like Facebook, Twitter and Tumblr only account for 14% of music discovery. The clear winner, as it has been for decades, is still traditional media – TV, radio, word of mouth – at a whopping 68%. 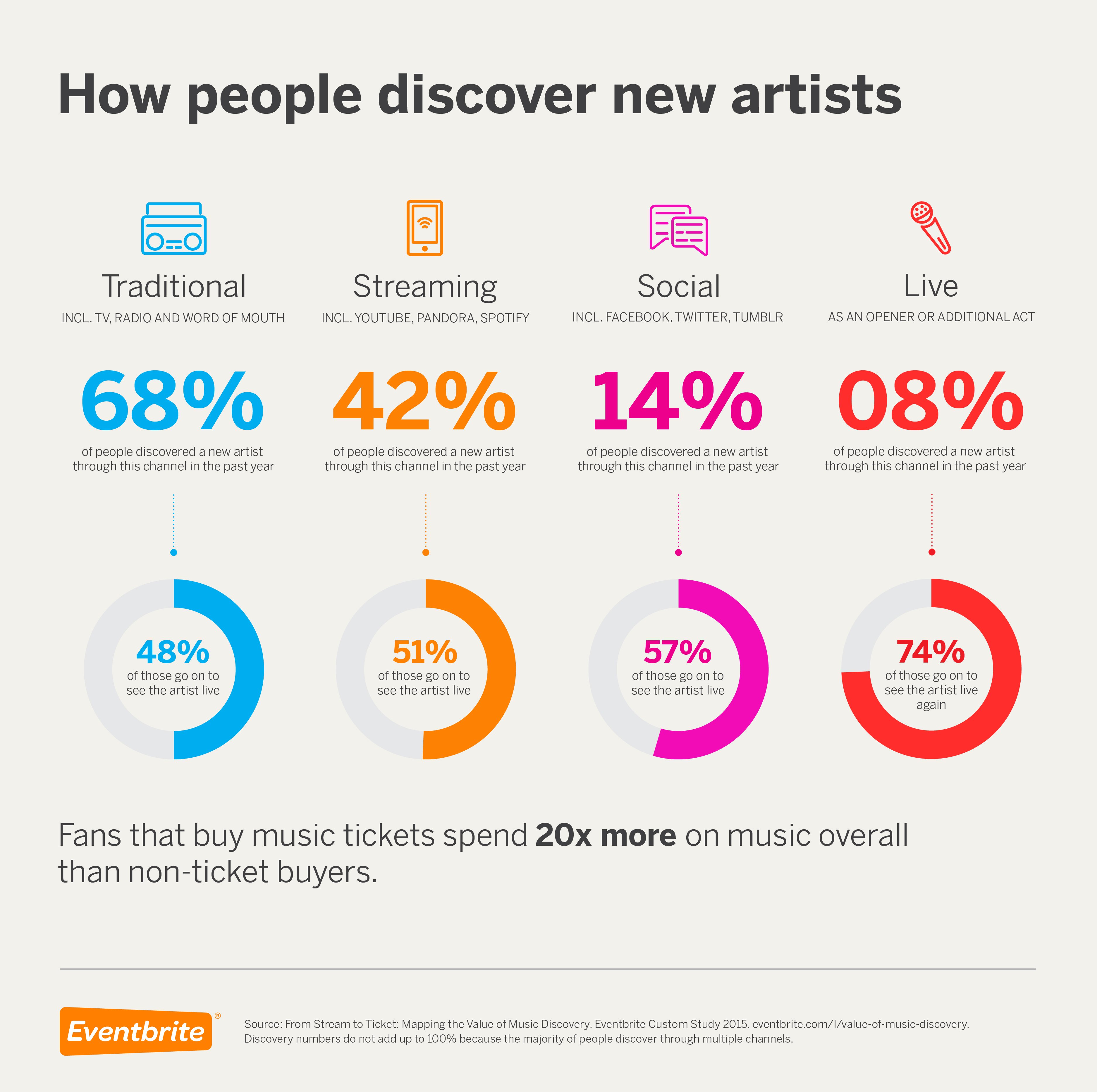 Again, those numbers don’t tell the whole story. As you can see by the numbers on the bottom row, even though music discovery via traditional media is highest among those platforms researched, it has the least likelihood of you seeing an artist live. The best way to tell if an artist is good live? See them live.

The 8% of people who say they discover new artists while at a concert, show, or music festival are significantly more likely to purchase a ticket to see them perform again later.

Eventbrite makes it clear at the end of their report that “[w]hile linear forms of discovery like radio-to-consumer are still very much alive, music discovery today is a more integrated process. Streaming, social, and live are on the rise, and ultimately serve as key contributors to the upward trend in live music spending.”

So if you don’t fall neatly into any one of these categories, don’t take it too hard. As long as you feel like you’re contributing in some way to your favorite artist’s success, I’m sure they’ll appreciate it.

7 People You Meet at Raves

7 People You Meet at Raves