by Georgia Modi
in About, Editorial, Events, Reviews

Processed with VSCOcam with c3 preset

This past weekend was a lot of firsts for me. For one, I (along with a couple thousand other people) got to experience Mamby on the Beach for the first time. A brand new beach front festival brought to us by React Presents the same company that puts on Spring Awakening at the beginning of the summer here in Chicago. The festival went off with a bang and after two days a lot of us were left wanting more and thankfully I was lucky enough to be invited to a private after party Sunday night… on a yacht. I don’t think I could have said yes quick enough. It was later on that I found out that Cherub would be the one’s providing the music for the evening.

Come Sunday night once the rest of the festival was over a group of us patiently awaited for the golf carts to drive us a short distance to the near by harbor. Upon arriving and getting to the dock we could see a far off boat with lights and the faint thump of music coming from it, so naturally we headed straight to it. 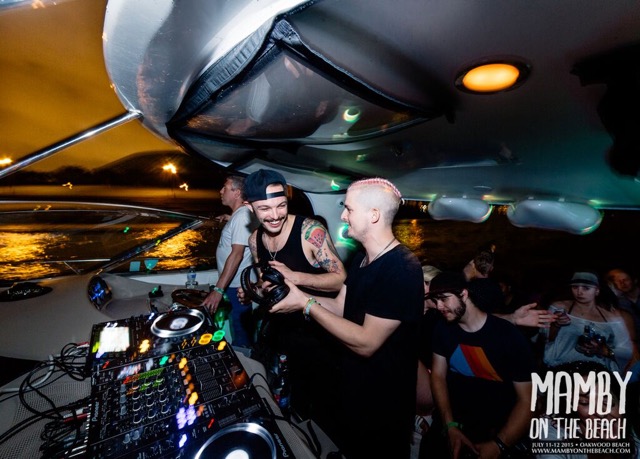 Weekend yacht parties are a staple during Chicago summer and you really can’t beat some time out on the lake listening to great music. Yet for some odd reason I had yet to experience one of these parties so once I stepped on to this one my hopes were set high for a great time. By the time I got there, Jason, 1/2 of Cherub, was already on the decks that were positioned right next to the wheel. People were dancing about, chatting it up, or heading below deck to grab themselves a drink so naturally I joined in to all 3.

It was somewhere around midnight when we were finally able to set out into the water. I can easily say that this was my favorite part of the weekend, sitting on the front of the boat and watching the city go by as Jason and Jordan were on the decks behind me. Couldn’t have been a better way to wrap up the weekend. It probably helped that these guys are also just talented, nice, and fun people to be around. From Jordan bringing his little Frenchie, George, on the yacht (which coincidentally was named “Womp”) to playing a late night RV after party back at Electric Forest just a few short weeks before. Having them there definitely made the night that much more special.

After all was said and done and the boat was finally docked, a small group of us, Cherub included, made our way to The MID where Art Department was having their after party. And as tradition goes with festival afters in Chicago, Cherub went on to play an impromptu set there. A definite cherry on top to the entire experience of that weekend and that night.

Be sure to check out the full review for Mamby on the Beach here!

The Chemical Brothers – Born In The Echoes [Album Review]

The Chemical Brothers - Born In The Echoes [Album Review]