Since my move out of Southern California to Chicago, I’ve been lucky enough to return home three times for short visits. Each time I step foot out of the LAX baggage claim and into a car, heading back up the 405 toward the 101 exchange, I’ve been able to feel the silent, starstruck wonder of the city that I’ve always heard so much about. The vibrancy and life of Ventura Blvd (yeah, I’m from the Valley), the dark and distant hills separating the city from the ocean, the ever-present glow of yellow light resting above the horizon, and the general feeling of motion, evolution, and creation stemming from the biggest event centers all the way to the tiny, curbside scrawls of graffiti all play a distinct part in the cultivation of Los Angeles’s magic. It takes distance to fully understand the beauty of what’s been near for so long.

It’s partly because of this newfound outlook on the city that this year’s HARD Summer Music Festival was so special to me. Getting to experience my favorite festival in my favorite town, I knew it was going to be something to remember. This was my third year attending HARD, and the line up couldn’t have been more tailored to my kind of music. There was seldom a gap between sets where I had no one to see. Across all five stages, a fresh, exciting artist was constantly playing out their best work to a crowd more passionate than almost any I’ve seen. The hype was palpable as we entered the Blue Gate at 10:30am on Day 1. 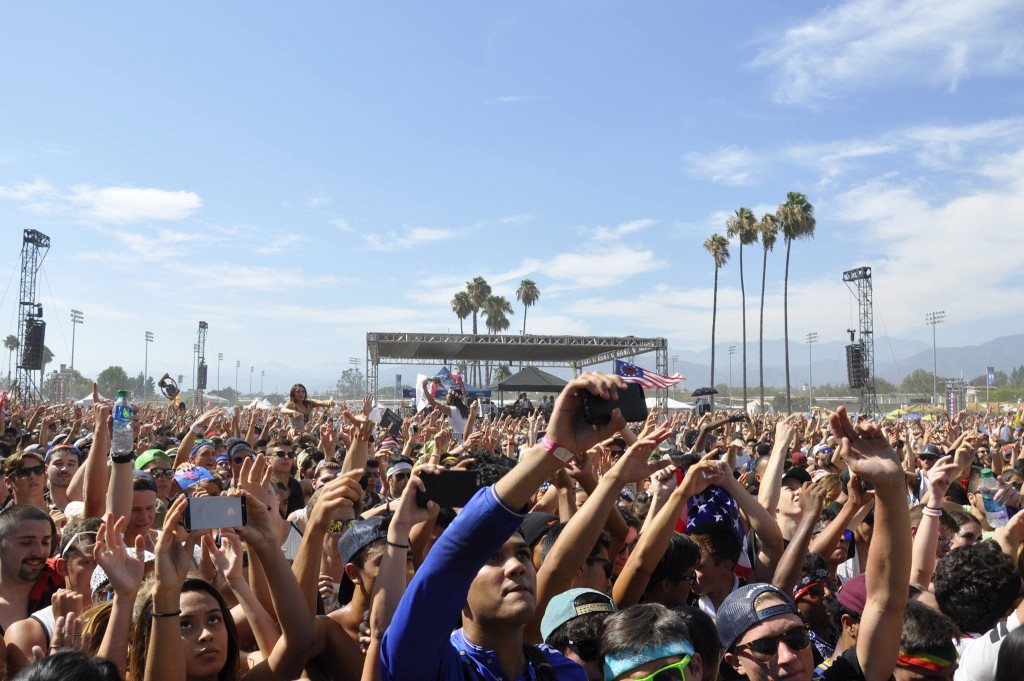 After stopping in Hollywood to pick up our media wristbands, our editor-in-chief Matt Meadow and writers Daniel Cha and Michael Dix and myself headed to Pomona. We arrived in the parking lot nearly an hour before the gates opened, so we sat in the car taking swigs out of a Seagrams bottle and writing in the dust on the back windshield. As the crowds poured in, we beelined to the crucially air-conditioned 7-Up Stage to catch Overwerk start the weekend with a heavy, electro-oriented set to a growing crowd of not-yet-dehydrated fans. The darkness and solitude of the building made for an intimate and intense beginning to the day. Even though we were forced to fight through throngs of attendees to make it out, we had to haul over to the main stage for Ganz‘s first appearance at HARD. 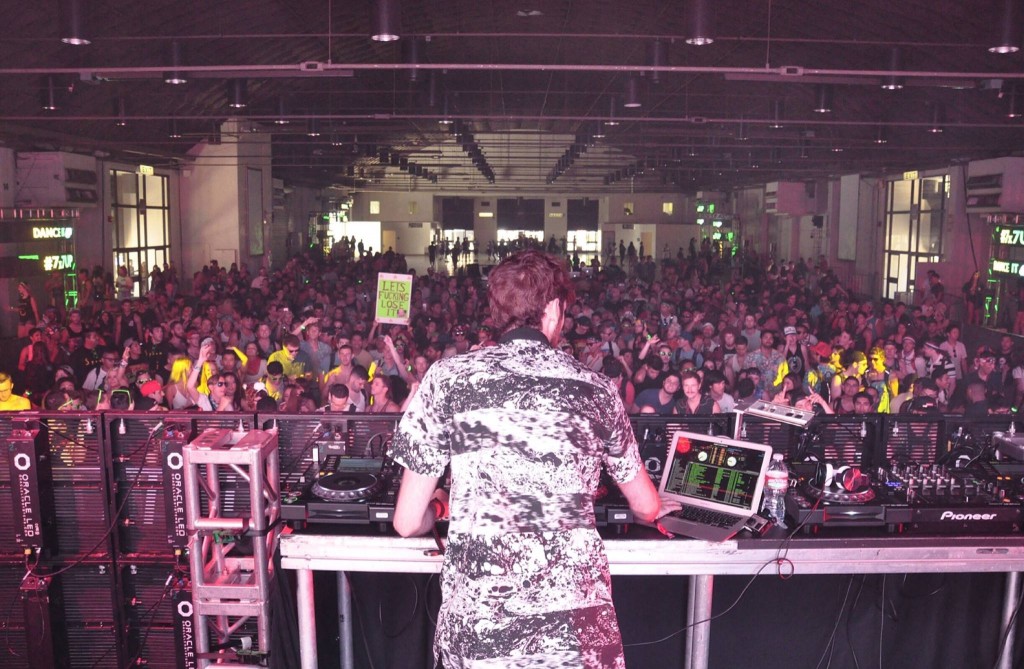 After shuffling down the long, dusty path that hooked parallel to the stage, we turned the corner and sprinted to the front of the crowd. Ganz was placed at least 30 feet up in the booth, and began to transition into Lindsey Lowend’s remix of Carmack’s “Roller“. A classic favorite for our group, we had no choice but to throw elbows and begin our three-set stay at the stage. Ganz continued to drop heater after heater from Rustie, Mura Masa, TNGHT, What So Not, Danny Brown, and more while the sun began to broil the back of our necks. It ended up as one of my favorite sets of the weekend; he knew exactly what the Los Angeles crowd was looking for.

Next was Dirtyphonics on the same stage. The beginning of their set saw the sound system cutting out several times, being accompanied quickly by cheers and chants from the audience beneath. “TURN IT UP, TURN IT UP” could be heard echoing from the back of the mob more than once, and eventually the crew was able to figure out the problem and deliver a walloping set. From DnB to festival trap to straight metal, Dirtyphonics took their set down an entirely new avenue. The crowd continued to grow as the sun rose higher in the sky.

Djemba Djemba was one of my most anticipated sets coming into this year’s HARD. Seeing him perform last year under the tent and close with the previously unheard collaboration with RL Grime “Valhalla” was one of the most jaw-dropping experiences I’ve had. The gang and I were sure to be standing as close as possible when Dirtyphonics handed over the decks. Beginning with a take on “Forever Love“, Djemba quickly dropped into a deadly trap remix of “Deep Down Low“. Unfortunately, his performance wasn’t entirely what I hoped it would be in the long run. He played lengthy sections of Jersey-style tracks, R&B, and even something that sounded like Jungle Terror. This would’ve all been incredible in a club setting or at a normal gig, but I expected only the nastiest and hardest hitting songs to come out of his HARD Summer set. As we left the main stage, we could hear conversations around us echoing our own: “why didn’t he play his ‘Core‘ flip…”. 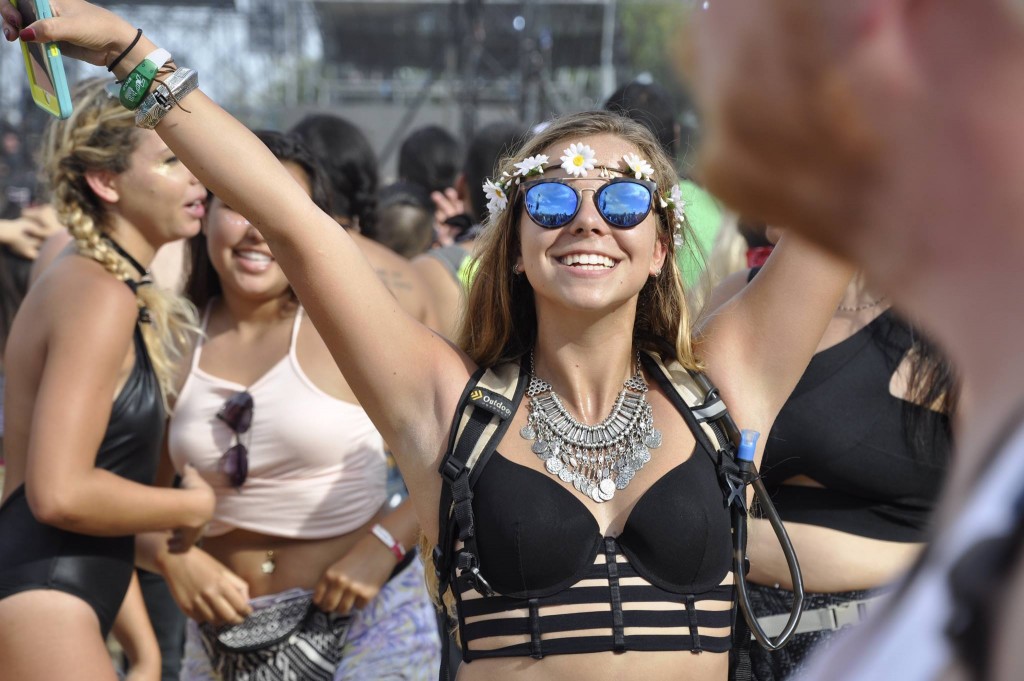 After a quick stop at the wonderful grilled cheese truck, we made our way to the Purple Stage. Sweater Beats‘s set was nothing short of spectacular, and actually closed the stage from any more people due to how packed it was. From Salva to Slumberjvck to Baauer, he made sure to woo the crowd with everything I’d hoped to hear. As he winded down, we were upset to find out that Young Thug would not be following. He tweeted earlier in the day that he would not be attending, amidst rumors that he was arrested, but both he and Schoolboy Q disappointed us with their lack of effort toward filling their slots.

Lido stole the weekend with a performance worthy of contemplation. He started out with a short piano-laden monologue, letting us know that it wouldn’t be an “EDM show”. He had three or four keyboards on stage, a drum pad, a microphone, and a small array of bright, rotating light stands that were used throughout the entire show. Playing all of his most beloved hits, he incorporated astounding and perfectly on-time live additions with his instruments and voice. His was truly a standout within the rest of the weekend.

After a Cashmere Cat set in the Pink building, we hustled back to the main stage to see Dillon Francis‘s headlining act. The sight of the stage and surrounding grounds was nothing less than epic. The slight hills jutting from the earth and small outcroppings of palm trees were topped with dancing, silhouetted figures raised slightly above the rest of the ocean. The bleachers to the right of the stage were filled to the brim, and the people stretched back for what seemed like a mile toward the ring of light emanating from the carnival rides at the end of the Fairplex. The set itself was an interesting one. The previous two years, Dillon had played a destructive masterpiece of tracks from himself and his friends, creating an atmosphere directly tied to the overall HARD nostalgia. This year, however, almost every single song was his own. It seemed like a regular concert, rather than a wild mash up of great tracks from all corners of the spectrum that I’ve become used to hearing from him. Even though it’s always incredible to hear Dillon play out his own material, it was made slightly less special due to the lack of other material to compare it to. 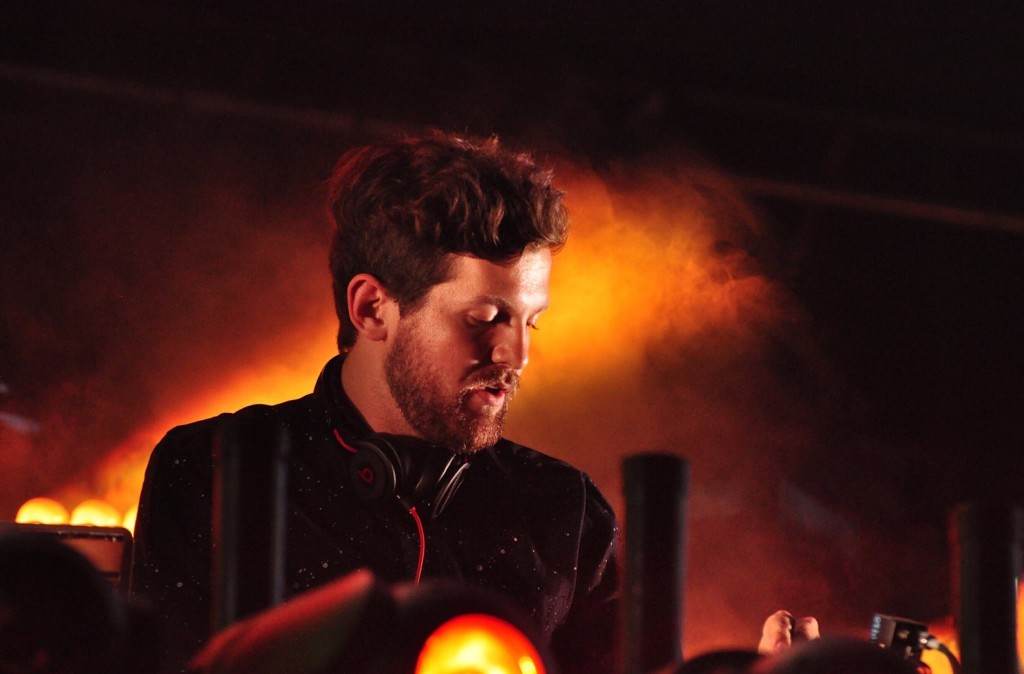 Papermind Creates Heavenly Remix of ‘The Other’ by Lauv

Papermind Creates Heavenly Remix of 'The Other' by Lauv