by KSpence
in EDM News, Featured, For the lulz

Now, I’ve done a lot of things in my life that pissed my mom off – talking back, staying out past curfew – but nothing that’s ever caused my mom to actually disown me. I also didn’t sneak off and go to a festival at just 17 years old. 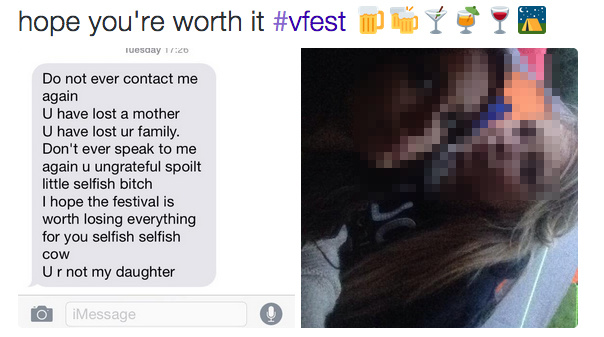 Over the weekend, a teenage girl ignored her mother’s wishes and hightailed it to V Festival with her friends. The resulting backlash, an incredibly angry text from her mother, ended with “You are not my daughter.” Vice sought out the girl for an interview, and while she had the time of her life seeing Annie Mac and Calvin Harris, she’s not as spoiled and selfish as her mother might believe her to be.

The teen ditched babysitting her younger sisters while her mother worked at the family restaurant to campout at V Festival. She still hasn’t spoken to her mother, whom she assumes won’t be the first to break the silence. While I’m all for teenage rebellion as it’s practically a rite of passage, but I can’t side with a teenager who would run off to a camping festival, leaving her two younger sisters alone and working mother on her own. Still, I’d like to think the two will resolve their issues, especially since the teenager did understand the severity of her actions. Read the full interview here.

WRLD Talks About New ‘Chase It’ EP, Monstercat, and His Start in the Industry [Your EDM Exclusive Interview]