Zeds Dead has got huge news!

Not least of all is their new track out now with Murs on the vocals called “One Time.” Embracing a history of talented vocalists, Murs was a no-brainer. The track is a hands up banger, focused on delivering the most exotic synths and booming basslines that a sound system can handle. Though the track might sound a little hollow on your stock laptop speakers, expect it to destroy dancefloors.

Second bit of news is the announcement of their “2 Night Stand Tour.” The duo make their way to all corners of the US and Toronto on a short but massive tour, featuring dual nights in each stop. We expect massive support on these stops, and can’t wait to see who they bring out.

Since tickets are expected to sell out very quickly, Zeds Dead have opened up an “early-bird ticketing request system to ensure that the fans have access to these tickets first.” Go here to check that out. The request period is open now and closes September 14th, so don’t dilly dally. 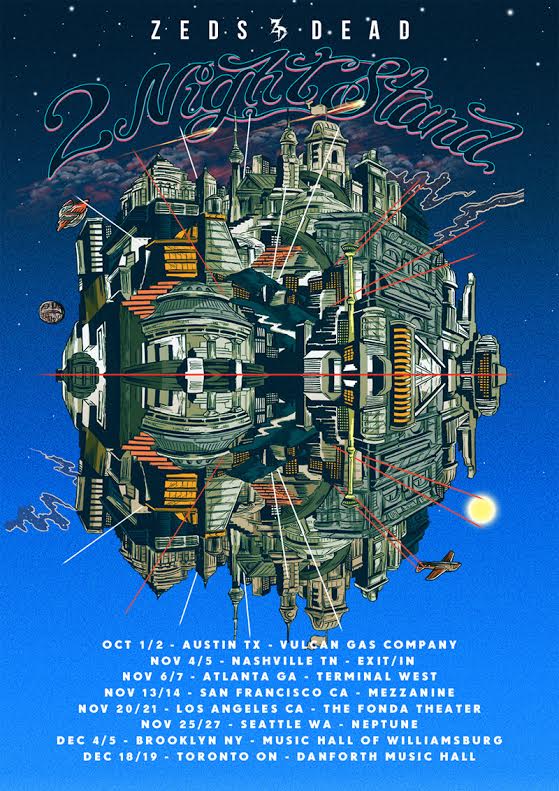 Last but not least, in the Facebook announcement for the tour, Zeds Dead drop some huge news that you wouldn’t even notice if you just scanned over it. Zeds Dead are indeed working on their debut album. No word on a release date yet, but if you’d like to hear some of the unreleased tunes from the project before they’re out, these shows are your best bet.

Today we announced a very special series of shows – The 2 Night Stand Tour – stopping by a few of our favourite cities in North America for an extended two night stand in some the most intimate and historical venues around. We wanted to go back to our roots with this one, away from the festival stages and big rooms, into the same rooms that rock and rolls greats came up in. And to give you a first chance to hear the unreleased music that we’ve been working on for our forthcoming debut album in an intimate room surrounded by fans and friends.