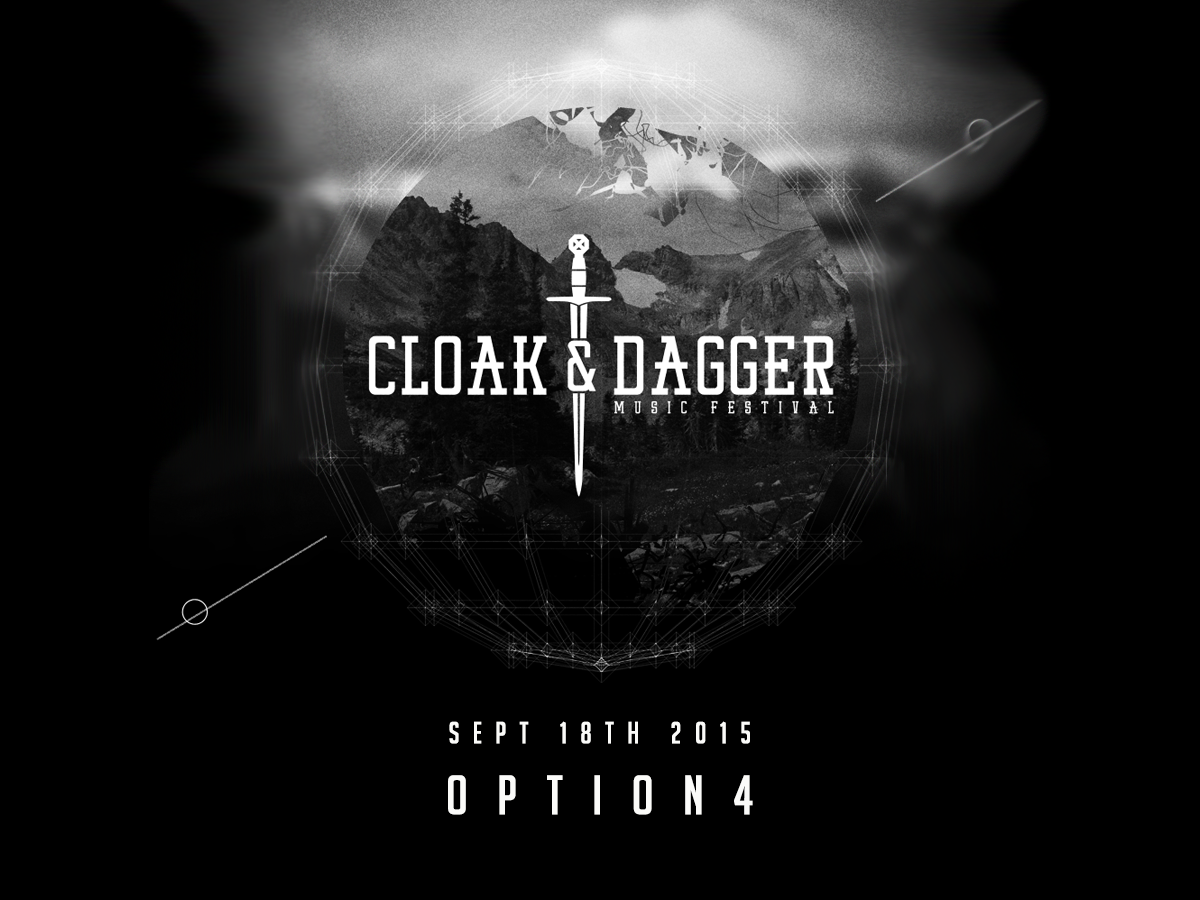 As a Colorado native, I’ll be the first to tell you that Denver is one of the greatest places on Earth. Not only do we have the most beautiful state in the country, but we also have one of the most vibrant musical and creative scenes. Despite its small population, Denver has played host to scores of the best talent available in electronic music. If EDM is your thing, we have Beta Nightclub and Global Dance bringing in massive pop-EDM names from the festival circuit and occasionally talent from the halls of electronic history. Or, if you prefer smaller, more intimate events with more mature crowds and more eclectic and independent talent, one of the most exciting crews around, TheHundred, has you and the underground completely covered.

TheHundred is one of the more unique brands I’ve seen in dance music to date. Headed/Organized by producer turned promoter, Option4 (Brennen Bryarly), TheHundred is looking to blow things up for the return of their second annual Cloak & Dagger music festival.

We were able to sit down with Brennen and talk about the history of this special organization, his ethos on curating and promoting Denver’s hottest parties, and the future for TheHundred and Cloak & Dagger.

Brennen Bryarly is a personality in and of himself. Whether it’s his absurdly excellent Ghetto Fab attire, or his charisma, its clear why people have been attracted to this gentleman and his crew’s parties.

Option 4 & TheHundred’s histories are about as unique as they come. Brennen’s career started at the age of 16 on his dad’s Roland XP-80. Shortly thereafter Brennen was out playing 90-minute sets of completely original material. Things began to heat up.

“I was doin’ jackin-garagey type house, you know, back in the day. My car had just gotten Repo’d because, I was behind on payments, I was a month behind rent, then I put out 3 songs with Nancy Liu with the last money I had, and all of a sudden I start blowing up. 5000 plays, 12000 plays, 25000 plays, all original, then I premiered a remix I actually wasn’t as passionate about as my originals, then all of a sudden I was slamming out song after song of 500,000 plays (half a million)…”

All of a sudden, I started realizing, I’m just going to take this a lot more serious. I pumped out remix after remix after remix, got an agent, and then my next big original record on Nervous ‘Love Like No Other’, one of the smartest pieces I’ve ever written, was when it started peaking.”

TheHundred much like Option 4 had humble beginnings but grew into something very special.

“I would go to 3 or 4 shows a week, at doors, and find the person grooving @ 9:30. I figured they either knew the band, or they were there for the whole experience. ‘Hi, I’m Brennen, I got this crazy Idea. How would you like to throw your own show? I’m going to let you in for free. Here’s our secret website, you guys can vote for who you want to come out. – They were always skeptical.”
“The reason I let everyone in free was because I knew… Nobody wants to go to a show alone. 100 people brought friends and became friends with hundreds more, Everyone’s social circle blew up because they had something in common- and that made the vibe something tangible.

There were 100 members in TheHundred, with the free key chains that guaranteed entry +1. Out of nowhere, the first year we sold out all the way through. There was no way to get in! (11 months in a row, once a month).
They were invested in making it dope.

And dope it was. TheHundred spawned the one of a kind festival ‘Cloak & Dagger.’

To be honest, I was incredibly blown away by the vibe of my first Cloak & Dagger. There was absolutely nothing ravey about it, which really allowed my friends and I to fall into the simple enjoyment of music. People were friendly, the atmosphere felt welcoming, open, and most importantly controlled. The crowd across both venues was visibly having a terrific time and most importantly had showed up early to dance until the house lights came on. None of us saw any health or safety concerns and most importantly, not a single medical takeaway occurred that night across two venues. Given the usual “healthy” amount (pun intended) of takeaways from EDM shows, this atmosphere was somewhat unusual. During the conversation Brennen was happy to tell us that he had never had a single ambulance takeaway from a single one of his events, which he owed to cultivating the right culture and keeping the crowd size manageable.

It’s this unique ethos that keeps TheHundred ‘s family vibe. But make no mistake; this isn’t a family that’s just going to stay localized to Denver. The idea behind expanding the vision isn’t to go be the next Wal-Mart of EDM, trading humble beginnings for shitloads of cash. TheHundred doesn’t want to expand the size of the events, but it wants to cultivate its vision and bring the accessibility to underground talent to more than just Denver.

Is TheHundred, the concept, the way forward? The answer to SFX, AEG Live, etc?

“It is in Denver. It can be done, but it has to be done with very selfless motives. TheHundred only exists today because I haven’t asked them to do anything for me EVER outside of what they offer. It’s a service. It’s always been beneficial for THEM. Sure, technically I make my living off of it, but monetization isn’t the goal. That’s the general basis for corruption, is when monetization takes over.

My tickets are cheap, everything is affordable, I mean the fact that you can spend $40 for the lineup of cloak & dagger is UNHEARD OF. If any other promotion company in Denver was throwing this show, and spent the money I did, In Denver, the tickets would be $90-100.

Could it work in other cities? 100%, the most important thing we’re going to be finding out this year and next, is whether or not the culture we have here works out in other cities. The proof will be in 2 weeks when we go to Dallas and see if it works.

We are aiming to express ourselves in the same spirit, and represent Denver right. If our culture rolls over to those people, then that’s tight! If not, we may have to acknowledge that what we have maybe only is a Denver thing. We have to try to find out.”

In the money centric, bigger is better world of EDM, it’s comforting to know that people like Brennen and TheHundred are carrying on unphased, realizing their boutique vision of partying with the underground. Even if the predicted EDM bubble pop comes to pass, people like TheHundred are laying the groundwork to keep electronic music alive and well. Join the party and grab your tickets for Cloak & Dagger 2015.

Seriously though, keep your eyes out for TheHundred and Cloak & Dagger, we can’t say much yet, but the future looks bright for these guys.