It is an interesting concoction when two people decide to team up in making electronic music.  Instead of relying on your own personal taste and gut feelings you have to consider the other person and his/her thoughts and feelings.  But, on the other hand, having another person to lean on, to be there when times are tough, etc. is proof that there is a method to the madness.  GTA is reminiscent of Calvin and Hobbes: creative, imaginative, and they share a passion for a good time and making bangin’ music.

GTA, or Good Times Ahead, is a bass heavy electronic music duo from Miami. Matt van Toth and Julio Mejia are the absolute definition of a “good time.” Their music history together ranges from Moombahton and Trap to BPM’s that defy the genre stereotypes.  But, before they started climbing the ladder to becoming bass gods they lived a pretty typical life.

Matt and Julio were born and raised in Miami, Florida.  GTA has a significant love for growing up in Miami.  Miami is probably one of the most interesting cities here in the United States, if not the most.  It has become a harbor for Latin, Caribbean, and American culture all in one and a music hub for Salsa, Bossa Nova, Merengue, etc., which, in turn, has created the “Miami Sound.”  Matt expresses, “Going around from city to city, there is really no other place like it in the U.S. The amount of South American, Caribbean, and U.S. culture that is mixed into one place is unlike anywhere else in the world. When you enter a store they automatically greet you in Spanish and most people speak Spanglish.”

Julio grew up loving to watch karate movies with Bruce Lee and Jackie Chan, which inspired him to enroll in Tae Kwon Do classes.  He became a skateboard fanatic who loved listening to music like it was his religion, which ultimately allowed him to figure out that he wanted to pursue music for a living.  Matt experienced life a little bit differently than Julio.  Matt always loved music and listening to the radio, but he never dreamt of becoming a famous musician.  He just went about life regularly and music came into life much later.  Overall, Matt and Julio both are pretty quiet and shy people.  But, when they get up on the stage performing their music they instantly turn into extroverts that love to get the crowd wild.  Hence their name: Good Times Ahead.

Although Matt and Julio didn’t know each other yet they had similar tastes in music growing up.  Both had a love for Rock and learned to play the guitar as teenagers.  Julio recalls, “I started playing music in the 5th grade. I used to help my mom (who was a housekeeper) at work and she would give me 20 dollars every week. I saved up and bought a guitar!”  Julio joined band in 7th grade and studied music through college.  Matt was also in his school’s band, and senior year of high school began messing with music production.  He explains, “I was never in a band outside of the school and I wanted to record myself playing guitar so I started looking into DAWs and learning some basic production. I heard Benny Benassi’s “Satisfaction” on the Apple iPod commercial and loved how crazy it sounded and then I started getting into Electronic Music.”

Matt and Julio ended up meeting through a Facebook friend when they were in college—an opportune time since electronic music was very new and exciting for them.  Together, they made the perfect team experimenting with production.  After figuring out the ways of electronic music, they submitted their tracks onto online forums, such as Laidback Luke’s.  Laidback Luke, along with several other legends like Diplo and Atrak, began chatting with them.  Upon getting noticed by these big time artists, GTA’s music career was in for a treat.

GTA says that their ride into the music industry has been nothing short of amazing.  They get to travel and see the world, collaborate on productions with big name producers such as Diplo and Martin Solveig, and are enjoying every second of it.  They express how rewarding this experience has been for both of them.  Matt says, “This entire journey has been extremely rewarding in itself.  I mean I never ever thought that I would get to play out my own music that I created with my hands and have people enjoy it like they do.  Even more, getting paid to do this all over the world is insane.  It really is a dream come true.”

Every success story does come with challenges though, and GTA has had their fair share.  Although Matt and Julio have a lot of love and respect for Miami, starting a music career in this saturated city was rough.  Miami stores some of the biggest clubs in the U.S., like LIV, Miami, and Space. Since GTA music isn’t quite the “Top 40 EDM”, it was pretty difficult for them to break into the scene because a lot of those clubs can be biased when it comes to big names in music.  They would get brushed off.  When they did end up landing gigs, sometimes they didn’t sell the right amount of tickets and therefore, wouldn’t get paid.  But, in the end Matt and Julio’s persistence has paid off.

Also, branding has been a more recent struggle for GTA too.  For Matt and Julio, they want to continue experimenting with their music and not stick with one sound.  GTA is the definition of genre-hopping and pushing the boundaries.  But, in return, it presents a large challenge: conveying the true meaning of who they are to their fans and the rest of the world.  All of this ties into GTA’s “Death to Genres” collection. “Death To Genres came from what we wanted to emulate with our music,” Julio states.  In short, “Death to Genres” means that anything goes.

Through trial and error, and the good and bad times, GTA is climbing their way to the top.  With inspirations ranging from the Neptunes to just the general good feelings they get on a regular basis, Matt and Julio continue to persist in producing the music that they want to create.  Their fans help them persevere and truly love what they do.  The moments that they hear the crowd go “OHHHHH!” are the memories that they continue to carry with them.  Julio wants his fans to know, “Keep doing what you want to do! There are no boundaries unless you give yourself some, and if something is dope to you, then it’s dope! Just ride with your gut and keep an open mind!”  Matt adds, “…never give up. Having the passion to continue spending countless hours legitimately working on what you love will always pay off.”  Together, they prevail!  And, in this case, two is better than one.  There is definitely Good Times Ahead for Matt van Toth and Julio Mejia.

Be sure to check out GTA on their U.S. tour this November! 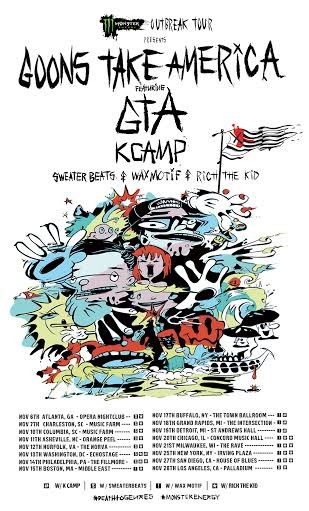 FTampa – Strike It Up [Musical Freedom]

FTampa - Strike It Up [Musical Freedom]