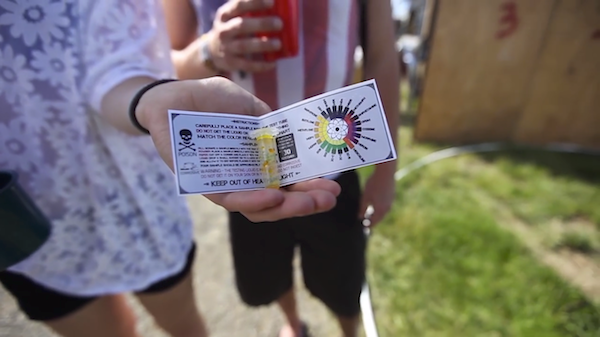 Bringing test kits into festivals is a needlessly difficult endeavor. Festivals risk liability by tacitly allowing test kits on the premises, citing the RAVE Act, and the supposed willingness and acknowledgement of drugs on site. So what can an organization like Bunk Police do when drug testing kits aren’t allowed?

A man named Adam, representing Bunk Police, believes “that at least half of festival-goers use drugs.” But his main concern is keeping them safe, not sober.

“There are quite a few deaths every year from adulterated substances and permanent injuries that occur, so we know that this prevents some of that.”

Adam smuggled in 15,000 test kits to Mysterland this year in Bethel Woods, NY, the site of the famed Woodstock Music Festival in 1969. He passed out flyers at the event, and let people know where they could find him to have their drugs tested for potency and content.

All of this will come out on CNN in a segment called This Is Life tomorrow, November 4. Watch the trailer for the episode before it airs here.