The weather forecast heading into Halloween weekend was daunting, to say the least. With highs of 55 degrees and expected rain, Chicago’s festival crowd heading out to Freaky Deaky was met with a tough choice right off the bat: dress the occasion or stay warm? For this writer, the decision was quick. Hoodies and pants ’till I die. For most attendees though, the cold and rain was no deterrent for their wildest and most creative costume plans.

From clowns on four-foot stilts to literal “ghost” producers, Toyota Park’s crowd was a wash of color, masks, make-up and fake teeth. Together, we ran back and forth between the – crucially – heated tents that housed the three stages. The enormous canopies stretched impossibly far back and could barely contain the walls of lasers and strobe lights that pierced from the stage. From start to finish, Freaky Deaky was an immense, visual spectacle. Oh, and the music wasn’t too bad either. 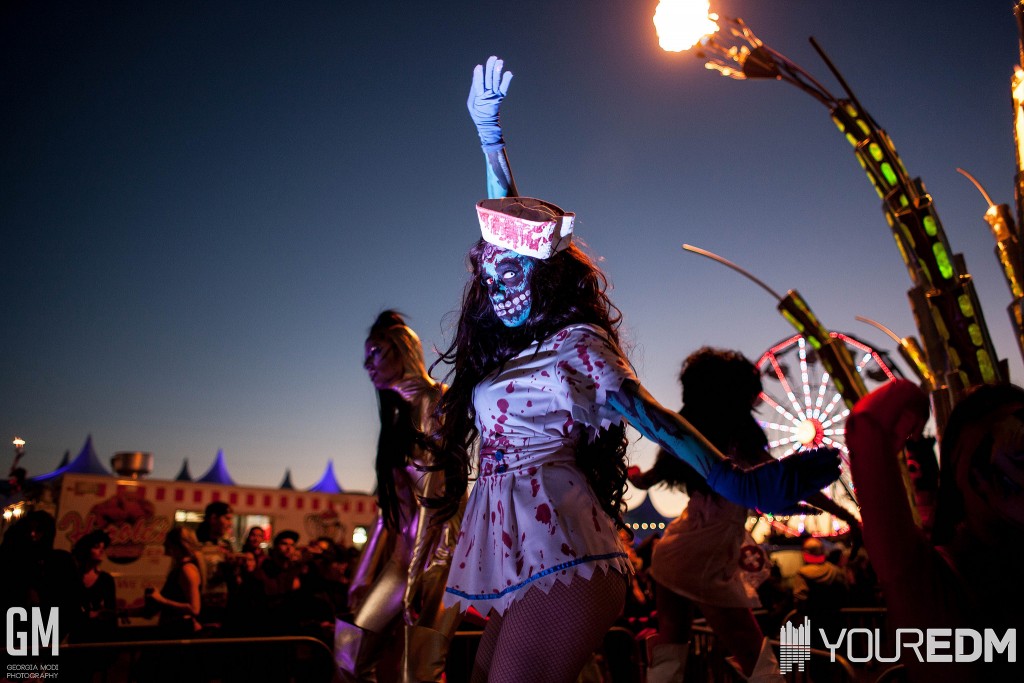 After spending over an hour in traffic driving southwest from Chicago proper with our photographer Georgia, we pulled up to the cold stadium parking lot and shivered as we passed through the gates. I headed straight for the Shrine stage to catch Tokimonsta‘s set, standing in the back of the nearly half-filled tent. Beginning with downtempo hip hop, she gradually moved toward faster-paced and more visceral tracks like SOPHIE’s “Lemonade” and the original “It G Ma.” Screams erupted when Joey Badass was brought on stage to sing their collaboration (hinted at in an AMA of hers a year ago). The close of her set was filled with bellowing trap classics and “Hotline Bling” sung in another language. 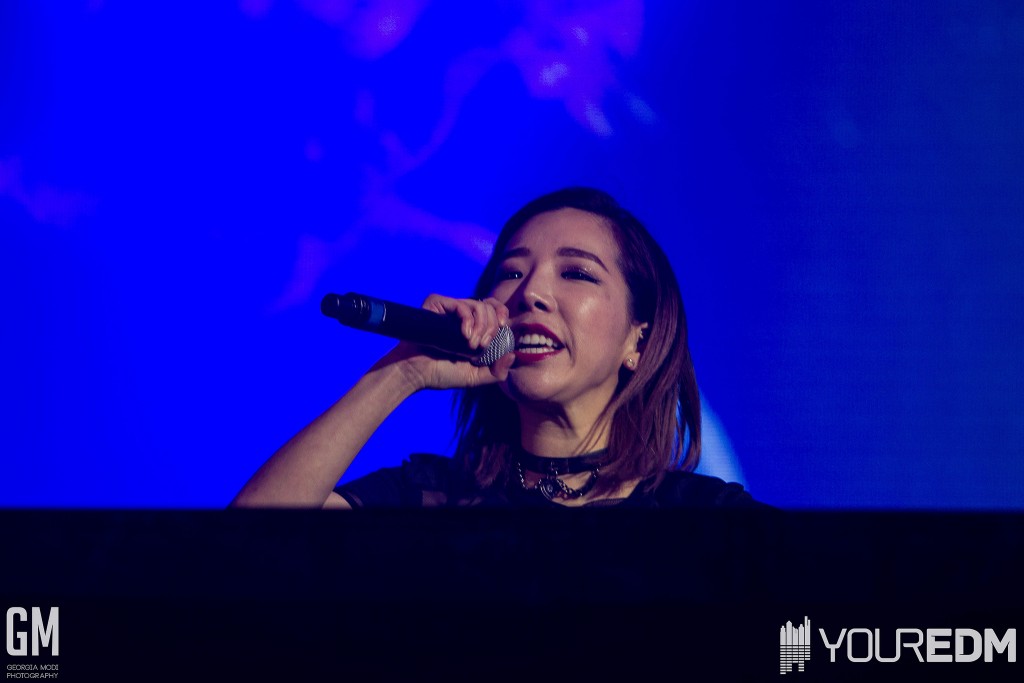 I migrated across the parking lot, now flushed in darkness save the illumination from the stages, booths, and bursts of pyrotechnics that spewed from the top of certain structures. For the next hour or so, I flipped back and forth between Borgeous and Sub Focus, seeing ten or 15 minutes of each at a time. With every new approach to their respective tents, the crowds stretched back further and further, bringing with them a consistently heightened energy and presence.

Flying Lotus took to the Big Top stage next. His production from start to finish brimmed with complexity; an ever-evolving train of abstract musical thought that incorporated elements hip hop, jazz, trap, rock and everything in between. Necks craned and heads bobbed over the side barriers throughout his time on stage. Even the security guards got into it, despite trying to stay professional and intimidating. His visuals showed bodies between stripped, scalped, and torn open while strobe lights flashed above the costumed listeners, perfect for the Halloween weekend. 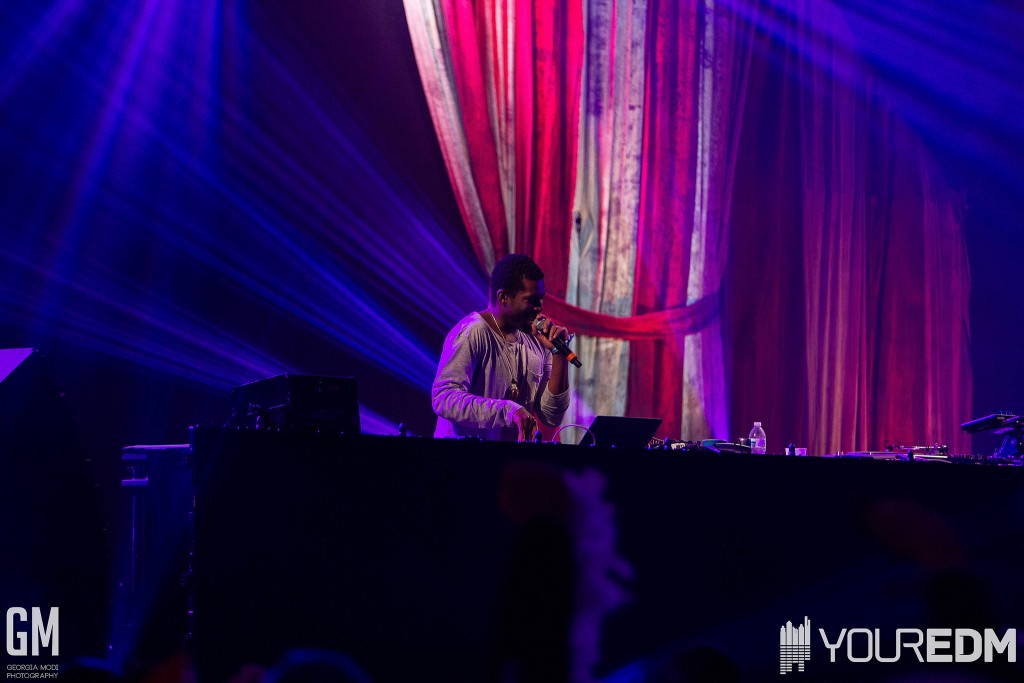 As I expected, Bassnectar was easily the most anticipated act of the night. Stories circulated the festival grounds of some “bass heads” arriving to Toyota Park hours before the gates even opened at 2 p.m., waiting at the stage’s front barriers for over seven hours to secure their spot. Finally, their time to shine had come. Rows of dedicated fans threw their bodies back and forth to the deadly bass and slow rhythms. Say what you will about Bassnectar, but he knows how to control a crowd.

I left the grounds still shivering, the wad of Kleenex steadily accumulating in my backpack from all the sniffling. Hopefully, I thought, the weather will lighten up a bit for Day 2.

I woke up the next day to the sound of rain hitting my roof. “Shit,” I said as I popped another Dayquil and saddled up for my long ride out of the city.

Oceanic puddles in the parking lot made the entry lines curve to the side in avoidance, with someone accidentally stepping back into the ankle-deep water every few minutes. I hopped my way along the islands and through the gates, rushing straight toward the smaller Crypt stage where Mr. Carmack was setting up his equipment. As one of my favorite artists, and the best set I experienced during August’s HARD Summer, I wasted no time shouldering toward the middle of the room. His time on stage was a whirlwind of strobe lights, chants, cheers and unexpected tracks. In addition to his usual material, Carmack ventured to play a drum and bass track and even a deep house drop. Once again, however, “Solutions” was my favorite drop of the entire weekend. Sorry, everyone else.

Riff Raff and Benny Benassi shared the seven o’clock spot in the two main tents, drawing bigger crowds before the acts second to last came on. By then, the rain had turned into a mostly infrequent drizzle, making the walk between stages much more bearable. 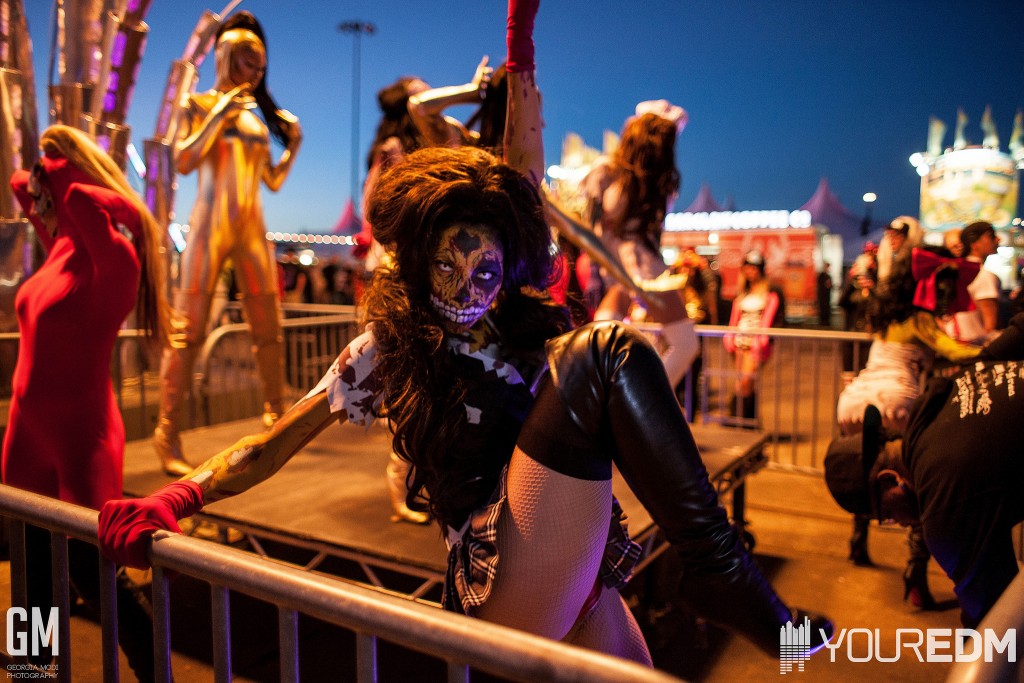 After the hour had passed, I established myself at the Shrine for Borgore‘s set. The tent was packed to the edges, and the energy was buzzing. Clearly, this would be a Freaky Deaky favorite. From unbelievable festival trap to face-melting dubstep, Borgore had the crowd in the palm of his hand for the length of his slot. Near the end, he introduced his fans to PRXZM, the duo featured on his recent track “Out Of My Mind.” Vocalist Emma Maidenberg sang in between bursts of glorious, head-banging madness.

The night’s headliners were Armin van Buuren, Big Gigantic and a DJ set by Gesaffelstein. With such a wide diversity of styles and fanbases, the crowds were nicely dispersed across the grounds. Unfortunately however, my sickness forced me to go into Grandpa Mode and grab an Uber before they were over.

The day began with a beautiful, clear sky and warmer weather than the previous two days. People continued to arrive at the festival in costume, including some of the performers themselves.

After watching Soulection’s Goldlink play an energetic and crowd-pleasing set of old classics and new fire, I headed to the Shrine stage for A-trak. After a few moments of sound difficulties, he emerged behind the decks dressed head to toe in full Batman garb. From “NRG” and a “Heads Will Roll” edit to a completely new single, A-trak wowed the loyal crowd with every genre under the sun. 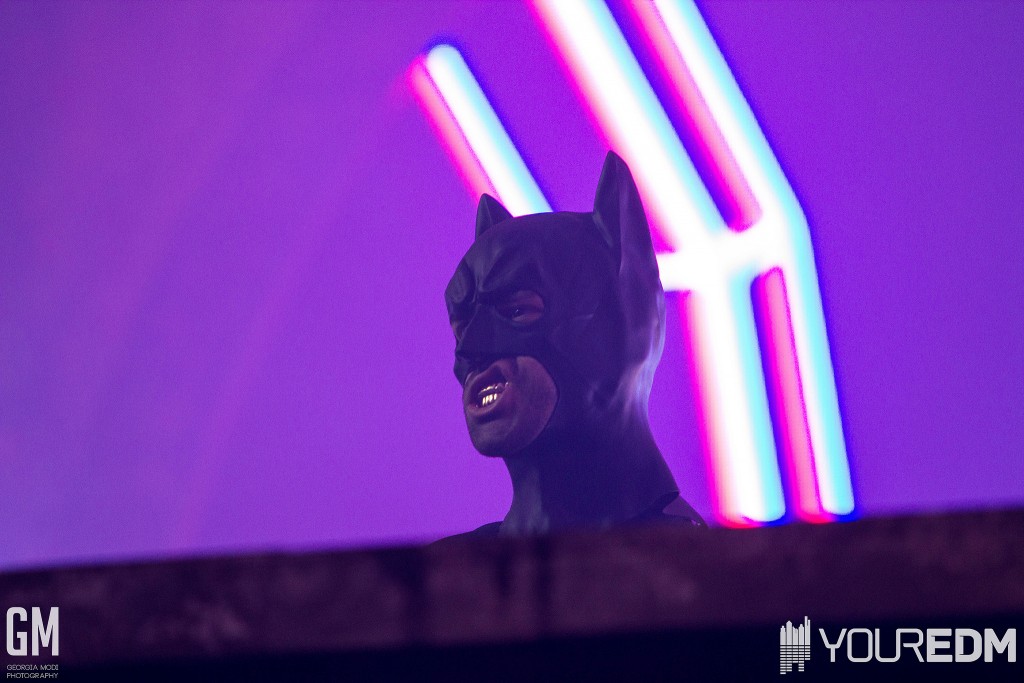 Watching Batman scratch in front of a packed tent of cheering supporters was something I was finally able to check off my bucket list.

After passing by Alunageorge and hearing her acclaimed “You Know You Like It,” I set up camp beside the Big Top for Datsik. Having seen him many times over the years, I knew it would be a must-see set – and boy was I right. The tent was stuffed with the Midwest’s most avid dubstep fans, packing in tight for Datsik’s last tour stop for three months. My notes during his show were the thinnest of the weekend, with only a few bullet points I was able to write down between the carnage: “crowd is lit AF, literally destroying, killing it, no words.” After playing a Red Hot Chili Peppers sing-along, Datsik premiered one of the wildest tracks of the evening: an unreleased collaboration with none other than Snoop Dogg. 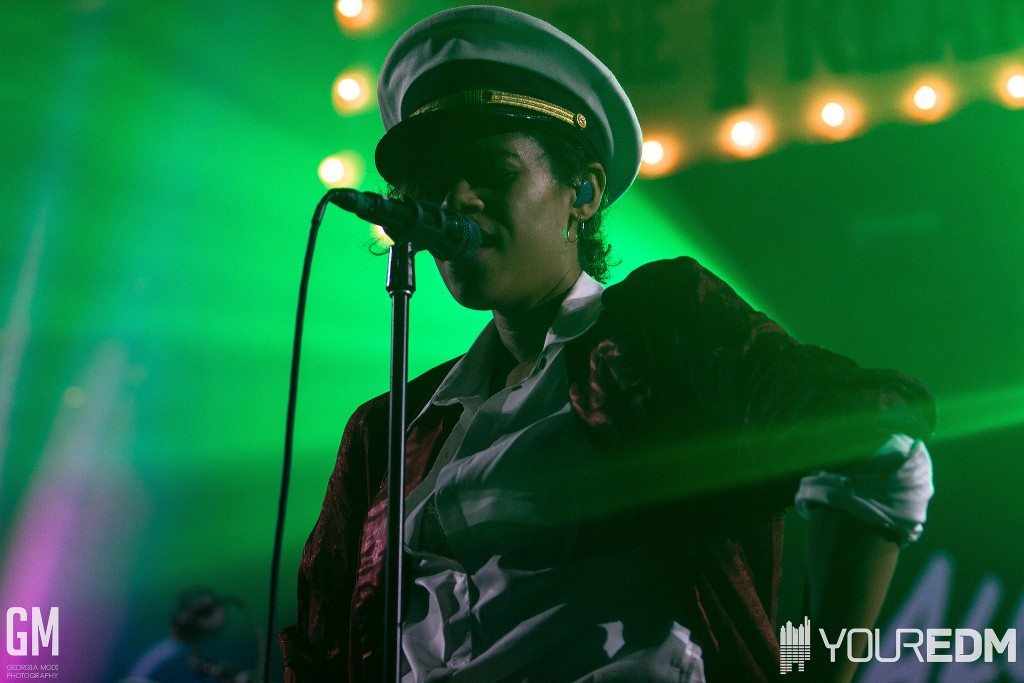 Last up was Carnage, who played a trap and hardstyle infused set worthy of the main stage. As someone who’s used to closing down festivals like Freaky Deaky, he had no problem roping in the crowd for an epic hour of screeching synths and rumbling sub bass.

Attendees left the Toyota Park lot with smiles on their faces. It was one of the last time this city’s dance music crowd will be able to throw down outdoors, as winter is quickly rearing its ugly head. In full Halloween spirit, Freaky Deaky created a unique and wholly enjoyable festival experience, one that I’ll be thrilled to return to next year.

For a full look at the event’s photo gallery, click here!